Two switch issue have crept into Pinbot over the last few months and I wanted to take a look at them. The first relates to the ramp switch, which lets the game know if the ramp is up or down. When the ramp is down, the switch should be activated. There are two coils which control the state of the ramp and if the switch is in the wrong state, the game will continually try and activate a coil. This was the behavior I was seeing. The ramp would be down, but the coil would continue to fire. 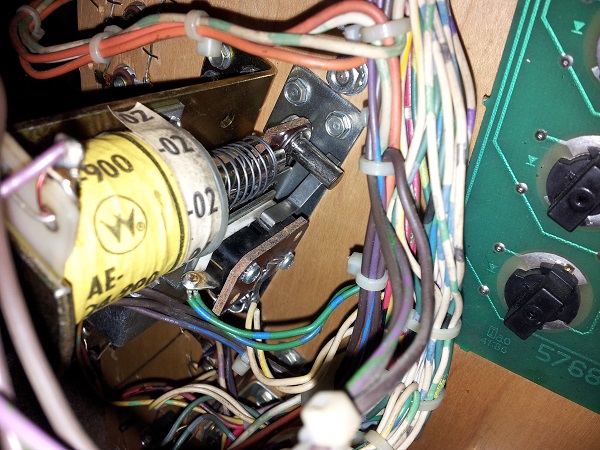 The microswitch has a small arm which is activated by a small metal post on the plunger. When the ramp goes down, this arm raises and activates the switch. The problem was the arm wasn’t quite pressing the small button behind it, to signal to the game the ramp was now down. This was fixed by a small adjustment to the arm.

The second switch issue I needed to address was with the credit switch. This one has been actually be an intermittent problem for awhile now. When you press the credit button to start a game, nothing happens. In multiball games, the game needs to have both balls in the trough before you can start (which activates two trough switches). If either of those switches is not activated, the credit button will be disabled. I went into switch test mode and found that both trough switches were activated. I then pressed the credit button and found that it was not detected – so the switch was the problem. I ran a jumper wire between the two switch lugs to simulate the blades joining and this resulted in the credit switch appearing in the switch test mode. This indicated an issue with one or both of the contacts on the switch blades. I decided to remove the switch for a closer inspection.

Looking at the contacts on the switch blades, both contacts have had a good chunk of their gold flashing taken off. 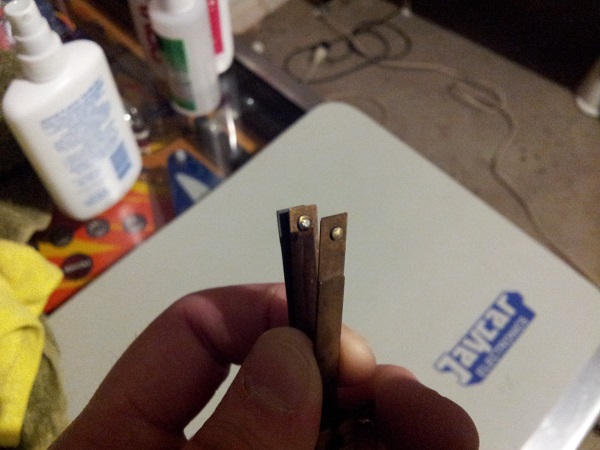 I have plenty of spare switch parts, so was able to build a replacement switch and wire it back into the machine again. On testing, the credit switch now appears in the switch test mode and I can start a game.