Fireball Classic – Under the Apron (Part 2)

Still working my way through the assemblies located under the apron. This time I’ll be focusing on the ball trough and ball eject assemblies. I also need to sort out an issue with the ball trough where the ball bounces back down into the drain hole.

First up though, time to pull the ball trough apart and give it a really good clean. Even at a first glance, you can see how much dirt has built up. 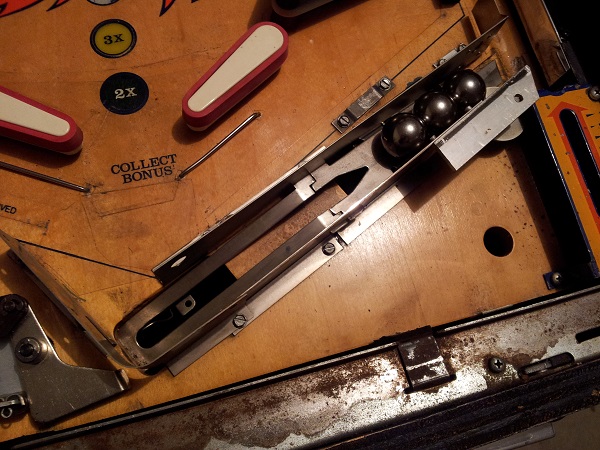 First thing to do was to start pulling the rails and ramp off the play field so not only could I clean them, but also clean up the crap that had collected under it all. 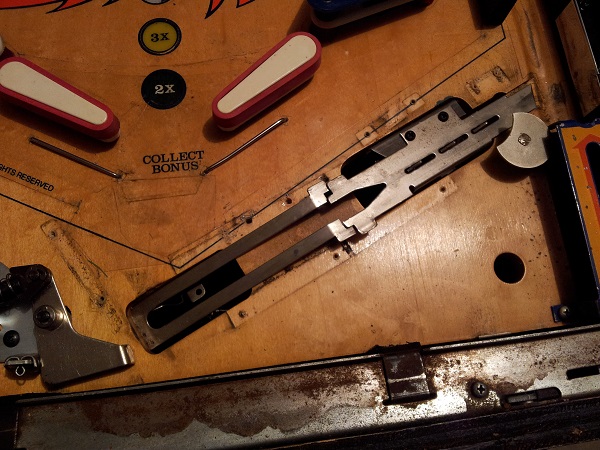 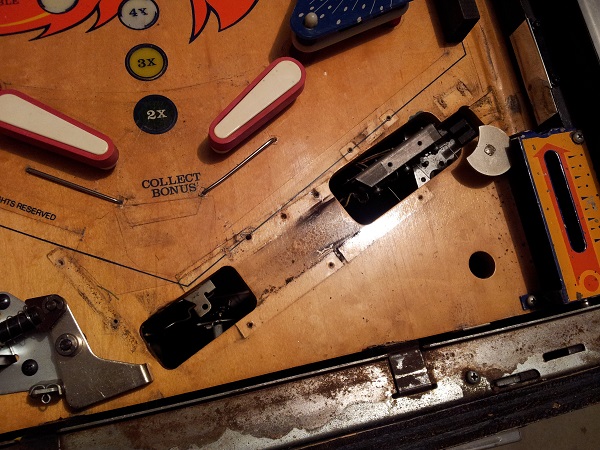 One thing I noticed as I was pulling the trough off the play field was this custom piece added to the ball trough. Someone has added this for whatever reason. I don’t mind so much except for the fact it covers a screw. Getting the screw out was a real pain the arse and I was almost tempted to get the drill out and put a hole through it while still on the play field. 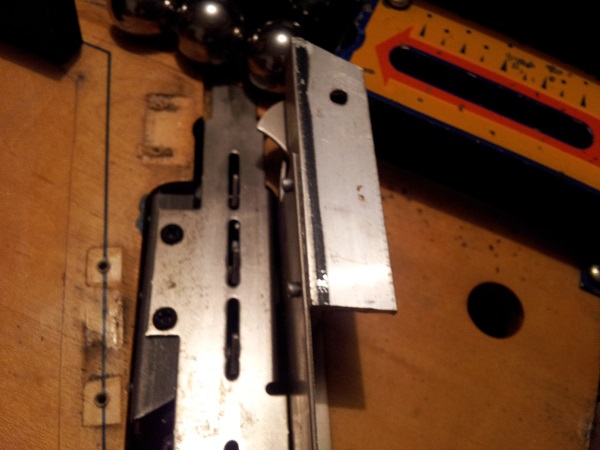 With all the parts off the play field, they were ready for a good clean. 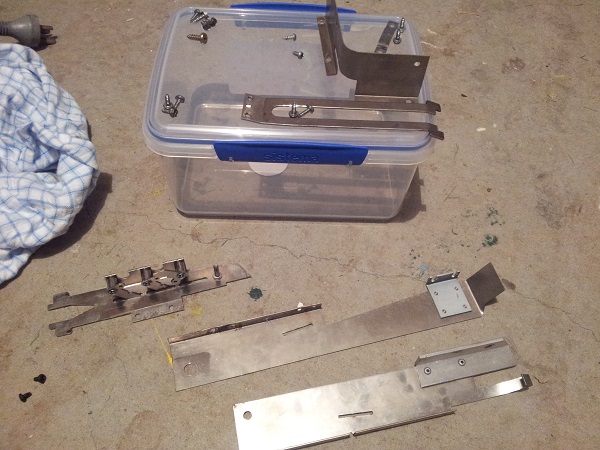 I took the time to give the play field a really good wipe down too. 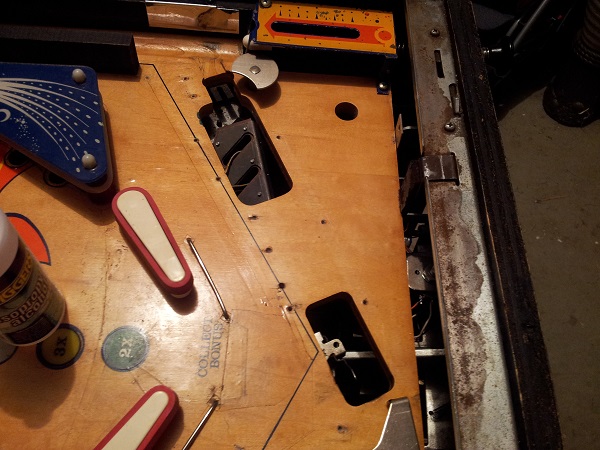 Under the ball trough lives a series of 3 switches. This allows the game to track how many balls are currently in the trough. The game will not start if it’s missing any of the balls, although balls can remain in either of the capture holes (as these count towards having 3 balls for use).

The switches are activated by 3 small teeth that sit just above the trough ramp. 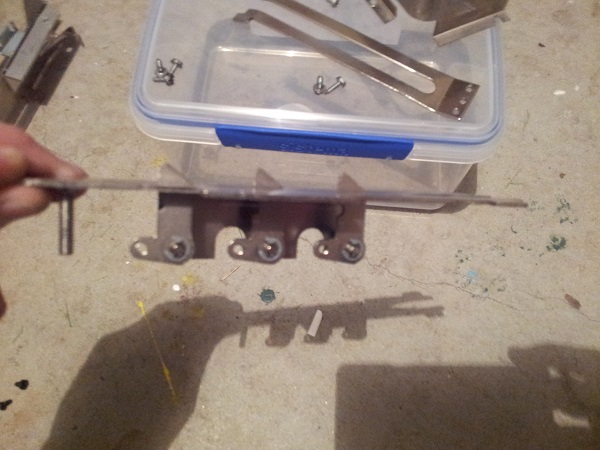 With everything cleaned, the rails and trough were reassembled. I purchased 3 new bling balls, which will be added to the machine at a later date (when I’m closer to completion). 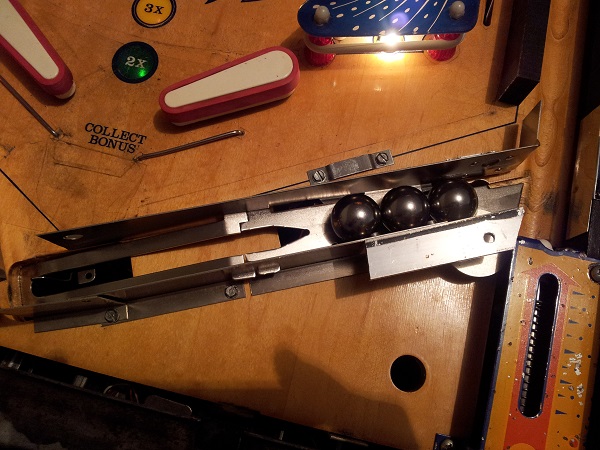 The last part to look at under the apron was the ball eject. At the front of the ball trough is a small disc with a section cut out. This prevents the balls from escaping into the shooter lane. When the game detects a ball is needed, a coil powers up and triggers the eject disc to spin, flicking a ball out into the shooter lane ready for use.

The assembly lives under the play field and it’s very close to being a flipper assembly (minus the EOS switch). 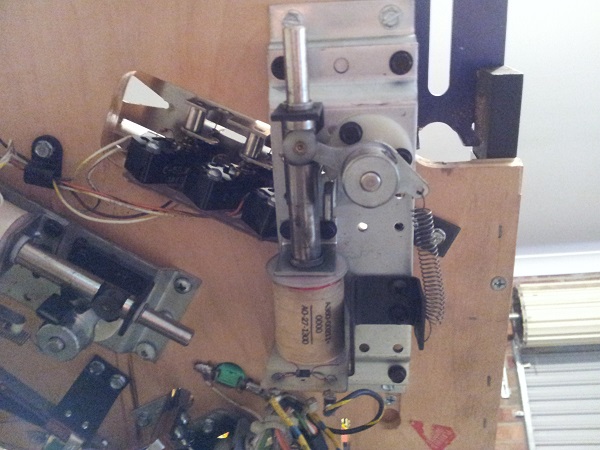 The assembly itself wasn’t too dirty, but since I’m here I may as well give it all a good clean. I pulled the assembly a part, ready for cleaning. I replaced the coil sleeve, although left the existing coil stop. 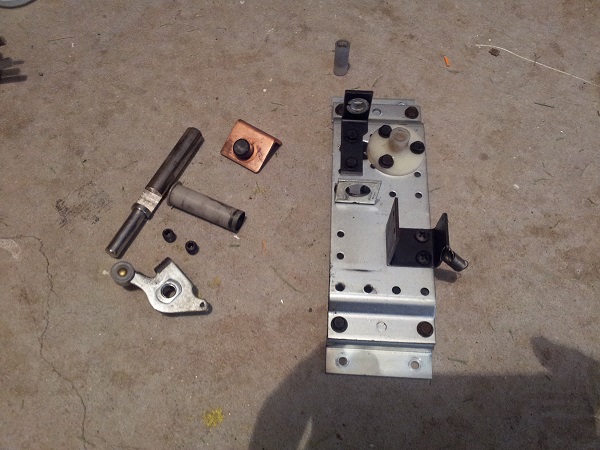 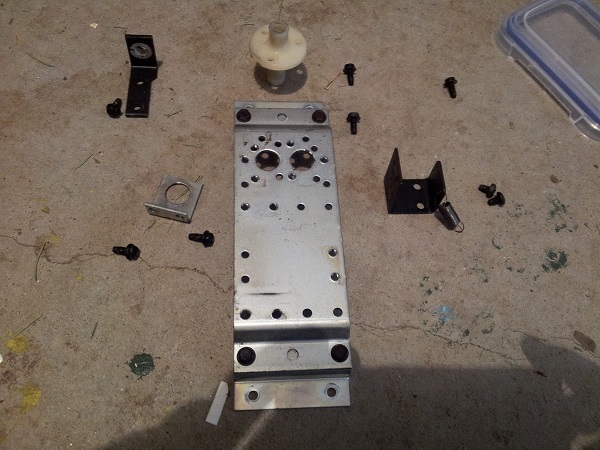 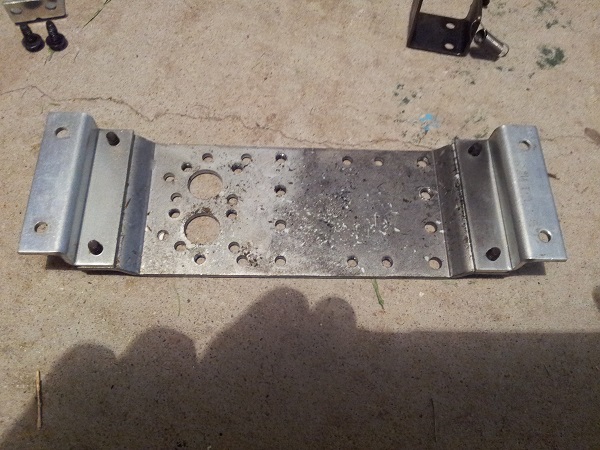 Once cleaned it was put back together and into the machine.

With that done, I was ready to try and sort out this ball trough issue. What would happen is this:

1) Ball drains and lands on kicker switch
2) Kicker fires and flings the ball up the ramp and into the ball trough
3) Ball bounces off other balls and goes back down to the drain hole.
4) goto 1

This would repeat over and over until the ball eventually would stay in position. Now this only occurred when there were already 2 balls in the trough. If one of the balls was locked on the play field, the issue would not happen.

With the apron off, I fired up the machine, placed two balls in the trough and then put one into the drain hole. Having the apron off allowed me to observe the issue.

At first I had thought the trough required a gate to prevent the ball from going back down. But there was no obvious point for a gate to be attached.

After watching the issue for a few minutes, I could see that the eject disc would spin slightly as the ball bounced into the 2 existing balls in the trough. Because that disc is attached to a spring under the play field, it bounces back, which then transfers momentum back to the last ball (like a Newtons Cradle you would see on an office desk).

I then spent time looking at the trough rails and found some room to adjust the angle of them. I also adjusted the default disc position. This made a difference but the problem still occurred around 30% of the time. I found a second set of screw holes under the play field for one of the ramps and so I adjusted the ramps to use this second set and finally – the ball would stay in the trough and not bounce back down. The position difference was only mm, but it was exactly what was needed.

The final issue with the trough to look at was having the game register that 3 balls were present. It has been an intermittent problem since I picked up the machine. After some investigating last week I found the issue was with the front switch (thanks to the switch test menu in test mode). While I had the assembly apart I had a closer look and everything seemed to be in order. I could hear the switch “click” when a ball rolled over it. I had a closer look at the wiring and found one of the wires was very loose – so loose it came away from the plug with minimal effort. 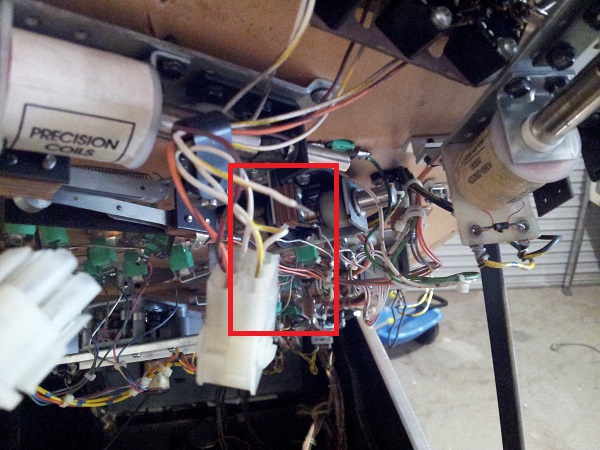 I resoldered the wire and tested again – the switch was now working correctly. I’ll be keeping an eye on it since the problem was intermittent, but I did find a smoking gun – so suspect it has now been fixed.

Next up will be the flippers..