The first issue I wanted to look at was the lack of sound. Although I could play a game on the machine, I got no sound at all in most cases. When I could hear sound it was very very quiet or distorted.

I went into maintenance mode using the switch inside the coin door and to the sound test mode. I couldn’t hear anything.

There is a volume control inside the coin door which I adjusted. Again no sound.

Next up I wanted to check the plugs and sound board in the head box. 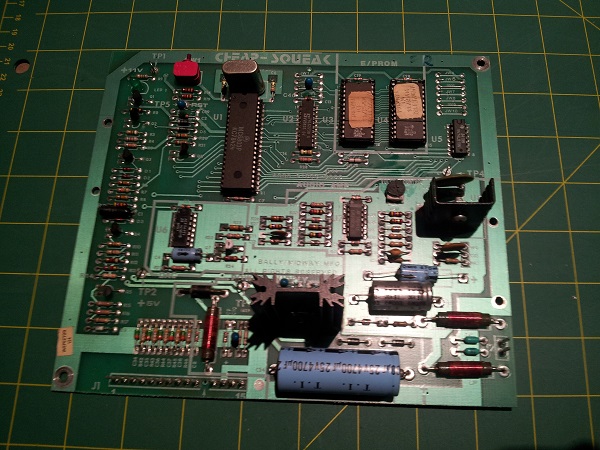 I went and did some googling on the cheap squeak board and Fireball Classic to see if there were any common issues (or issues people had encountered and resolved). In a few places I read the volume pot on the sound board was prone to fail. An easy solution to it though was to spray it with some contact cleaner. I had some on hand so gave it a go. A few gentle sprays followed by rotating the pot left and right to its extremes. Set the volume low again and turned the machine on. This time – there was sound!

I fired up a new game and tested a lot of the sounds in game – everything seemed to be playing correctly.

I had a quick read of the manual and found there are actually 4 different “modes” you can set the sounds to. Two of them are for chimes, while the other two are for what they call “noise” which is just more advanced sounds. I set it to mode #03, which is “noise” with background music.

Next up was to test the volume control inside the coin door. This didn’t have any effect on the volume. I pulled the potentiometer off the door, gave it a good clean and tried again. No change. Sound playing, just no change in the volume. 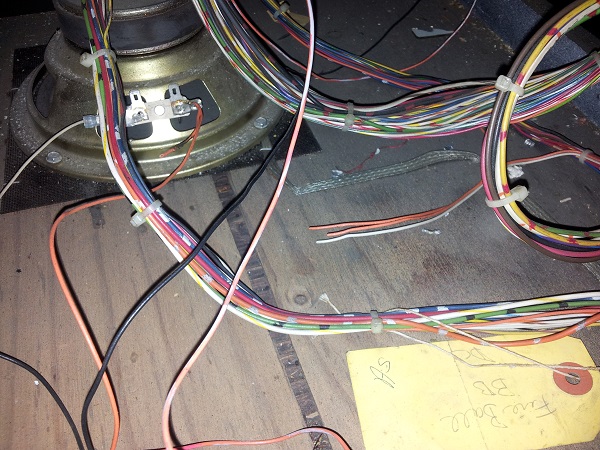 Two of the wires were coming from the coin door – orange and white, while the second orange wire runs down from the head box.

Looking at the cheap squeak, J2 has two wires Orange and Black which run down into the body.

Next to the cut wires was this:

So now it was easy to see why the volume pot on the coin door was having no effect on the volume – it was completely disconnected and the cheap squeak had been corrected directly to the speaker. 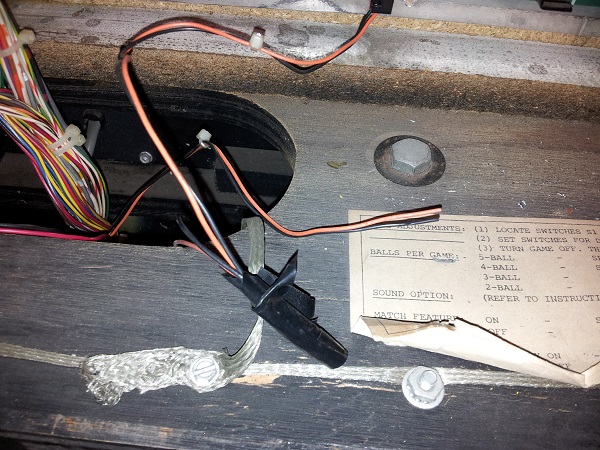 I fixed up the wiring to match the schematics show in the Fireball manual. This is how it should appear: 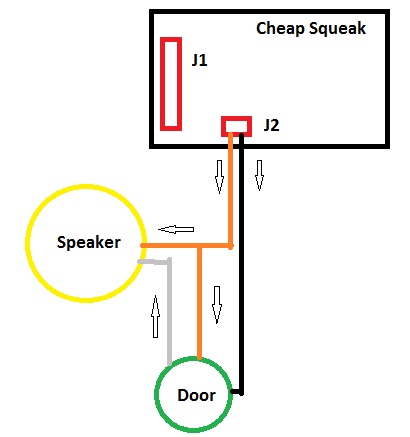 This now allowed me to control the volume via the pot on the coin door – but there was still an issue. For at least 3/4 of the volume pot – there was no sound. Only at the end of the pot was the sound audible. This isn’t what I expected – I should get a nice range of volume for the whole pot.

I pulled the pot apart and gave it a good clean. There were no dead spots that I could see. Put it back together and soldered it back into the machine. Still not good. I still had to turn the pot 3/4 of the way to get any sound.

After doing some research, I decided it was worth replacing the pot. I picked up a 50K and a 5K pot to try out. I noticed that the pot in the machine was not the original one. The shaft had been cut down to size (and on an angle). I reached out to a few people who owned Fireball Classics to see what they could tell me.

I was supplied with a number of photos which backed up the wiring fixes I had made – so that was at least one step forward.

From the behavior I was seeing with the 5K and 50K pots, I believe the issue to be the pot resistance. I suspected the pot should be less than 5K. The schematics didn’t say anything but thankfully doing a search for the common part of those two numbers turned up something. A link where the coin door pot is discussed briefly: Link

I wasn’t able to source a 100ohm pot, but could get a 1K pot from my local Jaycar store. I’ve done a lot of searching online for a 100 ohm log pot, but not had any luck finding one. After installing the 1K pot and testing, I get much better control over the sound from the coin door.

If I can track down a 100 ohm pot, that will be ideal, but at least for now – the sound is working and the coin door volume control is back in and functional.