The drop targets – one of the final elements of the game to receive my attention. The Nugent playfield has two banks of 3 drop targets. The first set (located on the left of the playfield) control the special bonus (which is an extra ball & 100,000 points). The second is located on the upper right and controls the bonus multiplier (x2, x3 and x5). Both sets are functional, although sometimes it does not detect when all 3 targets have been dropped (more on this later). The blue star decal on all 6 targets is worn and the white has faded over time. There is also some dirt build up on the targets and the assembly under the playfield.

This is how the drop targets looked to start with: 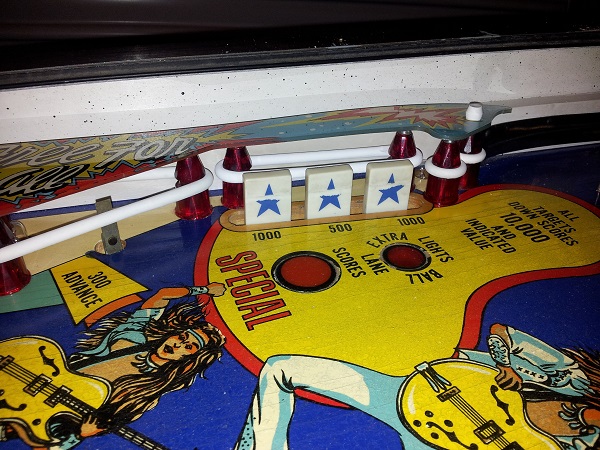 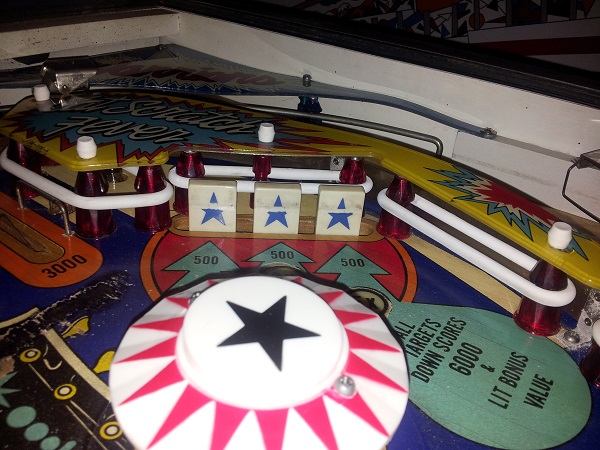 Originally I was going to just replace the drop targets. I purchased a set of 6 targets from MarcoSpec, but these turned out to be a little different in shape to the originals. The originals are referred to as “tombstones”, and looking at their shape you can see why. The new ones have an extra lip on top. 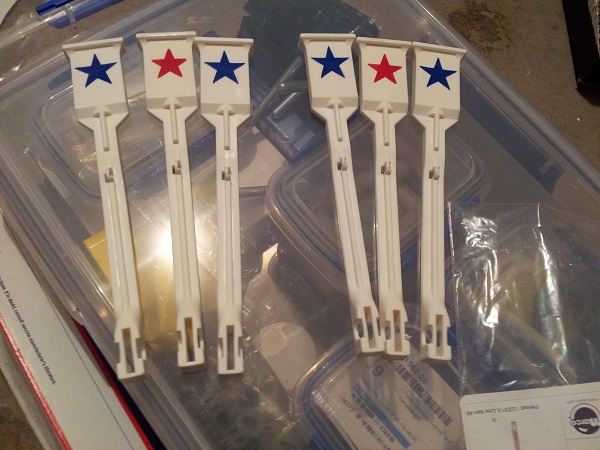 Since the original targets were not actually broken, I was keen to keep them. With some encouragement from a friend, I was able to find some decals (which were much cheaper) and would let me keep the original tombstone shape targets. I can clean the targets up a little, but they will still show the faded white colour on the sides and top – but I prefer the shape of the originals, so I’m going to just clean and add the new decals. 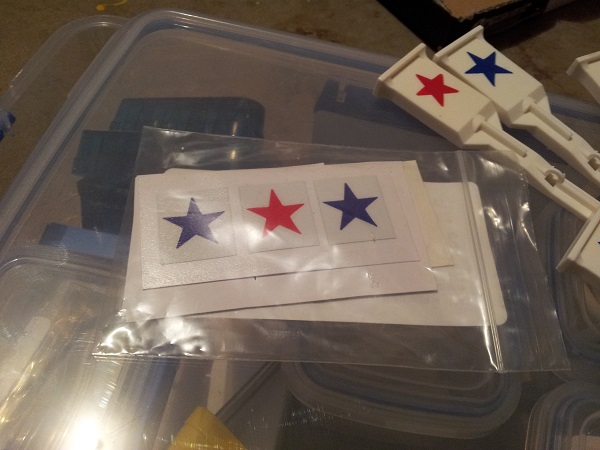 First up was the bonus target bank. The photo shows it off to be cleaner than it really is. The plunger is sticky, and uses an aluminium coil sleeve. The springs are a little sticky too. Lots of dirt inside the base of the assembly and the switches could do with a clean too. 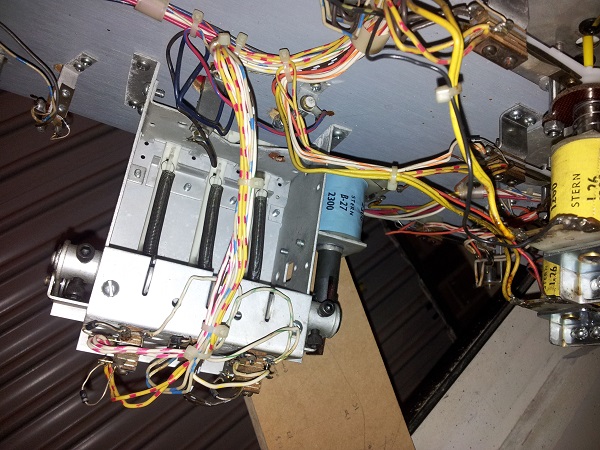 An interesting thing I noticed on this bank was the two outer switches have some sort of double switch on them. Not really the best photo, but I don’t understand why these two switches have a double switch, while the other 1 (and 3 on the other bank) all have a single. Thoughts? 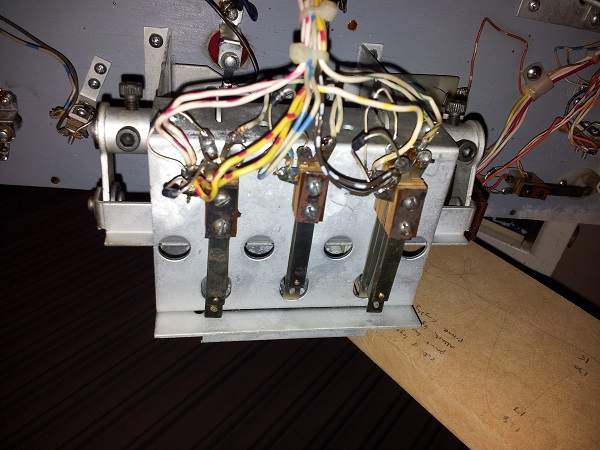 First step was to remove the switches and the coil. Once that was done I could then undo the 4 screws holding the assembly to the playfield. With the parts removed, I put them on the ground ready to disassemble, clean and put back together. An interesting thing I found here was on the second bank of targets, only 3 screws were used. The 4th screw hole had been predrilled, but never used. It’s certainly held in place firm with 3, but why not use 4 like the other? 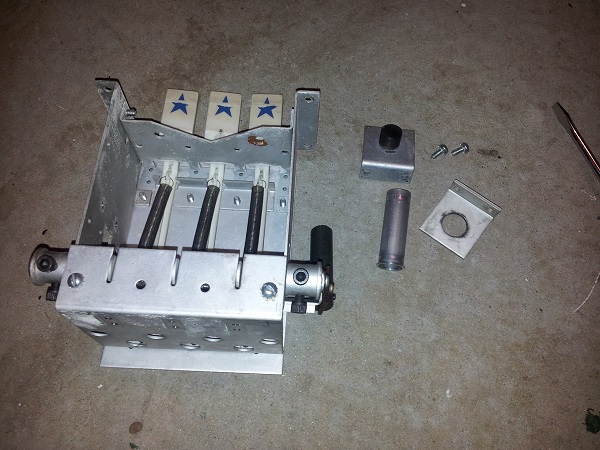 At this point a took a few photos of the assembly to make sure I could get it all back together in the correct order. I found the positioning of these plates interesting in that the back plate sits inside the base. Took a photo to make sure I remember this as it seems like something easy to miss. 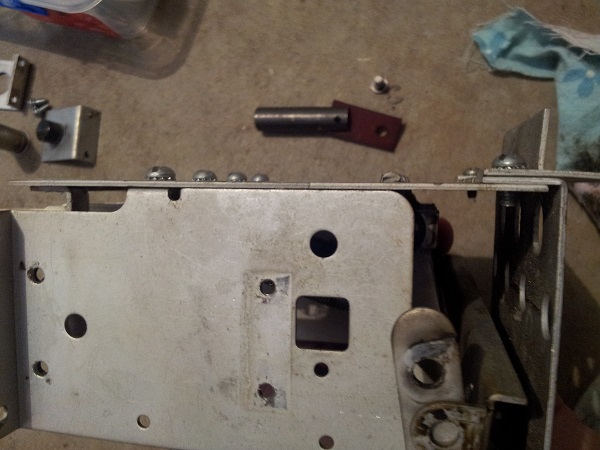 At that point I was ready to undo more screws and pull it apart to clean up. 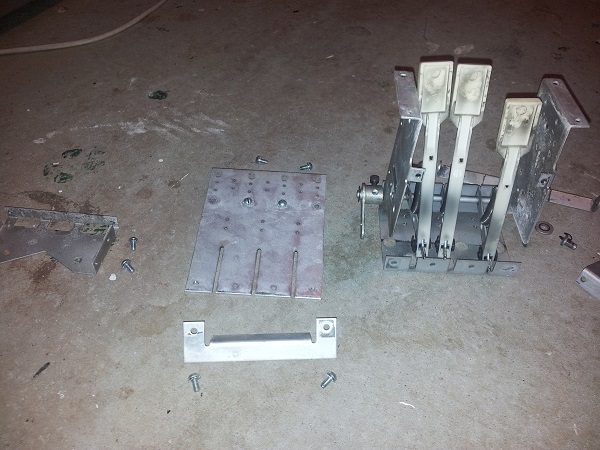 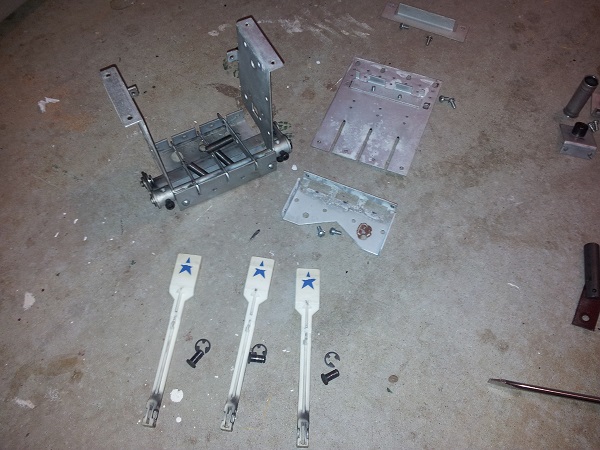 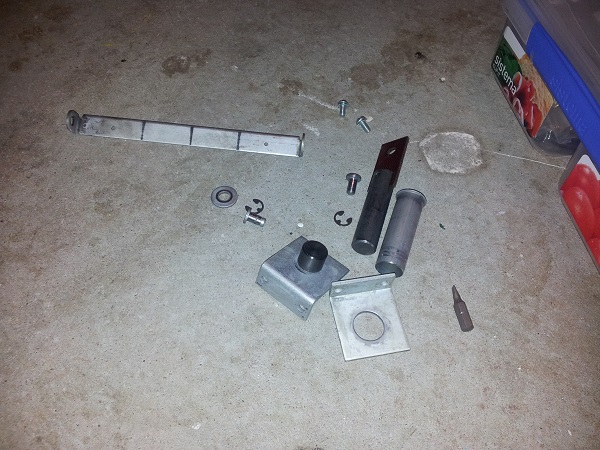 The assembly from the multiplier bank was dirtier and needed some more attention. 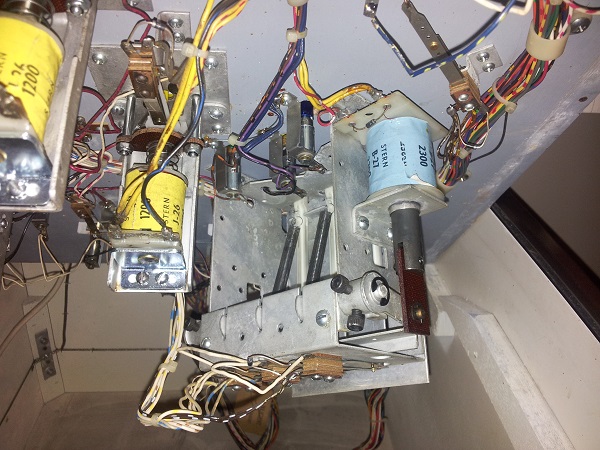 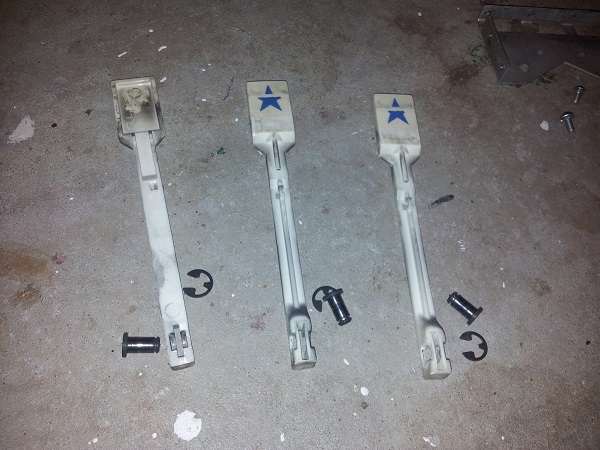 I took my time and cleaned parts as best I could. Even used a bit of novus on the drop targets once clean to try and bring them back to life a little. I then added the decals to each target. I decided to having a red star in the middle and a blue start on each outer target to spice it up a little.

I took some time to clean all 6 switches too. I need to order two new coil sleeves to replace the aluminum ones also. Those will be easy to replace though and won’t require me to pull the whole thing apart again thankfully.

With everything back together and installed again, the drop targets were looking nice: 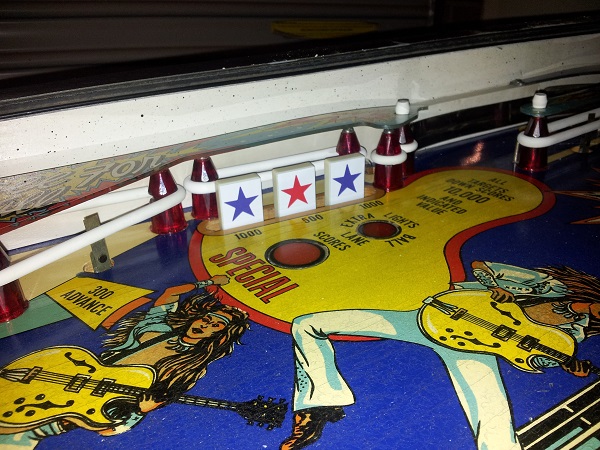 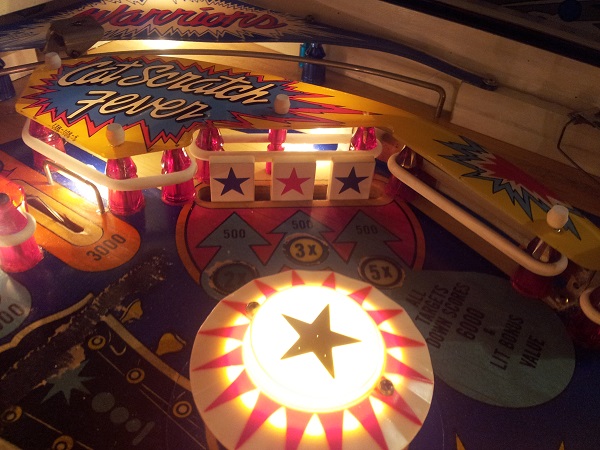 I mentioned at the start of the post about the drop targets not always registering and i’ll go into that more now. I have noticed this issue on both banks – occasionally during a game, I will drop all 3 targets but the game will not register that it’s happened. i found that if I hit certain areas of the bank again (with all 3 targets down) the game would eventually recognise they were all down and then award the bonus or advance the multiplier.

At the start of each ball, both banks reset. It really stood out one game a few weeks back where I had dropped one of the multiplier targets but at the start of a new ball, the bank did not reset. This gave me a big clue as to which target on that bank was not working correctly.

I put the game into test mode and started knocking the targets over with my finger to try and replicate the issue. The target on the right had an issue where 3 out of 10 times, it would not register. As you can see here, the far right target has been dropped, but 0 is showing on the display (meaning no switches closed). 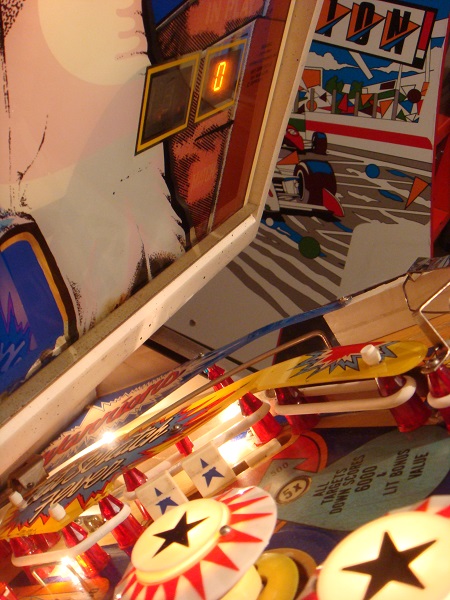 I repeated the same test on the other bank of drop targets, but could not get any consistency in replicating the issue.

The solution to the problem was a slight adjustment in the alignment of the switch at the base of the drop target assembly and a clean of the connection using some thin cardboard. I did this across all 6 switches and tested all of them for about 10 minutes. I made sure to apply different amounts of force with my finger and the issue has not occurred again.

So that’s it for the drop target 🙂