After doing some work on my Nugent yesterday, the game play had some scoring issues. The game would start fine, but the moment the ball was in play, I was being awarded many more points than I should have been. Further to that, certain targets failed to register and some roll overs would cause the lights to flicker.

I took the glass off, started a new game and hit each target with my finger. I narrowed the issue down to the three roll overs at the top of the play field and the static target. All other targets and roll overs were functioning fine.

I then put the game into test mode and found that switch #4 was stuck. Looking at the Nugent manual. Switch #4 was the left and right roll overs at the top of the play field. Ok, so getting somewhere.

I got under the play field and had a closer look at both switches – they both appeared to the fine, but I used a business card to clear the contact on the switchs. Jumped into test mode again, but the issue was still there. Next up, I removed the left roll over switch completely and ran test mode again. The issue still existed. I put the left switch back into place and then removed the right switch. Running the test again gave the all clear.

So the right roll over lane was causing the stuck switch – but how? The connection was fine and it was not making any contact. After looking at the switch from several angles, I noticed that the metal base of the light bulb was touching the roll over wire frame. I pulled the bulb back and ran the test again – success! The metal base of the bulb was shorting out the switch, forcing it to be stuck (closed). This then flowed onto the static target as it was connected via a ground.

The image shows the bulb moved back, away from the frame to fix the problem. 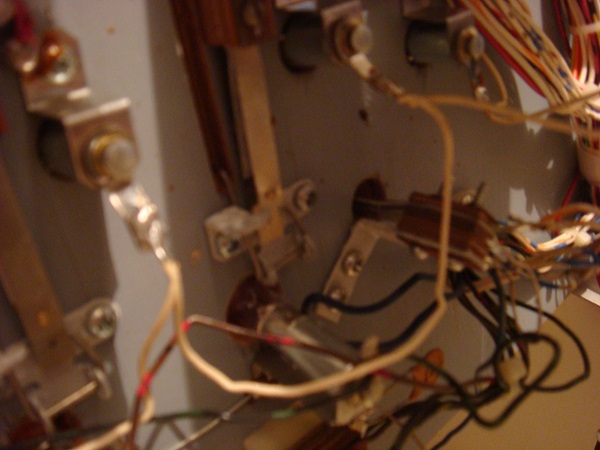 So the whole scoring issue was due to a stuck switch – and the switch was stuck because of a bulb touching the metal frame.