Welcome to the fourth installment on the repair and service of a Williams Funhouse. With the lower and middle playfield sections completed in previous updates, this one will be focusing heavily on the upper playfield area. I want to get a few cabinet touch ups done too as they have been on my to do list for awhile. So far the machine has been coming long great and I’m looking forward to getting it all back together for some testing. The upper playfield area is quite dirty, but everything is there so a good clean should bring it up nicely. 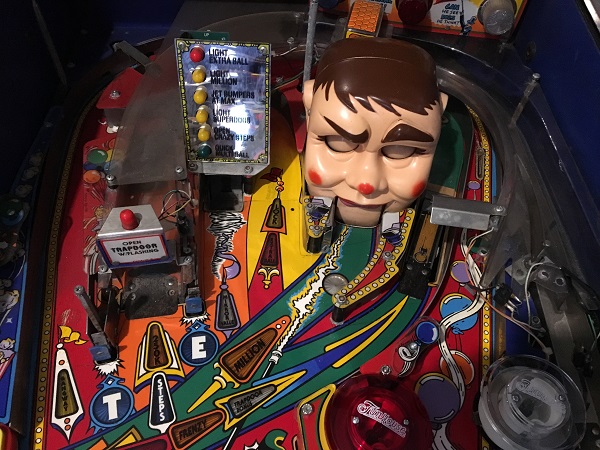 First step was to get the second ramp off the playfield, along with the billboard. This would then give me access to the plastics, rails and well, everything at playfield level so I could remove for cleaning. A constant layer of filth was found across the lower levels of the playfield. But not much damage, which is always a positive. 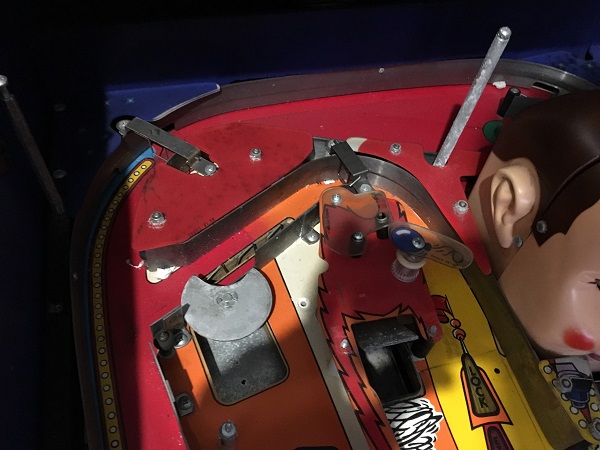 The right side was the same – dirty, but will clean up just fine. 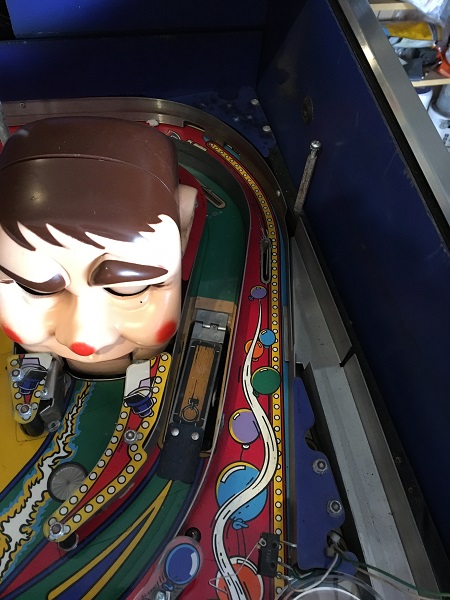 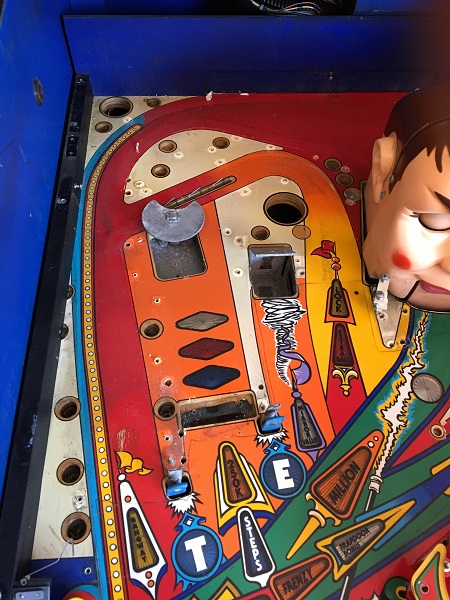 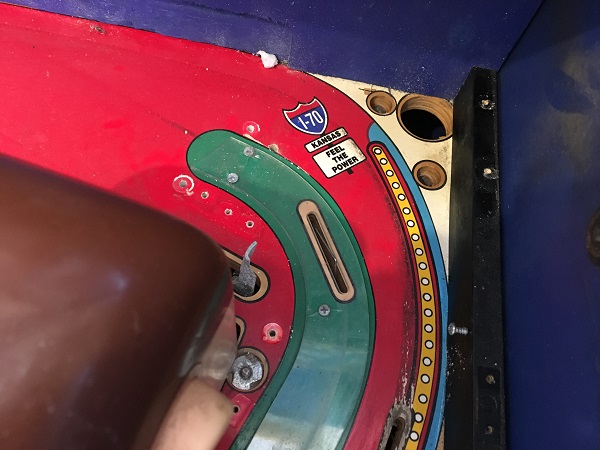 With all the parts set aside for cleaning, I could now clean the playfield. The playfield was wiped down and the filth cleaned away, leaving the playfield looking much nicer. 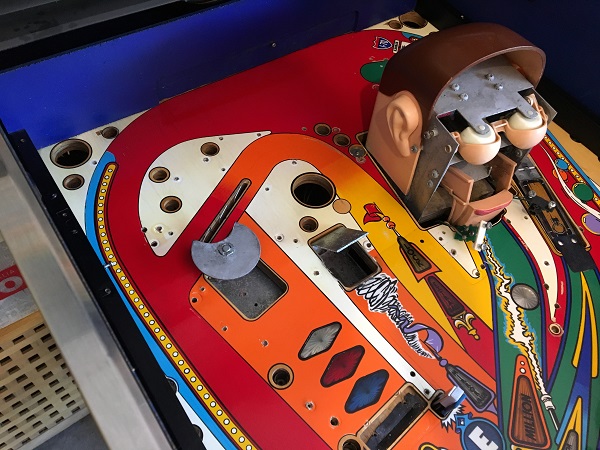 All the ball trail and marks from years of play cleaned away nicely. There is a little bit of playfield damage on the right lane (just above the switch) and I will put a small piece of mylar over this to protect it. 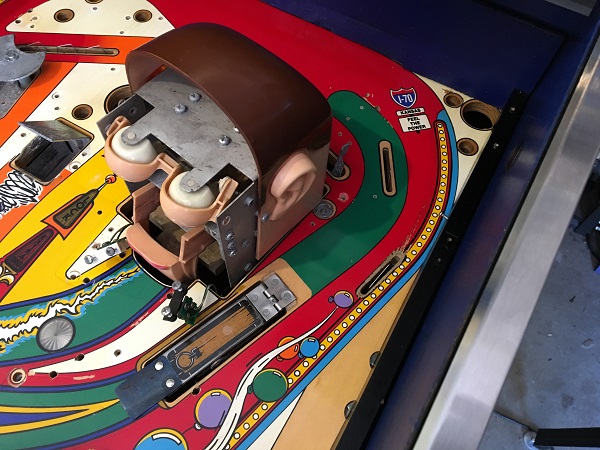 The upper playfield plastics had been set aside together for cleaning. There wasn’t much warping or damage on them thankfully. 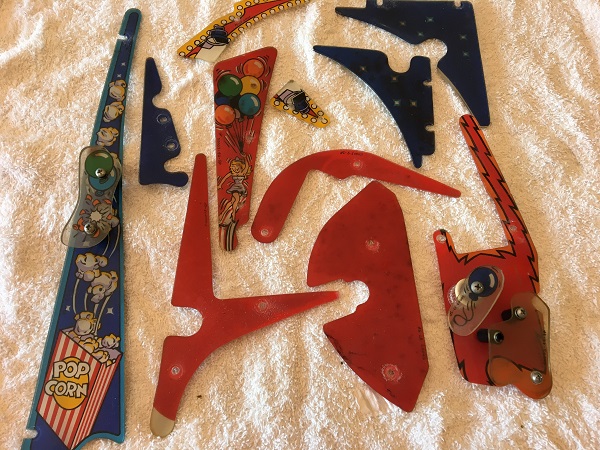 Each plastic piece was cleaned and then polished with Novus. The larger pieces were disassembled for cleaning too. The undersides of each piece were also cleaned as they were quite dirty. The plastics are in pretty good condition though with not much damage outside a few minor scraps on the under side. After cleaning they were put in a bag to protect them until ready to be installed back on to the playfield. 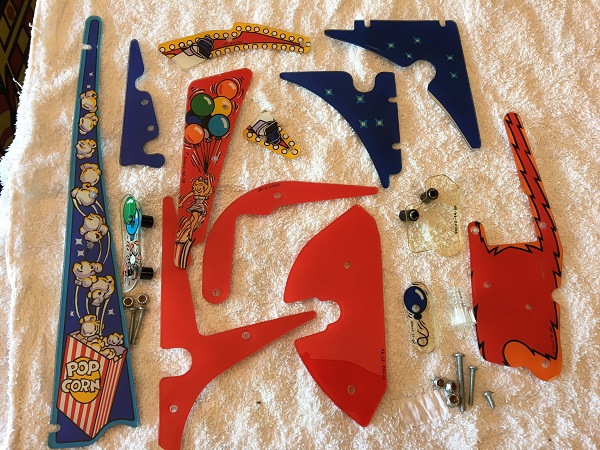 All metal rails, guides, gates, spacers and posts were cleaned up. Anything small enough was put into the tumbler while the larger things were cleaned by hand. 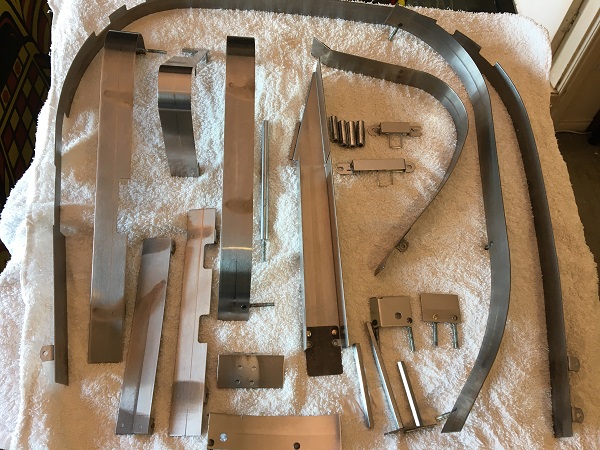 Three assemblies from the upper playfield area were disassembled and cleaned. These are for the ball lock, hideout kicker and ramp diverter. Again anything small went into the tumbler and large things cleaned by hand. New coil sleeves were purchased to replace the old ones. 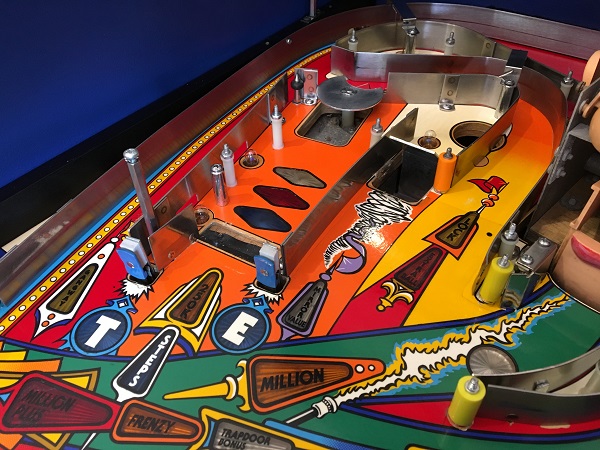 The upper playfield area was coming along nicely and looking much better. 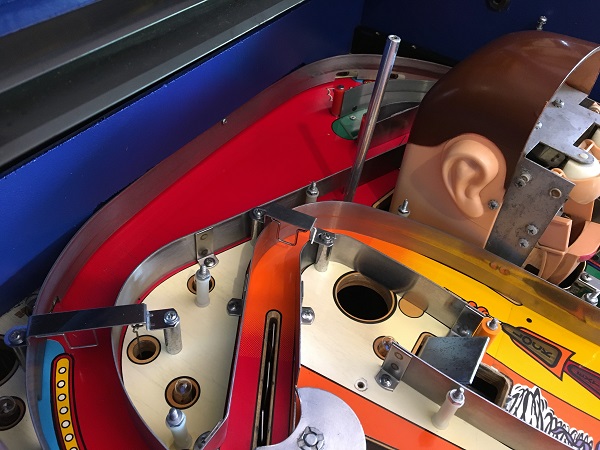 On my to do list for awhile has been to touch up the blue paint on the inside cabinet panels. The inside panels of the cabinet are a bit scratched up from years of service. It’s easier to do with most things off the playfield, so now was the time. 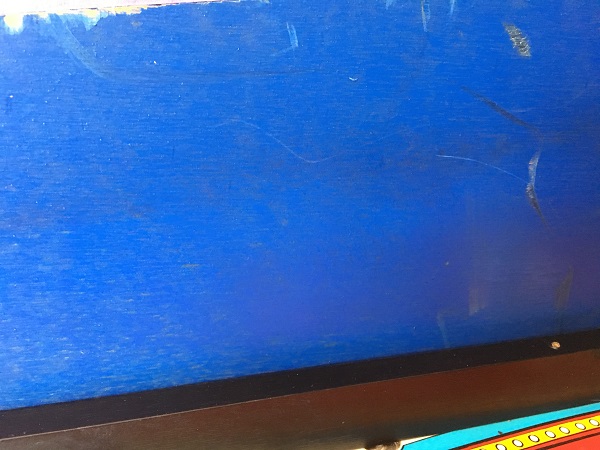 The side and rear panels were wiped clean, lightly sanded and then repainted to bring them back to life. This will look even better once the lamps are on and shining off the fresh surface. It’s a small thing to do, but adds additional presentation to the game. 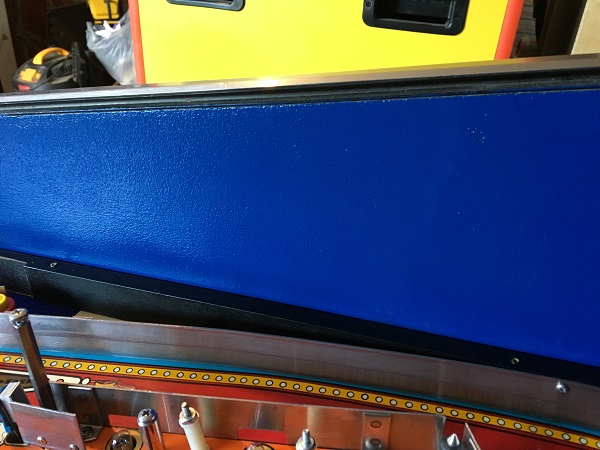 Lit up, it’s coming together nicely. 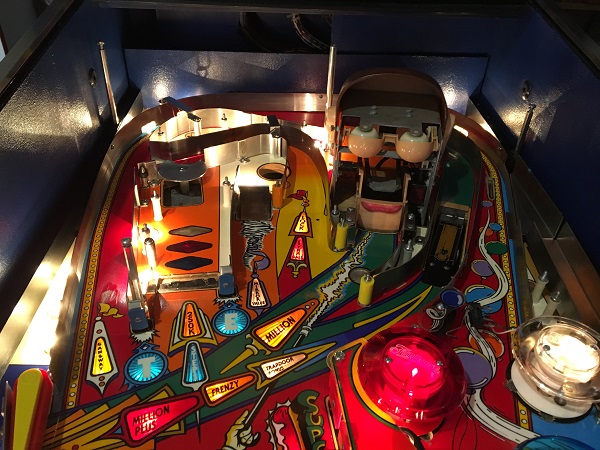 Next up was Rudy. The whole assembly is attached from under the playfield and can be removed. 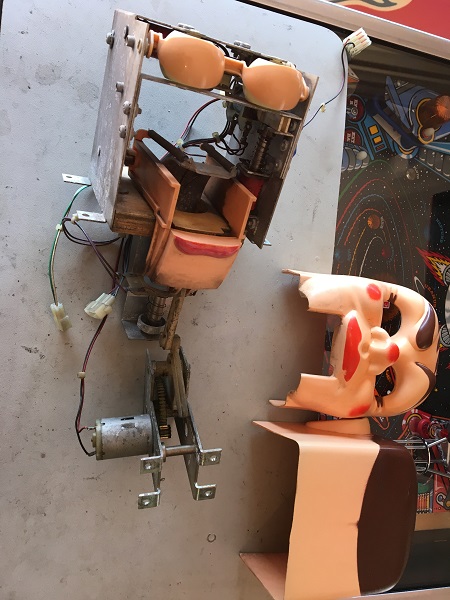 The face pieces were cleaned up and the chute assembly disassembled and cleaned. Inside the head was wiped down and the coils controlling the eye movement wiped down. 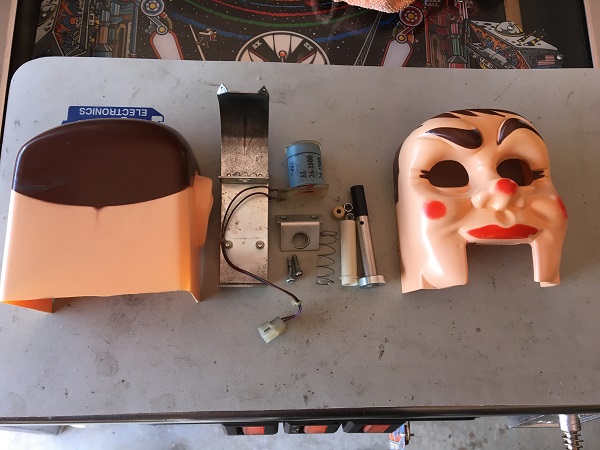 Next up I wanted to address the billboard. There was some damage to the underside of the mirror panel, where a section of the reflective surface had been eaten away. 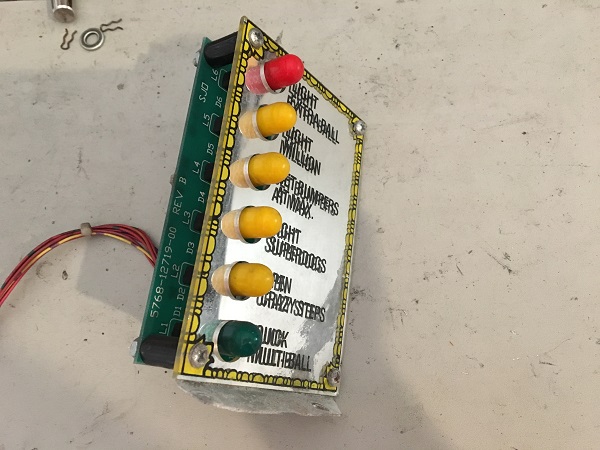 Initially I had been in two minds about replacing it. With all the clean up being done around the machine, the damage would let the presentation of the game down a bit. It’s not that expensive to replace, so decided to go ahead and order a new panel 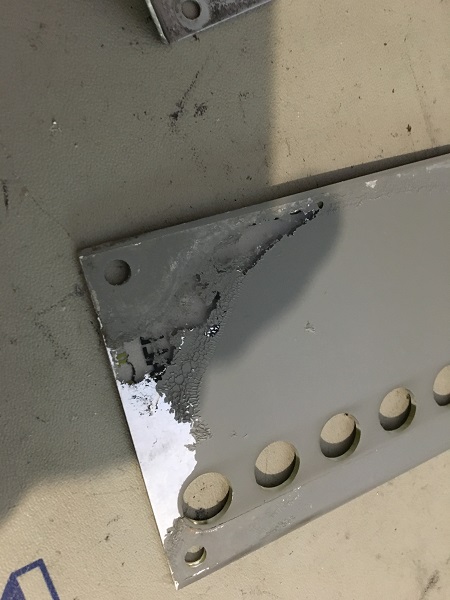 The new panel arrived and was swapped on to the billboard. The condom covered globes were replaced with coloured bulbs, which I think look way classier (especially when lit up). 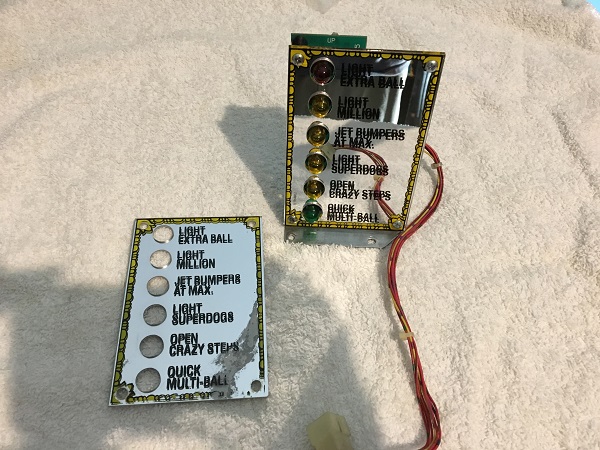 The billboard was installed back on to the playfield, along with all the plastic pieces. Rudy’s lower lip was repainted. The upper playfield section is looking so much nicer now. 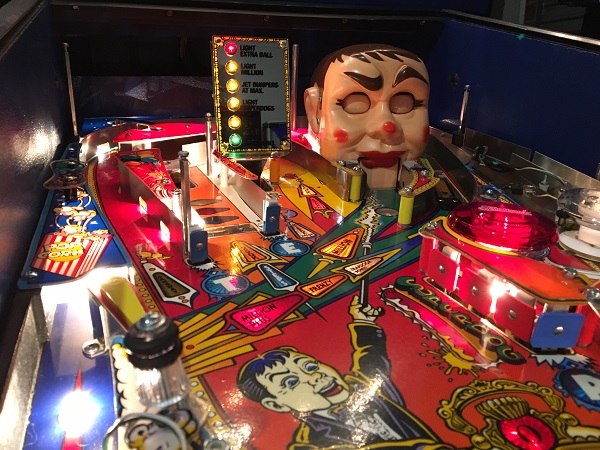 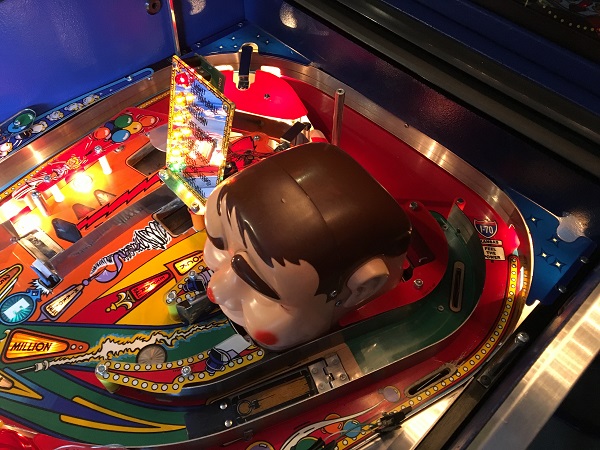 When the owner dropped the machine off, he pointed out some damage to the rear of the cabinet. Sections of the rear rails had broken off and he wanted them replaced. Also, it was missing the headbox latch and asked to have one installed. 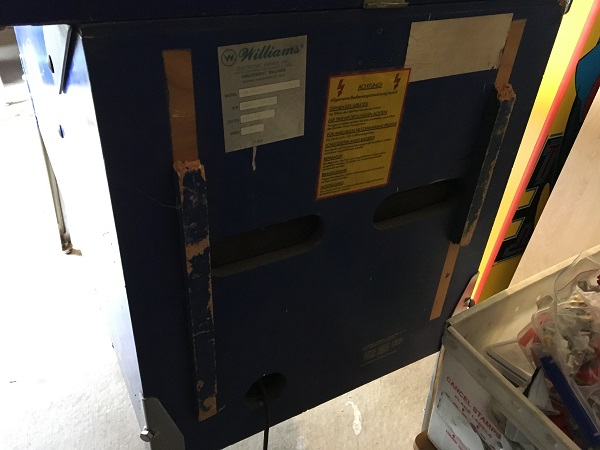 The remnants of the old rails were removed and the surface cleaned. New rails were cut and then attached. The rear panel was then masked off, repainted and new white gliders installed. I had a spare headbox latch, which was installed too. Blue cabinet protectors for the legs were installed, along with new leg levelers. 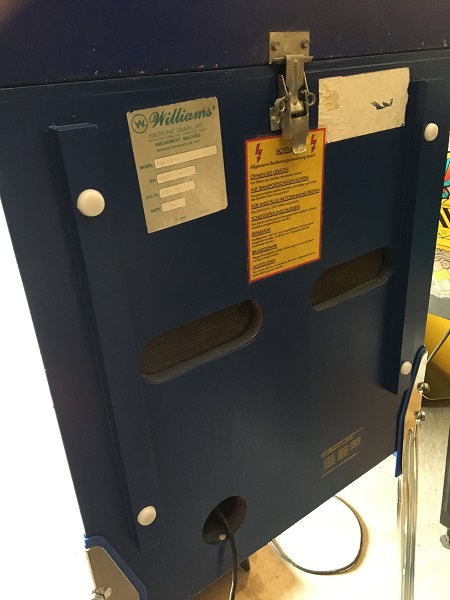 At some point in the games past, black paint had been used to touch up the front of the headbox. It looked bad, so I wanted to redo it with a nice blue for Funhouse. I removed the lock plate, and metal rails for the speaker panel and touched up with Satin black first. 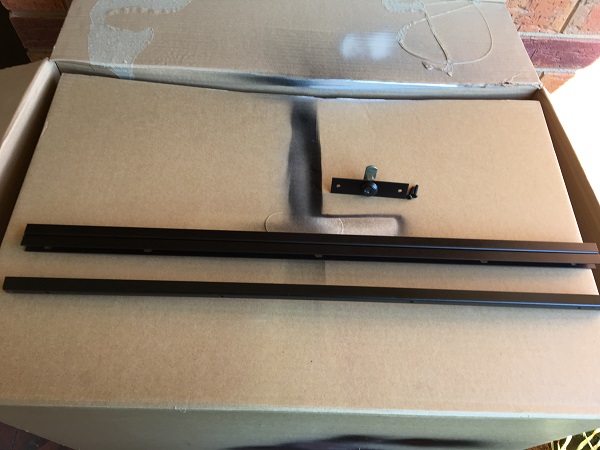 The headbox front and inside panels were repainted blue to get the machine looking more normal again. The repainted lock and speaker panel rails were installed again. 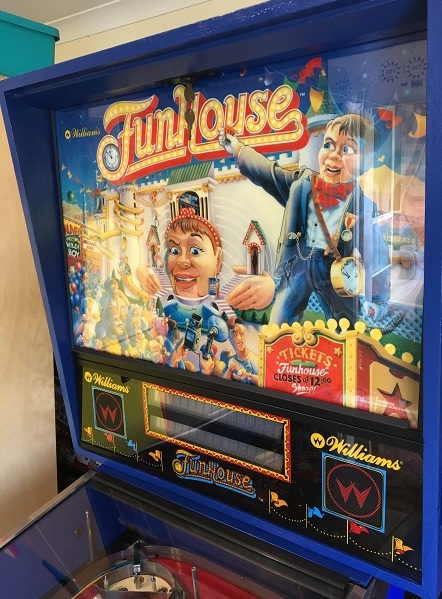 That’s it for another update on the Funhouse progress. There was a 2-3 week hold up while waiting for the replacement billboard to arrive, which delayed getting this update completed. In hindsight I should have ordered it earlier, but had left it as I was on the fence about replacing it. Maybe I should do smaller, incremental updates – but it’s always nice to have an update per section, so there’s a start and finish within the same post. I’m still hoping to get the machine completed before Xmas for the owner, I have a few days off coming up before Xmas, so it’s still a good possibility. Time will tell though. While I had been waiting for the billboard, I kept been busy by cleaning the ramps and they are ready to go back on. I still need to service the trap door assembly, but that’s the final one. Then I just need to get the ramps and rails back on to wrap up the work on it.