During my initial inspection of the machine in the first update, I had noted down a few things to look at before I attempted powering it on for the first time. This update will focus on these items. First on my list is the fuse panel. Located just inside the coin door, there is a small panel which is home to 4 fuses. My understanding is that the fuse clips on Bally EM’s are crap and a common source of problems as they often break. One of the fuse holders has already been replaced, with the new fuse holder being installed over the old one. The fuse holder on the far right (8A line fuse) is missing one of the clip arms, so this will have to be replaced.

I removed each fuse and tested it with my DMM. All were still good. I gave each set of fuse clips a pinch to test the strength in them and ensure they made a nice ‘click’ sound when the fuse was pushed back in. The clips on the replacement fuse holder were very lose and not holding the fuse firmly in place. The other two fuse clips were still strong. Two new holders were installed. 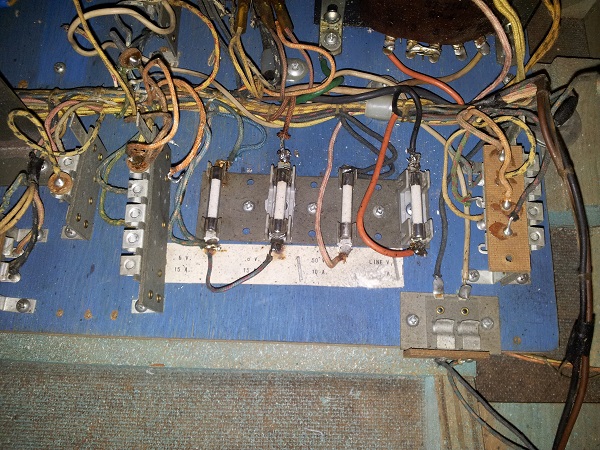 Before I power the machine on, I’ll be installing 4 new fuses. They’re an inexpensive part and allows me to say with confidence how old they are in the future. The next issue I spotted on my inspection of the machine is with the coin stepper unit. This unit controls how many players (coins) are in the game. Mariner supports 1 to 4 players. This stepper unit is known as a total reset stepper. It has two coils in charge of controlling its movement. The first will increment a single step forward. The second completely resets the unit back to the home position in a single step. 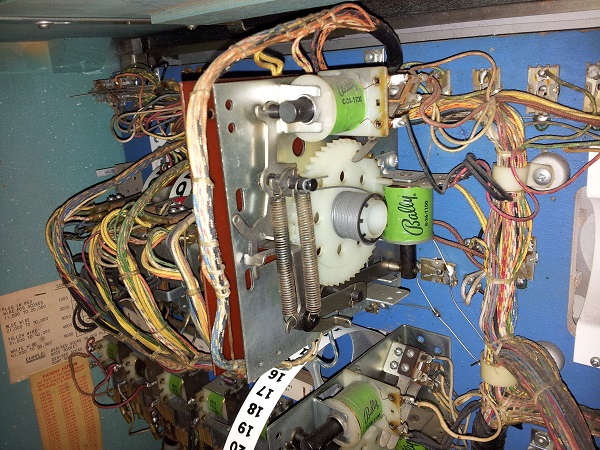 The problem I found was the reset doesn’t allow the arms that touch the traces on the bakelite plate to return back to the home position. They get stuck one step before it. 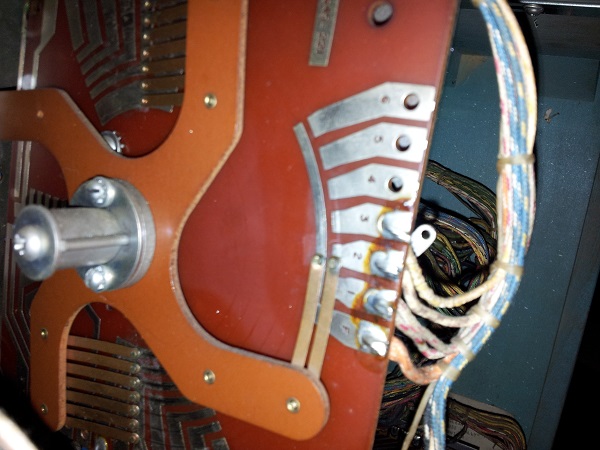 When viewing the other side of the unit, the source of the problem becomes obvious. There is a small metal arm connected to the gear. This is pushing against the 4th position switch and cannot move further back. Turns out this is a really common problem with this stepper on Bally machines. That switch should be located on the other side of the arm. 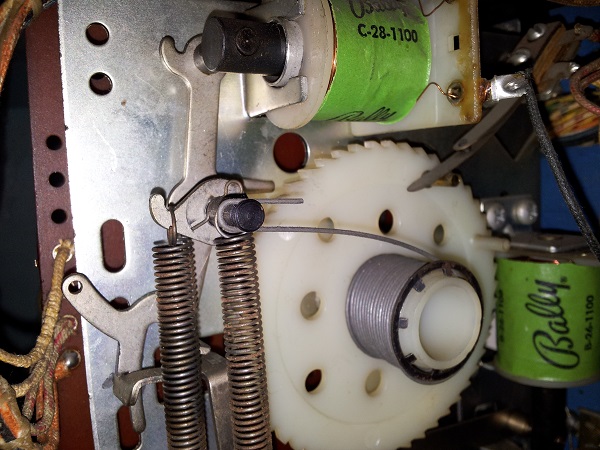 The fix is quite simple. I removed the lower screw from the switch and loosened the top screw. The switch could then rotate out. At that point I pressed the plunger on the reset coil and the small arm returned back to it’s home position. The switch was then put back into place and screws tighened.

The contacts now return to home position correctly. I haven’t cleaned or adjusted these yet. Once I have the machine operational i’ll evaluate what further attention it requires. 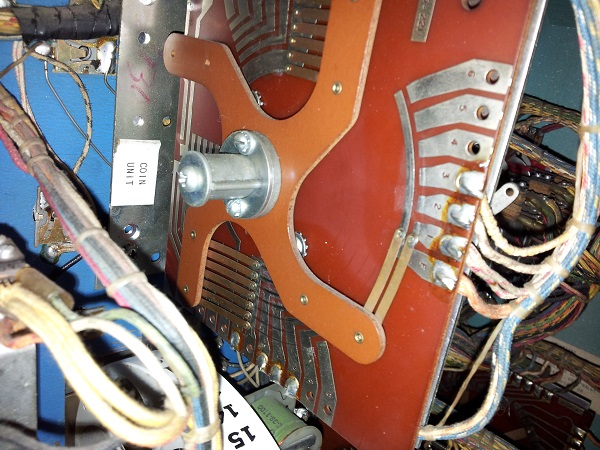 To test, I then advanced the unit to 4th position and it correctly opened the 4th position switch as it should. 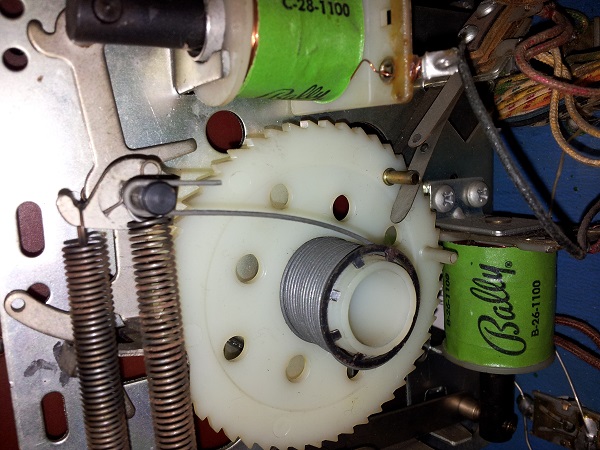 This next thing isn’t an issue, but a small “mod” to set the game to free play. This is the credit unit and is another stepper unit inside the machine. This one is a step up/step down unit and will advance in 1 step up or down, depending on the coil triggered.

There are two switches on the unit. The top switch is always closed until the credit counter hits 25 (the maximum credit count supported). Once the game has 25 credits, the switch will open and prevent further credits being added. The lower switch is open at the home position. Once 1 (or more) credits exist on the machine, this switch will close. To set the game to free play, the lower switch needs to be adjusted so it’s always closed, even in the home position. This will still allow players to earn and use credits during the game and will remove any need to open the coin door and fiddle with switches to add a credit. On some Bally EM games that have the credit light on the apron, there is a second switch here too that controls it’s state. Mariner does not have the credit lamp. 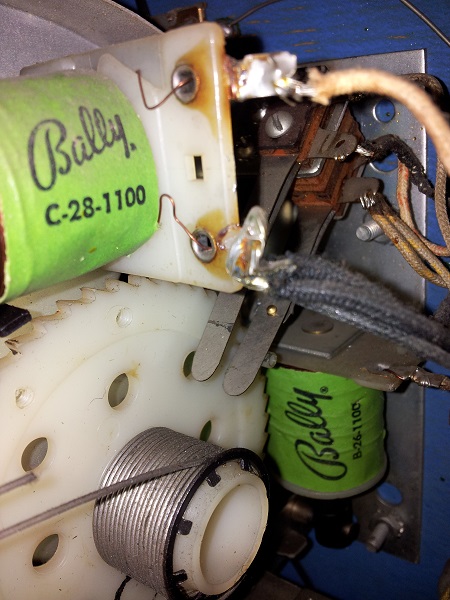 While I was looking over the assemblies under the playfield, I noticed a wire that was hanging loose on the return gate assembly. The solder on the blade lug had cracked and it had come away. 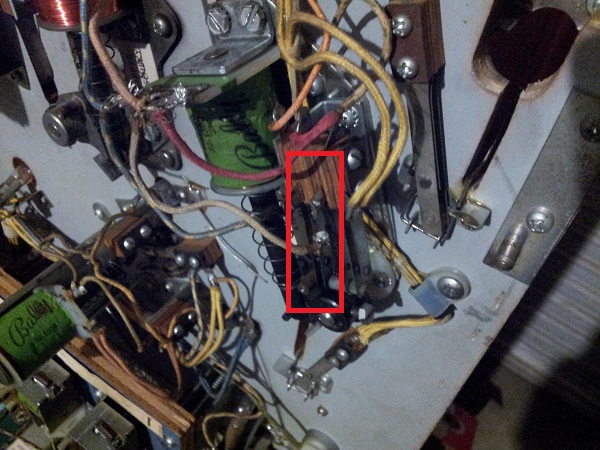 This was easy issue to fix. The wire was soldered back into place. Next item to address on my to do list was replace the power cable. Coming from Germany, the connector was obviously a problem and would need to be reaplced. I’m unsure how old the cable is too, so the best option is to replace it all with a brand new one. I like to use the piggyback extension lead style so I can have something else plugged in behind it. 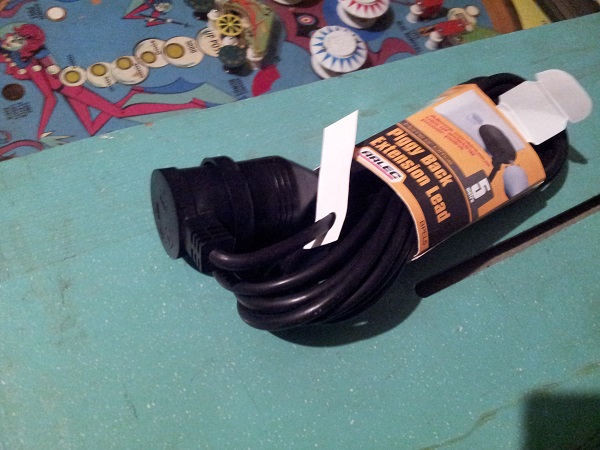 With the new cable installed, I looked over the service instructions inside the cabinet. This allowed me to check the wiring on the transformer to ensure it set up correctly and also to get an idea of what to expect from the game when it’s in play (bonus points or credits on high score, number of balls, knocker connected, etc). I cleaned each of the male settings jones plugs with a wire brush and also gently squeezed each female clip to ensure a firm connection. 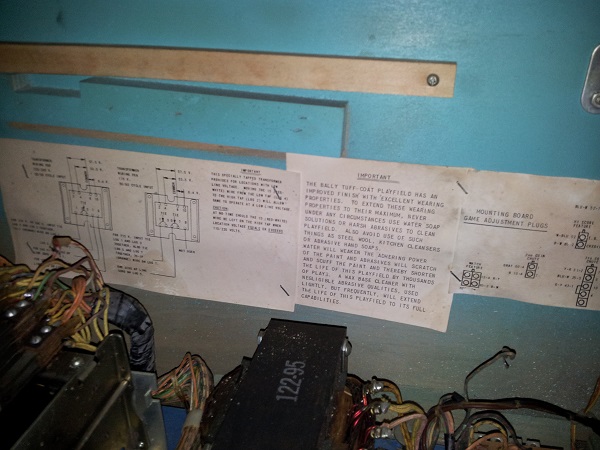 Happy with the settings and transformer, I then went to the backbox and ensured the coin and player up steppers were reset. I also advanced the ball count stepper in the cabinet to game over. I plugged the machine in and powered it up.

Nothing. I checked the switch at the base of the cabinet and that was on. But it appeared no power was going to the machine. These early Bally machines have a ‘trick’ for turning them on. The left flipper has two switches connected to it. The first is the flipper switch and the second switch turns it on the lock relay.

I pressed the left flipper button in and behold – power! (well, except for the headbox lamps). 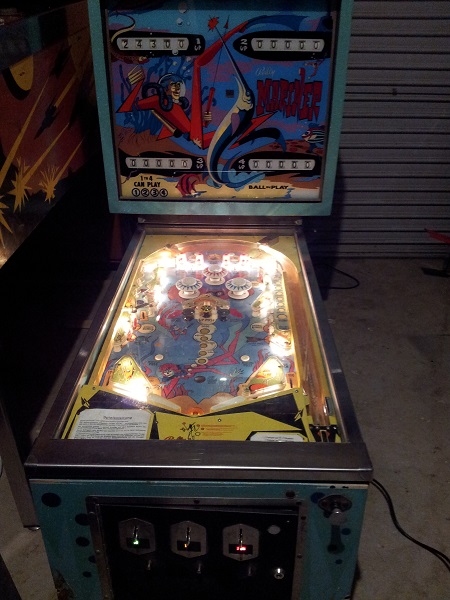 Why no headbox lamps? I switched the machine off and examined the 3 jones plugs that run from the cabinet to the headbox. I gave each one a clean with a wire brush and also squeezed each of the female connectors to ensure solid connection. With the plugs back firmly in place, I powered the machine on again and pressed the flipper button – the headbox now had light. 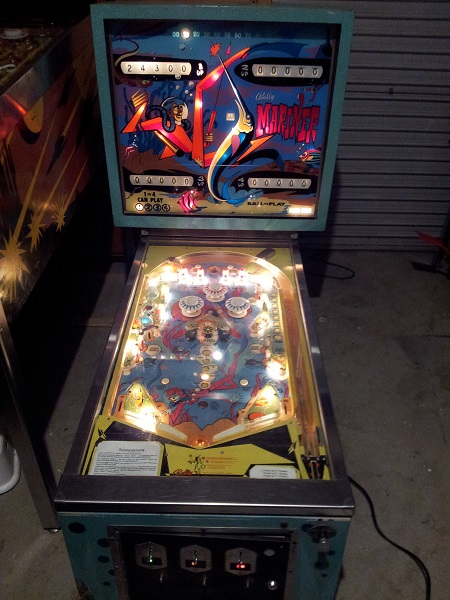 Before starting a game, I wanted to adjust the scores for all 4 players to numbers other than 0. This will allow me to test the reset sequence and spot any reels that are not resetting correctly. I manually set scores onto player 1 and then advanced the player stepper unit.

The process was repeated for the remaining players. All four players now had scores. Although I set the game to free play, I advanced the credit stepper to 1 so I could see that it decrements correctly when a game is started. I was now ready to try and start a game. 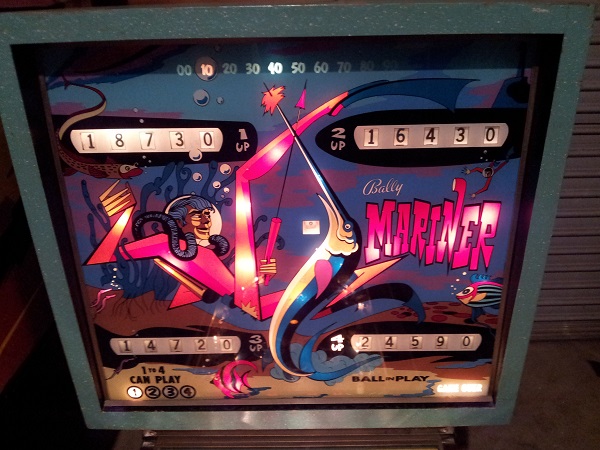 Would it reset correctly? The start button was pressed, the score reels began to tick over until each hit 0. Once all 4 player scores were on 0, the ball was ejected into the shooter lane. Ball 1 was now lit. The bonus stepper was reset. The credit counter had decreased to 0. The reset sequence was successful!

I manually rolled the ball around the playfield hitting targets. Some of the switches will need some adjustment or a clean. But the score ticked over. The bonus stepper advanced correctly and the bonus was awarded on the ball drain. The ball count advanced to 2 as well. 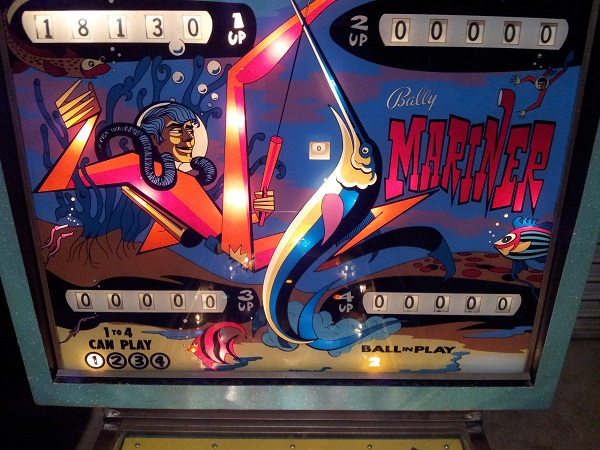 I tested the extra ball feature and also the gate – both worked. I allowed the ball to drain to complete the game.

I’m pretty happy with that! It’s basically fully working. It needs a clean and I will be working my way through the playfield assemblies servicing them. But most importantly, the game is working 🙂 I did notice that the carry switch for the 1000’s on player 2, 3 and 4 were all inconsistent. So my next task will be to clean / adjust them so the 10,000 score reel advances 100% of the time. I will also test the score reels carry on the 10’s and 100’s in game too. I will also begin to work my way through the assemblies on the playfield. Still awhile to go before I’m done with this machine – but it’s a great start.