It’s been awhile since my last crap box purchase. I actually wasn’t keen on buying any more as I have built up a large amount of spare second hand parts that have come in handy for my pinball projects. This one however had a few very specific parts I wanted, so I couldn’t resist. At the cost of $12.50AUD, it was hard to go wrong. First up, the largest part here, was a coin door. It’s not in the best condition, but the coin entry and return face plates are in good condition and match those found on my Pinbot machine. This could be useful for parts in the future. 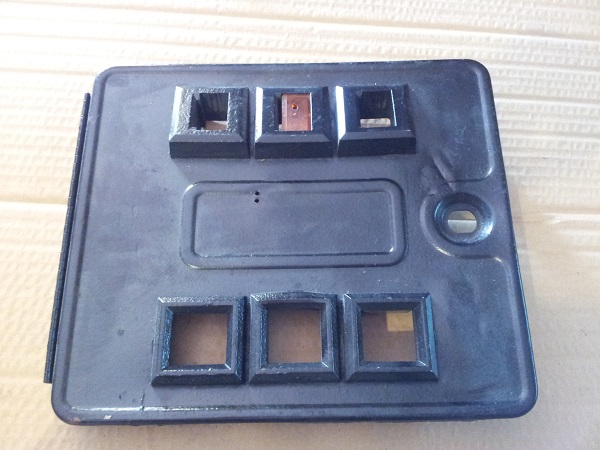 The parts I was after in this lot were a series of EM (electro mechanical) pinball parts. There were two stepper units and Gottlieb decagon score reel assembly and also a small stepper unit (with jones plugs). None of these parts are in a condition to just plug into a machine, but they have heaps of good spare parts on them – some of which wear over time and are not easy to replace. These are the only parts I really wanted and made the price worth it.

These crap boxes usually contain quite a few star posts and pop bumper caps. This time there are less than usual. The pop bumper caps are unbroken (usually one or both screw holes are snapped in places). A green flasher dome and a red lane guard were also found. Quite a few of the small spacers (black posts) were included. These come in handy for PCB mounting and also return lane pieces. There were two small nylon spacers in this lot too. I’ve got a large collection of all these now, so I’m not too worried by their lacking numbers here. 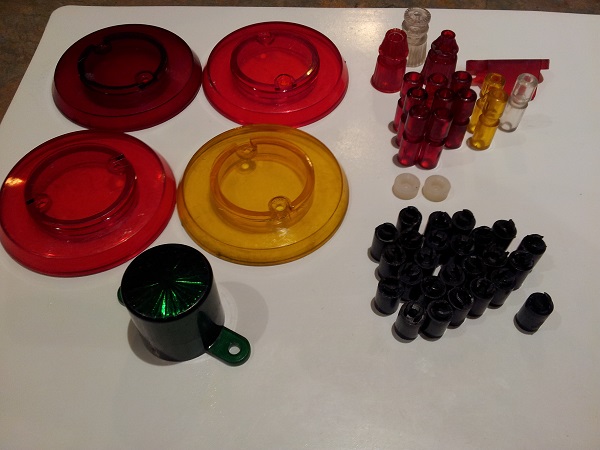 Another broken score reel assembly was included. Like the others, it’s in no state to go straight into a machine. But it will be handy for small part replacement. There were a few small PCB’s and a handful of foreign coin mechs. I’ve got plenty of foreign coin mechs now, so these aren’t really needed. On my to do list though is to convert them to using either tokens or Aussie coins. 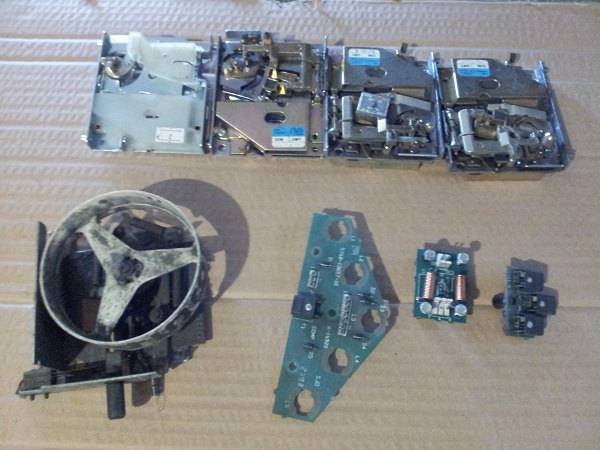 A couple of complete assemblies. The most interesting is the larger one which is a single drop target with two coils. The smaller coil matches those on my Counterforce (which allows the game to force a drop target down). The knocker isn’t in the best shape, but the coil is good. 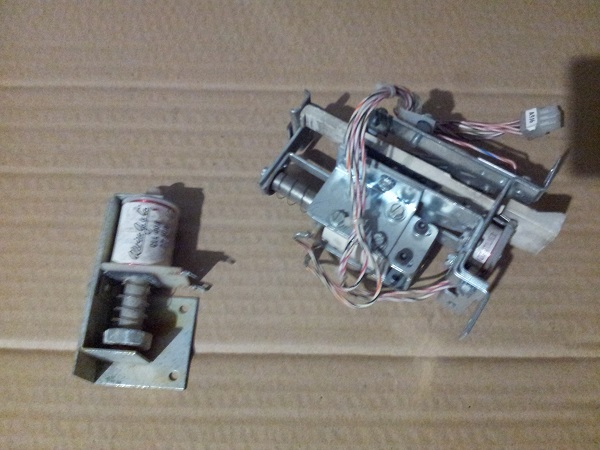 Balls always turn up in the crap boxes – I don’t like keeping them though as they are often pitted which means they are going to be like sand paper across the playfield. There was an odd pearl coloured one on the end though. I’ll see if that cleans up OK as I don’t have any of those. A few misc metal pieces and the blue base from the Addams family machine.

Some ball serve assembly parts turned up. First was a base plate and switch. I have a few of these now, but won’t hurt to add another as they are all slightly different. The two ball serve assemblies are worth keeping two. The larger one looks like a Gottlieb one and matches the one seen on my Counterforce. I may take the apron off and see if there are any parts I can upgrade. A few metal ball guides were also found. 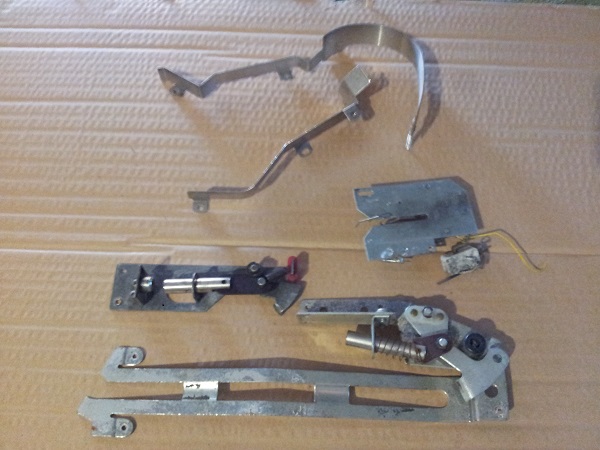 A few coils turned up in the crap box. Two of them still have their coil stop frames. These coils are all still alive and reusable. I was able to replace a few coils in my Counterforce project with some that came from these crap boxes – so they are handy to keep aside. 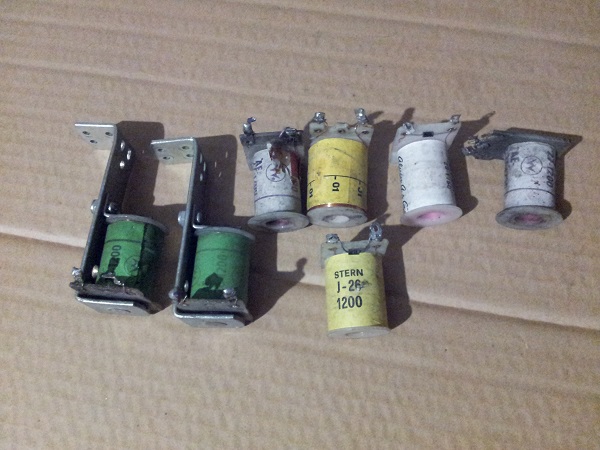 A few bulbs showed up in this lot, along with a green condom cover. I checked the state of each one and threw out any that were dead or looking in poor shape. I don’t use a lot of #44’s, but it’s handy to keep some around.

A few return lane metal pieces, gates and spinner. A random drop target and old flipper. A pop bumper ring which is nor broken (will clean up nicely in the tumbler. A few wire clips, lock parts, lamp sockets and an older style plunger – which is in good condition (needs a clean and new spring). This plunger will certainly come in handy and may be able to replace the slightly short one on my Counterforce. 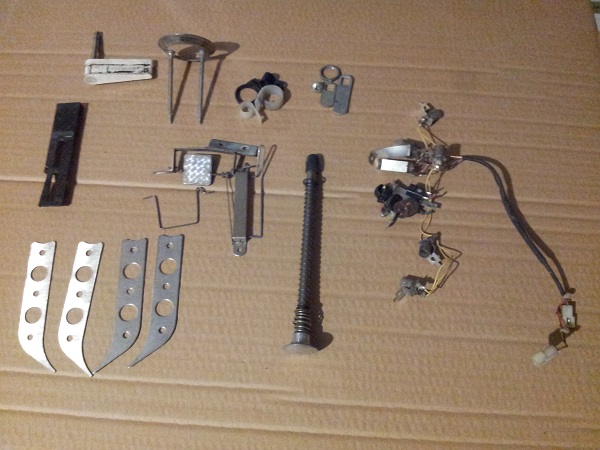 More random metal parts. Nothing exciting here. All are unbroken though, so I’m keen to keep them in case others come looking for specific parts. 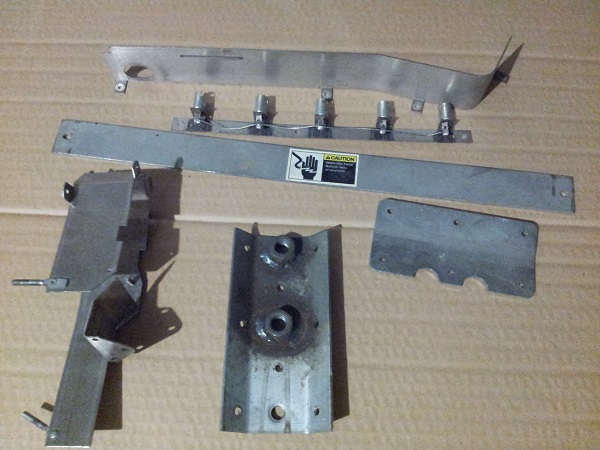 Some misc parts. A few old sling shot arms and plates. Various switches – some for sling shots, others for pop bumpers and also a microswitch with arm. A few coil stops there, but i’ll throw those out as they are all mushroomed. A plunger, which shows up on Marcospec as costing $24 to replace – this one is in great condition so it a nice find in the junk. 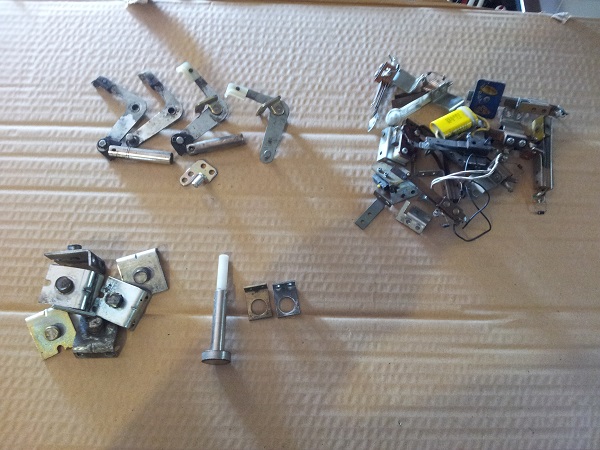 A few old grommets. A band new post rubber and coil sleeve. New parts like these turn up in the boxes from time to time. Different plungers and links. Some will be kept, while others that are mushrooming will be tossed. A pop bumper body base that will clean up ok and some electrical connectors. 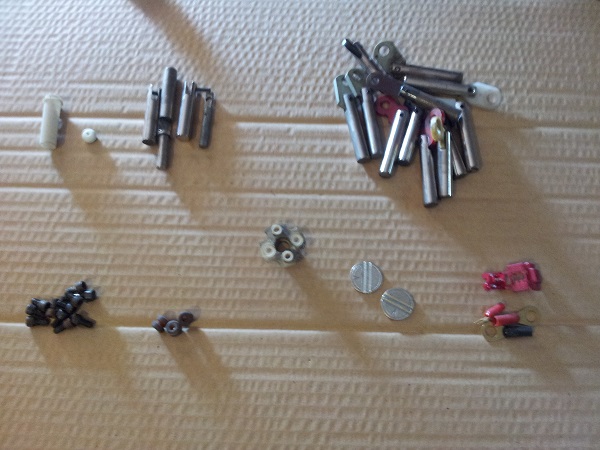 A few plastics turned up in this lot. They need a really good clean. The fighter jet piece is broken at the back. Lots of flipper plungers and links. I’ll be tossing most of these out. Some i’ll break down to keep as spare parts though. 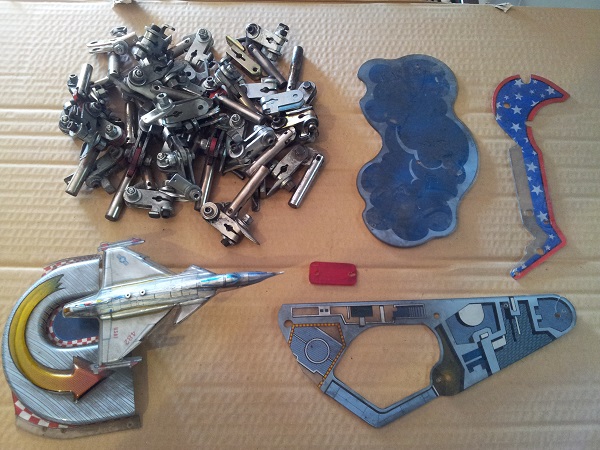 A variety of metal posts and metal spacers. These will clean up nicely and actually carry a bit of value when you need to buy them. Well worth keeping! 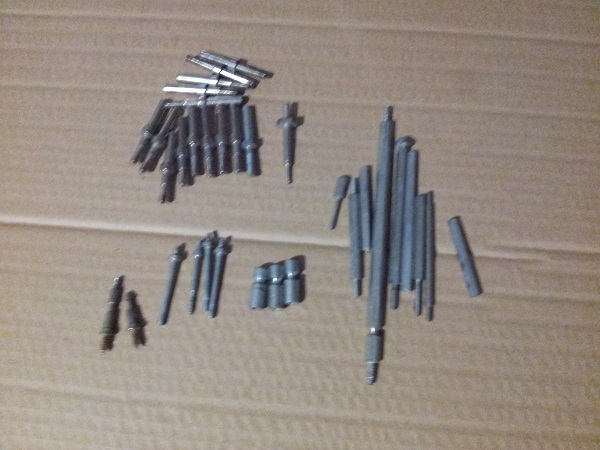 Something I always like finding in these boxes are a variety of screws, nuts, bolts and washes. They come in handy on different projects and are the sort of parts that are handy to have laying around. Two eject shields were also found and will clean up well in the tumbler. A few springs and leg bolts too. I’ve got heaps of leg bolts now. I clean them in the tumbler and keep the best ones. Interestingly, one of the leg bolts is brand new.

After going through all the parts, I was left with the junk I didn’t want. This includes broken pieces, worn plungers, old rubbers, broken bulbs, cracked / broken plastics and various other things that I (or anyone) would have a use for. I threw most of the balls out too. Even if they clean up in the tumbler, the pitting on them will still damage the playfield. It’s not worth the risk when a new ball is around $3. 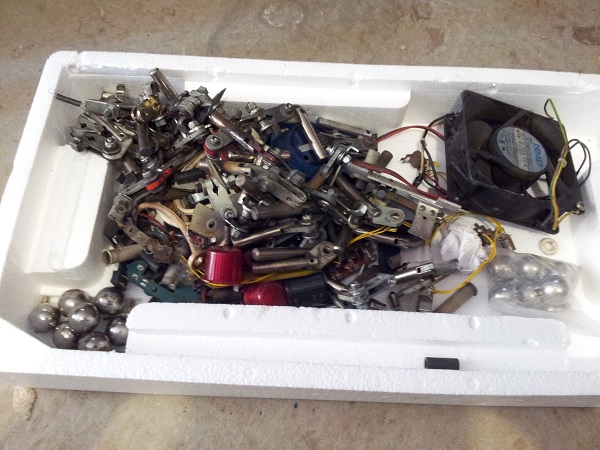 That’s another crap box rummaged through and parts stored away. The EM parts were all I really wanted from it, but I came across a few other nice to have items too. At $12.50AUD, it was well worth it for the spare EM parts alone. I’ve managed to build up a wide range of spare parts from these crap boxes for very little outlay. Plus their content has come in handy on my recent Pinball projects and also as freebies to others in need. I had thought my last crap box write up would be my last, but who knows – if more EM parts come up in a second hand box, I may have to get another one..