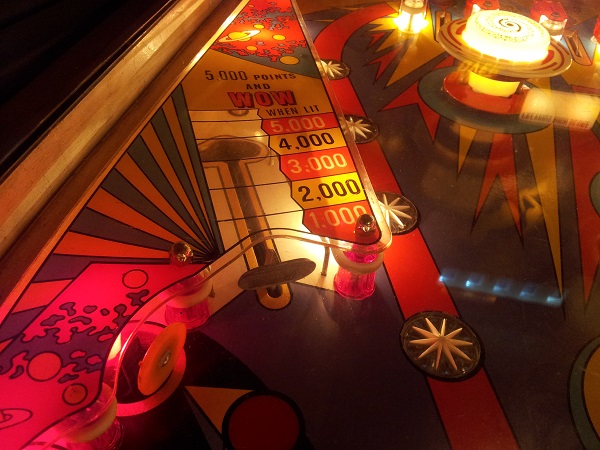 Over time, some issues have crept into the vari-target operation. The first problem is the target often does not reset correctly. This results in the score motor continually running until it finally does. There are a few variations of the issue too. In some cases the arm resets back fine without issue. In other cases it’s slow to reset. Sometimes staying in it’s final position for a few seconds before resetting. In other cases it resets about 60 or 70% of the way and then the remainder very slowly (or in steps).

The idea is once the ball has run out of steam, the target should spring back and push the ball back out. In many of the cases above, the ball rolls back out while the target drags it’s heels in resetting. In the cases were the arm slowly resets, if you manage to score the WOW, you can end up earning 2 or 3 extra balls as the score motor is still going while the arm is in the wow range. While earning free balls are always nice, it feels somewhat cheap to earn them this way. I suspect it will need some cleaning and a few minor adjustments to get it functioning correctly again. So let’s lift the playfield and take a look at it.

In terms of an assembly, it’s really quite simple. I’d describe it as a sort of stepper unit, although only has 1 coil which is used to reset. In this case, the coil that would advance the unit is replaced with the ball. There are two switches attached to the assembly. The first switch is the home (or reset) switch. By default this is open. As the arm gets pushed back by the ball, this closes. The second switch is also normally open. This only becomes closed if you managed to get the arm all the way to the back – this activates the WOW / Special feature. There is a tension spring which is used to add resistance to the arm and also reset the arm. 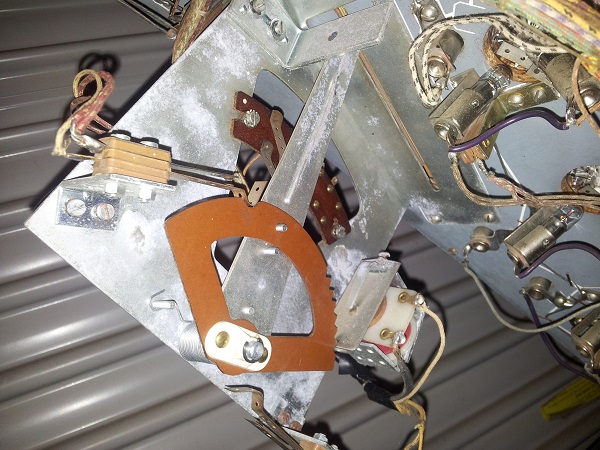 The first thing to do is clean the rivets and contact arms. These have collected some crap over time and look to be preventing smooth movement of the contact arms over the rivets. The bakelite plate with the rivets can be removed for better access with two screws undone. 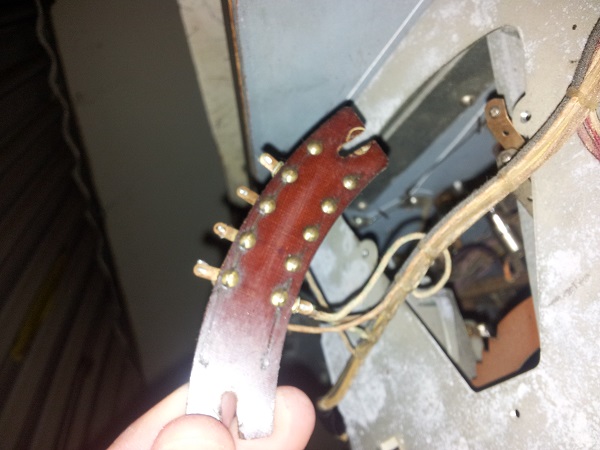 I first wiped the area down with an alcohol swab to clean away the built up crap. I then used 600 grit sandpaper across the rivets and contacts to clean them up. It was then installed back into the machine. A very think layer of teflon gel lube was then applied along the path of the rivets for the contact arms to smoothly move across. I manually moved the vari-target back to its maximum point and then manually released the arm a few times and observed the movement. The contacts smoothly moved across the bakelite plate. Much better then before. It’s not an assembly that can be properly tested while the playfield is up though as the tension spring is working against gravity. Happy with what I was seeing though.

The second thing I wanted to do was give the reset spring a little more tension. There are 3 position you can latch the spring to, allowing for small adjustments to be made. You don’t want to add too much tension as it makes the shot harder. The more tension added, the stronger your shot needs to be to push the arm back. If it’s too strong, it will be impossible to hit the higher point ranges and WOW feature. 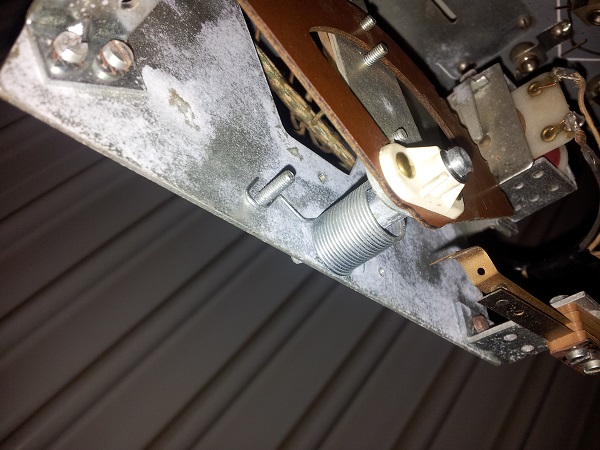 Although there are 3 spots for screws to sit for the tension, only 1 screw was in place on the assembly. I didn’t want to juggle holding the spring in it’s current spot while transferring the screw, so I looked through my parts and found a suitable screw to add to the unit. That was added to the next spot and the spring tension advanced forward one notch.

At this point I put the playfield back down, switched the machine on and started a game. I manually rolled the ball into the vari-target to see how it went. It’s movement was much better. Once the momentum of the ball was dead, the arm would push the ball back out and reset in one smooth motion. This was repeated a few times. All good. But, there was still a problem to address. In many (not all) cases, even after the arm had reset, the score motor would continue spinning another few turns. It would vary, sometimes 3 clicks, sometimes 5 or 6. In the good cases it would finish spinning just after the arm reset all the way. So still some work to do. 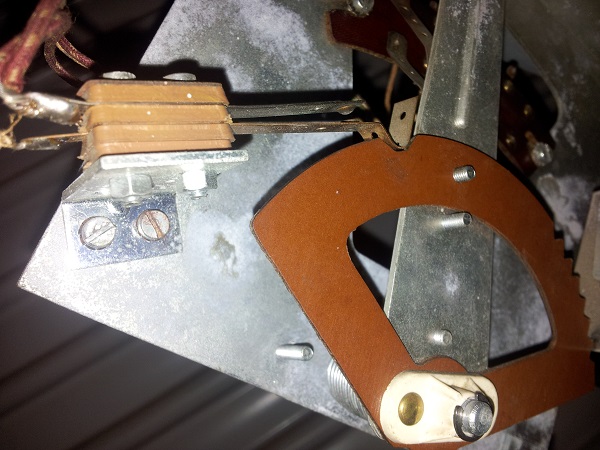 The WOW switch is open by default also. This will only close when the arm reaches all the way back. 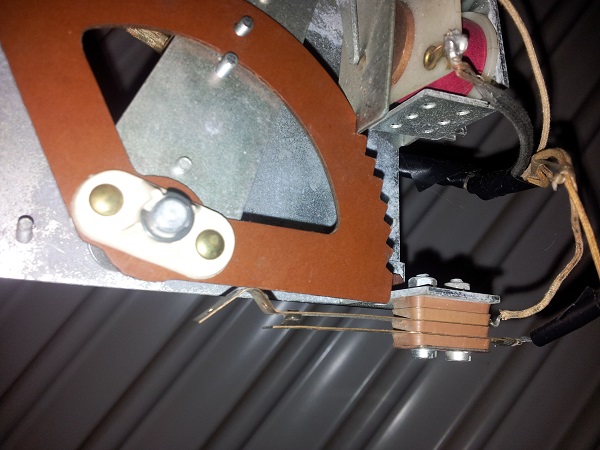 I used some flexstone and cleaned the contacts up. I didn’t think these were the problem. At least not the WOW switch. I manually moved the vari-target across the rivets and watched the switches in action. Both looked to be adjusted correctly and nice clean contact was being made at the correct times. Happy that the home switch was clean and opening / closing when it should I lowered the playfield again, started a new game and manually ran the ball into the vari-target again to test. Same issue as before. The score motor runs longer than is should. This score motor issue is only seen when the vari-target is hit, so it’s more than likely something to do with how it resets. Time to look at the schematics and see what they can tell me about the vari-target.

There are two relays that deal with the vari-target. The first is for resetting it (relay D). The second is for the scoring (relay E).

I didn’t feel the scoring relay had anything to do with it as the points are always correctly awarded and that’s taken care of before the reset relay kicks in. It isn’t awarding additional points either. In the cases where it awards more than 1 extra ball, I suspect that’s because of the WOW switch still being closed. It could be some switches on the score motor too. But first, I’ll start with relay D since it’s in charge of resetting and the most likely cause. I lifted the playfield and located relay D. 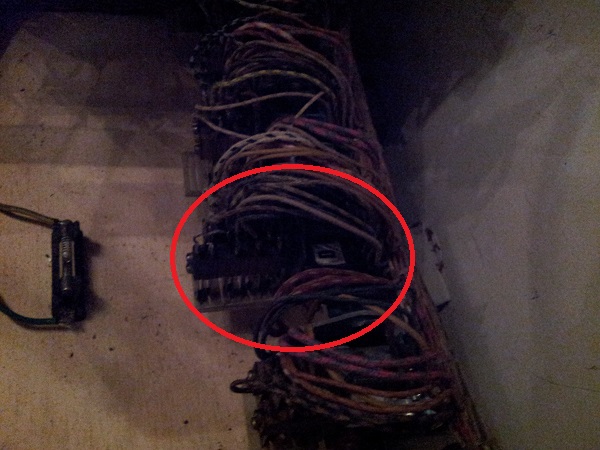 I then started a game, manually hitting the target using my finger and watched relay D. Sure enough I could see the score motor continue spinning after the target had been reset. I could also see relay D continue to pulse with each click of the score motor until finally they stopped. I repeated this several times and noticed that in most cases, just before the motor stopped, a spark could be seen from the 4th switch within the relay.

I switched the machine off, removed the clip holding the relay in place and examined the switches. Manually moving the relay I could see switches switch state. I paid close attention to the 4th switch that I saw spark. This was given a clean and a very slight adjustment to ensure good contact was being made each time the relay was pulsed. The relay was reseated, machine switched on and a new game started. I repeated my test of manually triggering the vari-target. This time, the score motor stopped just after the arm reset. This was repeated a few times, each successful. I then lowered the playfield and manually ran the ball into the vari-target. Each time, the arm reset in 1 smooth motion and the score motor stopped correctly once the arm reset. I repeated this for a few minutes testing the vari-target at various distances of return with 100% success. So that one switch, required just a small adjustment to fix the problem.

I have more issues to cover, which i’ll go into with future updates.