The progress is going really well right now on Counterforce and these updates are coming faster than I had expected. My plan was to focus on one set of the flippers for this update, but that got pushed back so I could complete a few other things off first. In recent updates I’ve had my attention at a few sections around the playfield with sling shots and targets. This update will focus on the remaining targets and also the bonus saucer. Next update will be the flippers 🙂 The first part of the update will look at the small target and switch located above the left (upper) flipper. The plastic here is broken in two points. 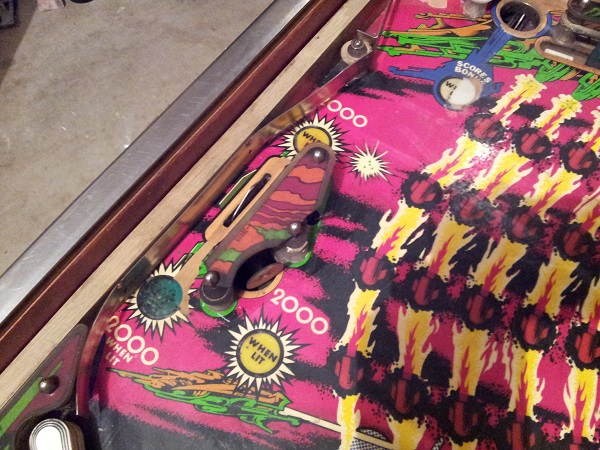 With the plastic removed, there’s a similar story to the rest of the machine – it needs a solid clean. The small leaf switch just up from the target is also bent and I hope to straighten it out. I’m sure I can find an adequate spare in my parts box if not. There is a bit of playfield wear on the lane behind the target, but not much I can do about it other than clean up and protect against further damage. 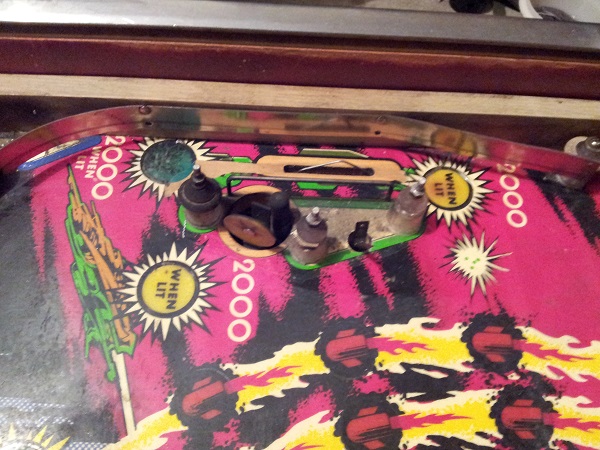 While removing the target for cleaning (and the switch to straighten it up), I noticed that the yellow insert lamp was missing a wire. It’s there, but has come off. Easy enough to fix and reattach. Good to find this now though while I’m in the area. 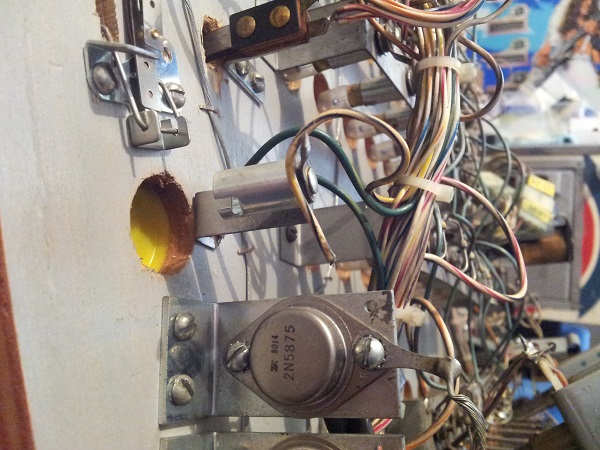 The target was cleaned up and the switch too. One of the decals I made was also added to the target. The playfield was cleaned up with eucalyptus oil, followed by novus 2 and 1. All dirt was removed. The metal wire frame was rubbed down with a magic eraser to clean the crap off it. The star posts were installed again, along with new rubbers and a new lamp. The metal posts were all cleaned in the tumbler too. 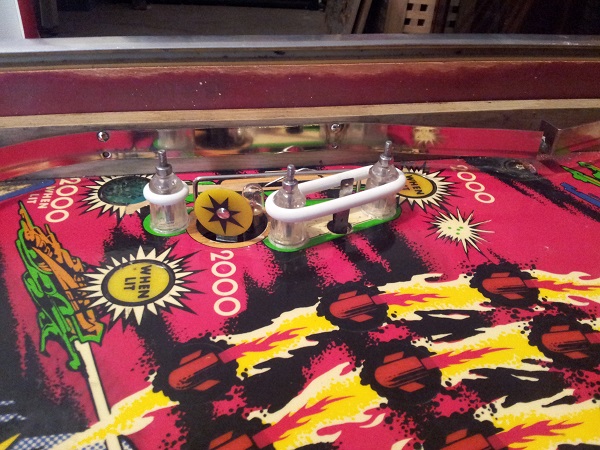 Finally, the cleaned plastic was added again. I also added some clear lexan washers below the plastic to protect against further damage. There is enough of the plastic left for the metal caps to hold it firmly in place, so it won’t move.

Jumping across to the right side of the playfield, there is a similar set up just up from the slingshot & target I looked at in my previous update. 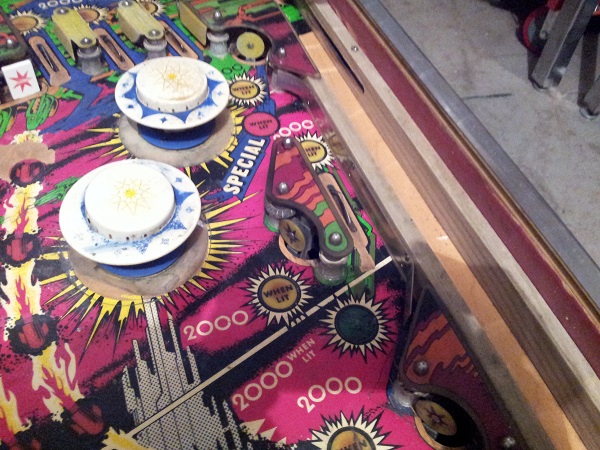 The plastic was removed for cleaning and the rest should clean up nicely too. This one is in a very similar condition to the last. There is no leaf switch on this one though. The lane behind the target has some wear, which I’ll add a mylar patch over over once done. 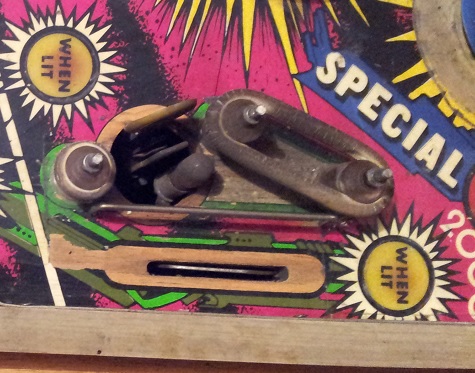 No real issues on this side. The target was removed for cleaning and a decal added. I use a regular hole punch to cut out the stud hole in the decal before installing it. It fits perfectly around the stud. New rubbers installed, along with a new globe. I also cleaned each of the switches with some card to remove dirt and make sure the contacts make a clean connection. 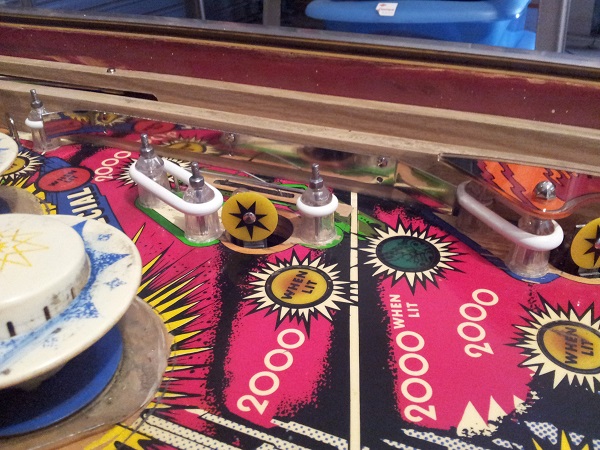 Finally the plastic was added again, along with the post caps. The playfield area has been cleaned down too and feels nice. The clean areas of the playfield are now starting to outnumber the dirty – which makes the dirty areas stand out more. I love seeing these bit come together as a little effort makes a world of difference to their appearance and ensures dirt and crap isn’t pushed around the playfield during a game. Given the same plastic on the opposite side was broken, I’ve also added clear lexan washers below this plastic too for added protection. 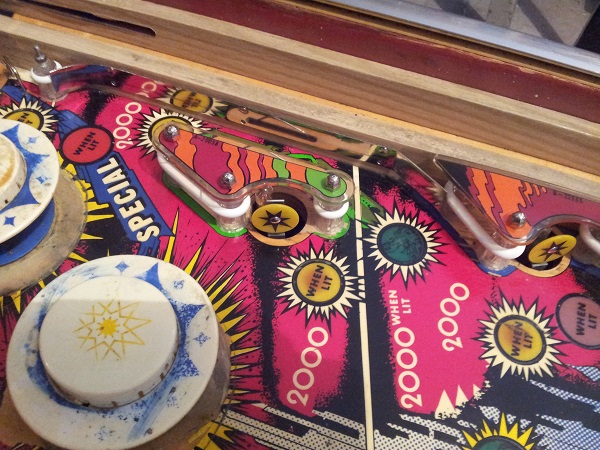 Last part for this update is the saucer, located just to the left of the long drop target bank. One part of the saucer base plastic is broken. The metal ring also has some built up crap on it, which will need to be removed. 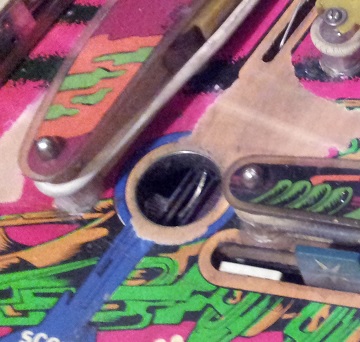 Under the playfield, most of the assembly is covered in black crap. The assembly is a typical saucer though. Trying to use it manually with my finger, I noticed it would get stuck. Hopefully this won’t be a problem post cleaning. 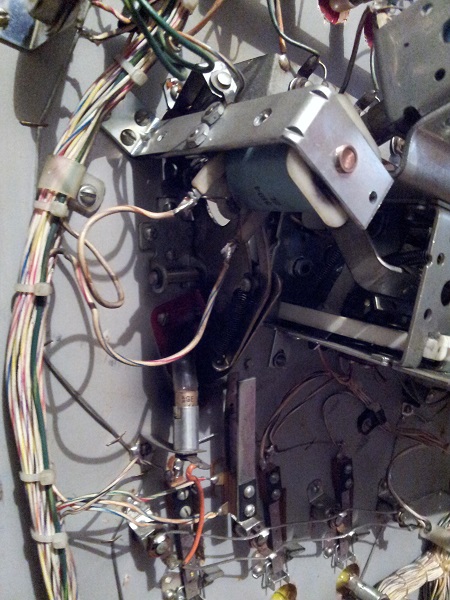 I removed the globe first to get better access to the screws. From there the coil frame was removed, followed by the arm. That left the plastic base of the saucer. The switch here will also be removed for cleaning too. 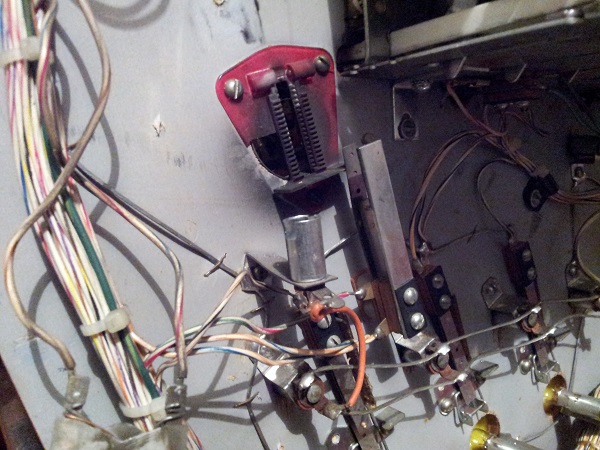 All the assembly parts were laid out for cleaning. A metal coil sleeve probably means this hasn’t been looked at in forever. Time to clean it all up. 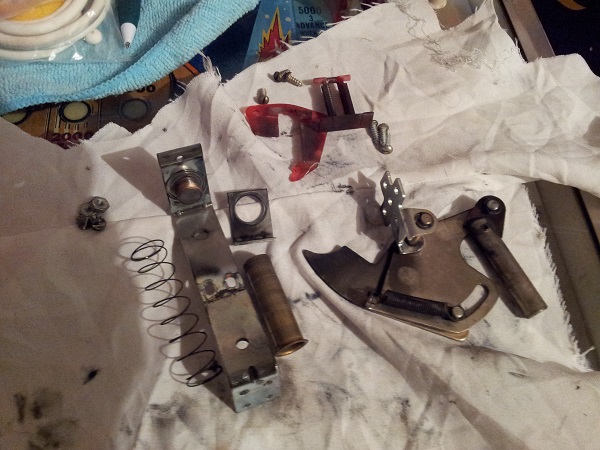 Eucalyptus oil, cloth and steel wool worked well to remove the crap each part was covered in. I’ll be replacing both plastic pieces of the saucer base and also installing a new nylon coil sleeve. 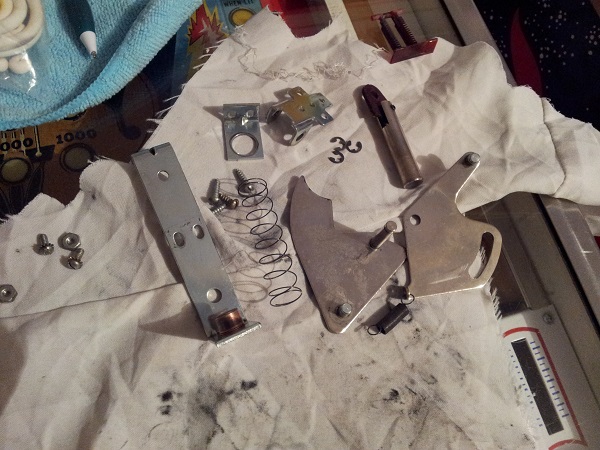 I added the new saucer base parts. While doing this I noticed a very dirty insert located around the assembly for the saucer. This one wins dirtiest insert for on the machine

A gentle wipe down and it’s White again. 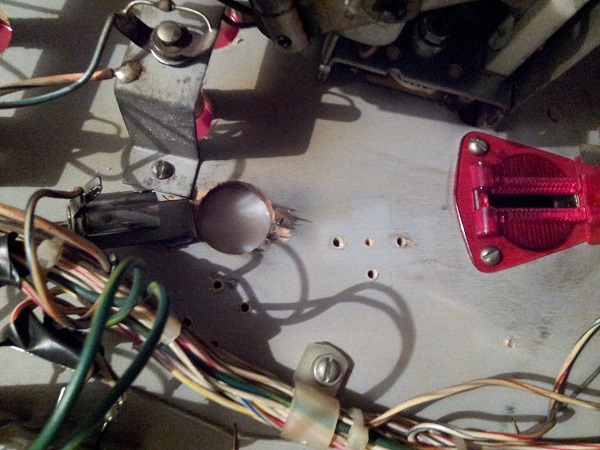 All the parts were assembled back together and installed into the machine. The saucer was tested and works perfectly. It looks much nicer too. 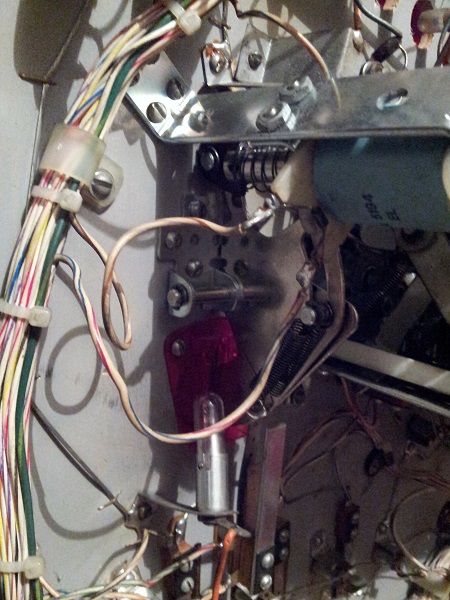 That’s it for another update. I’m currently working my way through the upper set of flippers. I’ll look at cleaning all the bonus inserts in the area too and given each one a new bulb. I want to get back into the backbox to clean up the the cpu and driver board edge fingers to ensure good contact is being made with the connectors. I also want to test the transistors to see if any are dead or on their way out. Stay tuned.