This time I’ve got a serious pile of second hand pinball parts to sort through. Some 40kgs+ of assorted bits and pieces from various machines and manufacturers. This is actually two lots joined together truth be told. I purchased both at the same time and when I collected them, they were all tipped into the same box to bring home. So instead of somehow splitting them up and doing two write ups, I’ve decided to just do single post covering everything. There really is a lot of stuff here to get through. The total cost for the box was around $35AU, which isn’t too bad considering the bulk of it all. There were some items I was specifically after but most of the content is a mystery. I can’t wait to see what’s actually in here 🙂 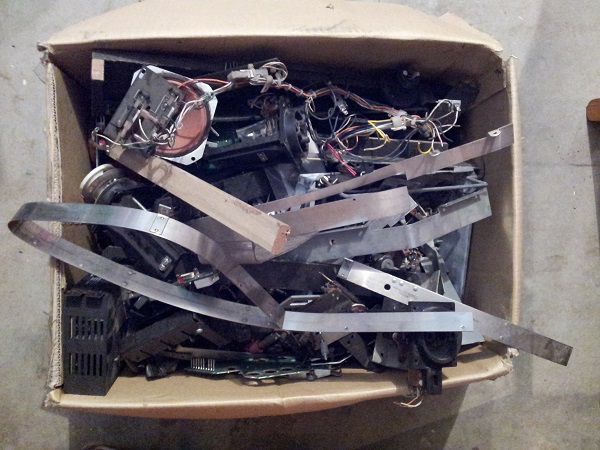 First out of the box was one of the main items I wanted – a wiring loom. It’s smaller and less complete than the one in my previous post, but I’m really happy to add another one to my spare parts collection. Ideally, I’d like to get another couple to have a good range in wire codes (one from an EM machine would be awesome as well). This loom is OK though and certainly worth holding on to. 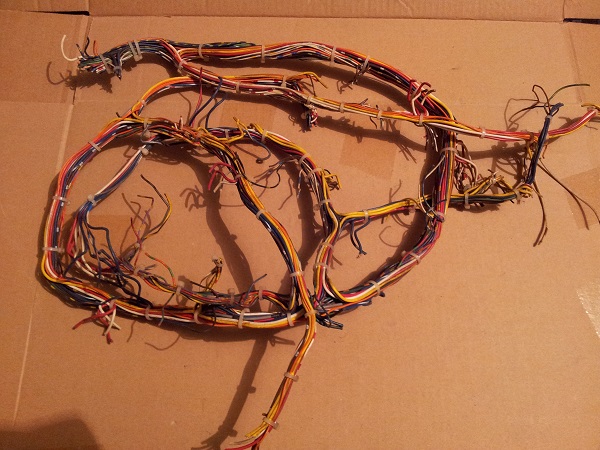 Oh no, more buttons. I’ve got so many spare buttons now that I’ll have to toss some of these. There is an older Stern style button housing (and transparent red button) which i’ll clean up and keep. I’ll select a few of the better buttons to also clean up and keep, while the rest will be tossed out. It’s a shame to throw parts out, but I will at least salvage the e clips and springs.

A small selection of flippers turned up in this lot. I’m going to keep the Gottlieb flipper and mini yellow flipper as I don’t have any put aside. The two bolts are actually in excellent condition, so i’ll keep those. Of the 8 fuses, only 3 still work, so those will be kept while the others tossed out. More cable clips! These will be kept for sure and I’ve got a nice collection built up now, so shouldn’t need any for awhile. 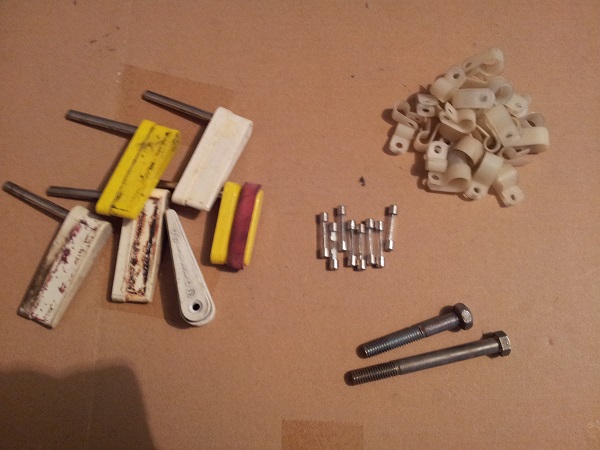 A very large pile of twist style lamp sockets (the sort that attach to lamp PCB’s). More than i’ll ever need spares of, but will keep anyway (and there are a few different sizes here). A shooter lane cover from a Data East Playboy machine and massive pile of screws, nuts and washers to add to my collection. There were actually more screws I could have kept, but I’ve collected too many from the 5 crap boxes that I can now be fussy with what I keep 🙂

Next up is a nice assortment of metal posts and switch wires. These will all go into the tumbler to clean them up nicely. Given the price of these new (and how nicely they clean up after the tumbler), this lot just about pays for half the box of parts. Not bad.

Here we have 3 pop bumper assemblies with the older style bodies and even a cap. All three are actually in reasonable condition (outside of needing a good clean). They are not broken, which is a big plus. The skirts are OK and may clean up fine. The metal rings will go into the tumbler as I’ve had some success with cleaning these up for future use. These sets are a nice find in the junk and may come in useful for a future pin project. 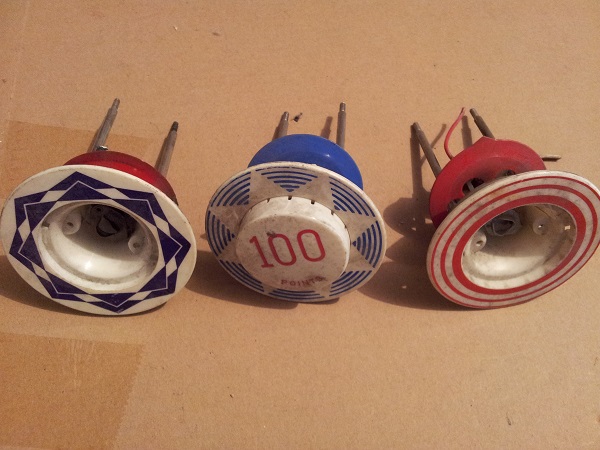 As with my previous crap boxes, some more pop bumper caps to throw on the pile. The purple style I don’t have many (if any) spares of and the blue ring is also worth adding to my spares pile. Some of the red caps will be tossed as they are mostly scratched and I’ve got plenty of red spares now. 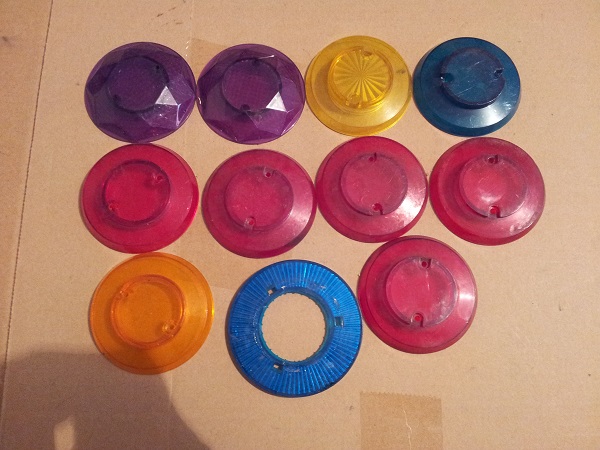 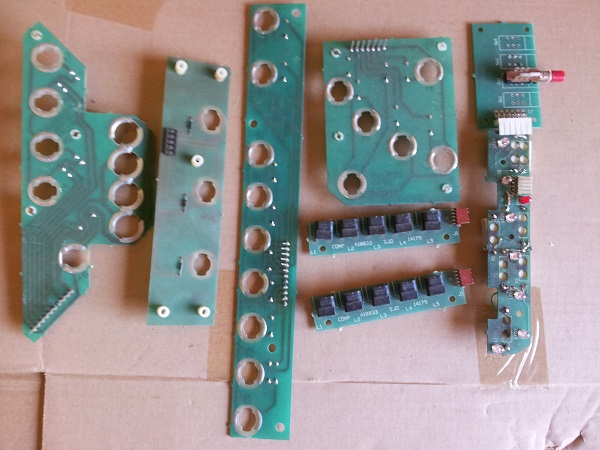 A few misc parts. Some metal ball rails which are showing signs of use, but still OK. Part of a coin return assembly. I have two of these on Pinbot, so will compare and see if it’s in better condition that those. Two locks. The locks will be tossed, but i’ll keep the metal face plate and cam. 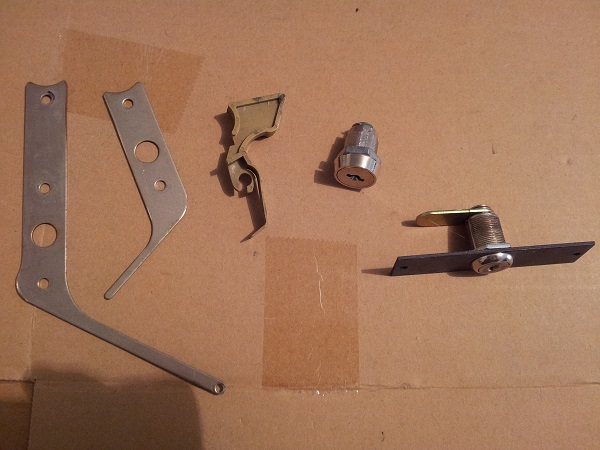 A few small wood rails showed up in the pile. These are mostly unusable, but I want to repair some damage on my Pinbot rails during the playfield swap. These might be worth hanging onto in the short term to practice patching them up and respraying. 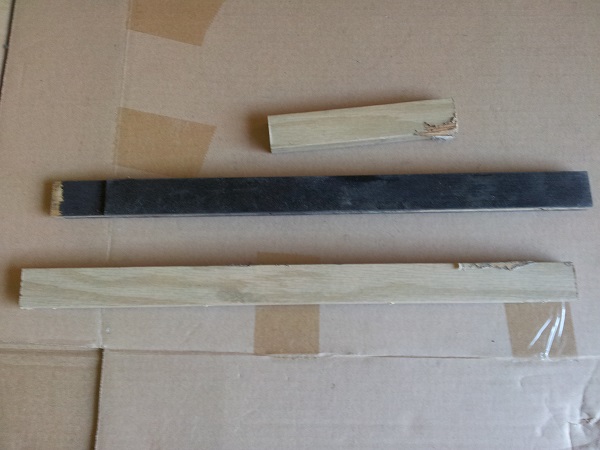 A nice big pile of switches. Some from flippers, some from pop bumpers and others from general scoring / slingshot switches. Nothing really new from the last two crap boxes, but certainly worth hanging onto for future projects. A couple of brass pop bumper spoons turned up too although they’re not worth keeping. 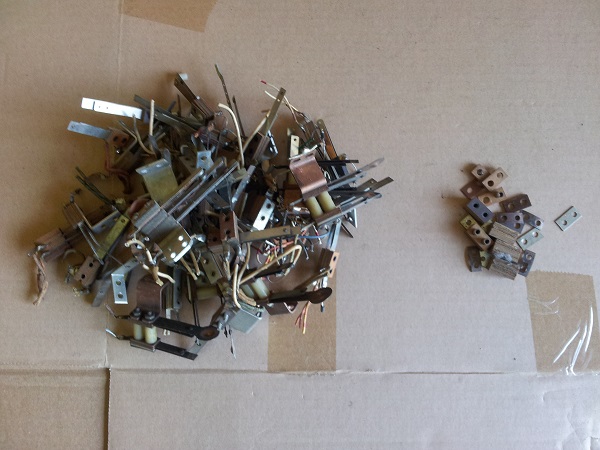 Usually this is one of the first things I cover in my crap box posts, but I let it slip down the list this time. A small assortment of star posts, lane guards, plastic posts and spacers. Most of them are in great condition, although a few of the small black posts are a bit worn on the top. One really nice part here is the small roll over on the right. These appear on my Nugent (and no doubt other machines). I’ve not seen these for sale anywhere and I’m not sure if they are being reproduced, so I’m very glad to uncover one of these in the junk 🙂 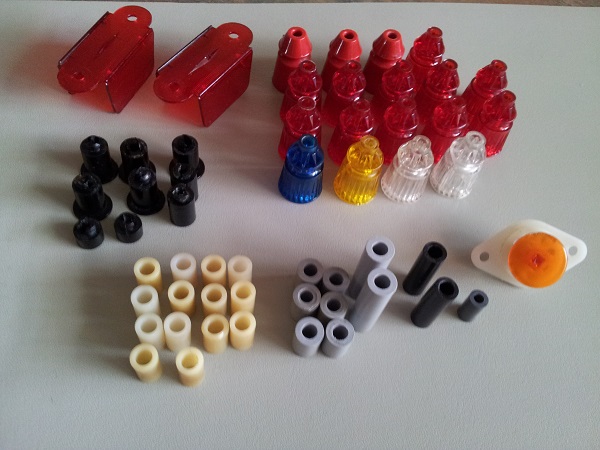 A selection of pop bumper and sling shot coil brackets. I’ve got plenty of these from previous crap boxes, so most will be tossed. I’ll keep the coil though. The bottom assembly looks like a knocker and I’ll certainly keep this. 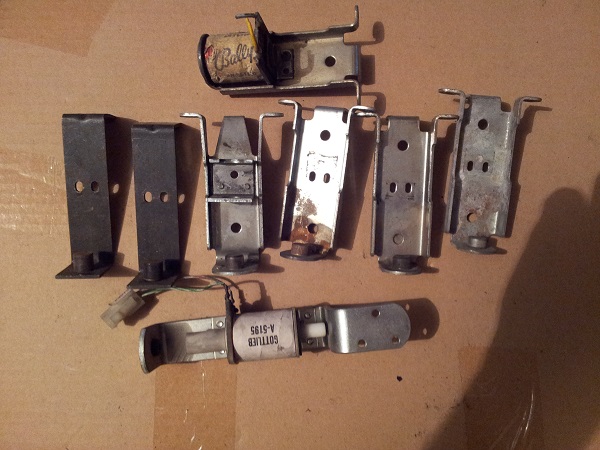 Time for some miscellaneous parts. Two Data East speakers, but both broken sadly. An older style shooter rod and assembly plate. I’ll see how the rod cleans up and I may keep it if OK. A coin counter and some headbox latches. 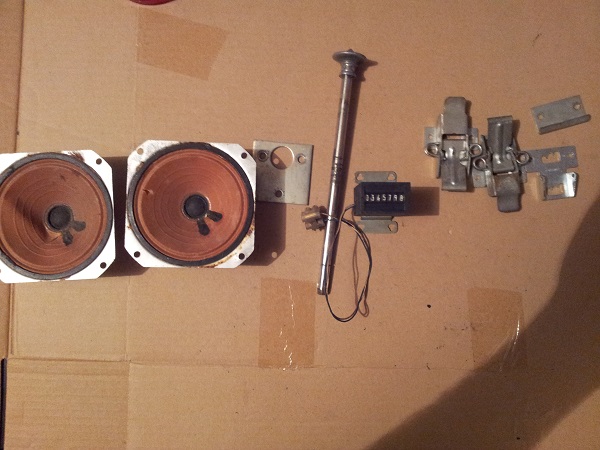 A nice collection of pop bumper and slingshot assemblies. Two of the plastic frames on these are broken, so will be tossed. But I will raid all of them for the switches, metal plates, screws, etc. Anything metal will go into the tumbler to clean up anyway. The good frames will be put aside for possible future use. 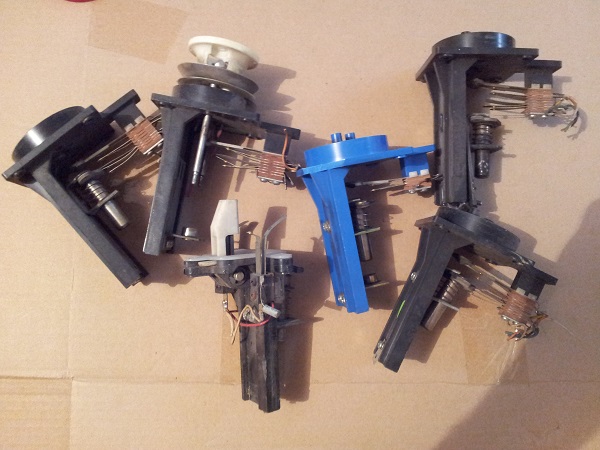 Two old power supplies. I’ve used these in each of my arcade machines. They are set to 220V, but I don’t plan on using them. I am tempted to raid them for a few small parts to fix another power supply I’ve got which had some issues. So these will be set aside for the moment until I can scavenge the parts I want. 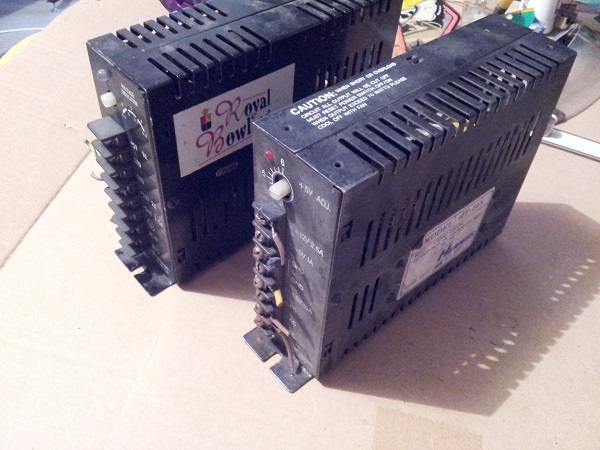 A trough plate and a small collection of microswitches. Everything here is worth keeping and I’m glad to see the remains of a wiring harness attached to the plate too which will be added to the other pinball wiring looms i’ve collected.

A collection of metal ball guides. The large piece in the middle has a few bends in it, so won’t be kept. The others are fine though. I’m in two minds about keeping these, but I have seen project machines with some of these parts missing, so I think it’s worth keeping. They don’t take up too much storage space. 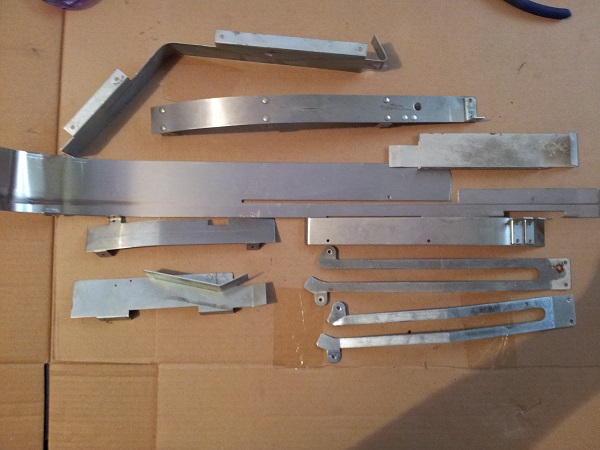 A random assortment of large metal parts. Looks like some lock bars for coin doors. Not sure if these are ever going to be useful since they are not needed in home use. 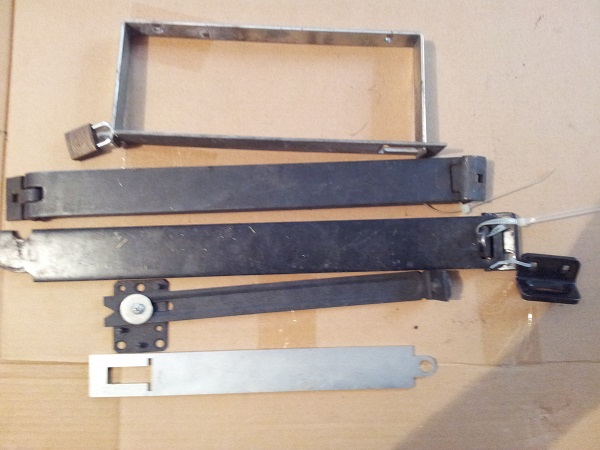 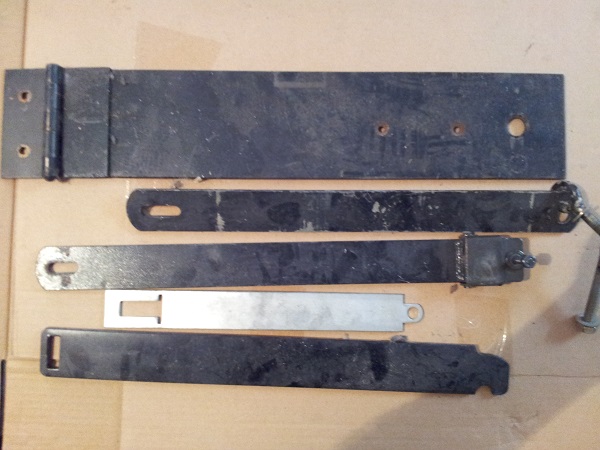 A few misc smaller metal parts now. Two inner plates for the leg bolts. Some arms that sit at the base of a playfield. These are bent, but it should be possible to work them back into a decent shape. Nothing overly useful here, but these are the sort of random parts I like to have since most don’t have direct part numbers to reference if needed. 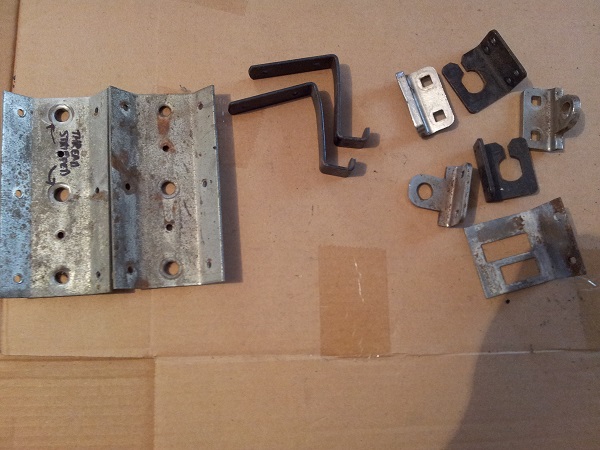 Here are some interesting metal parts. An arm to hold up a playfield and also a lock down bar receiver. It’s missing some parts and it will need a good clean. Worth holding onto in the short term. 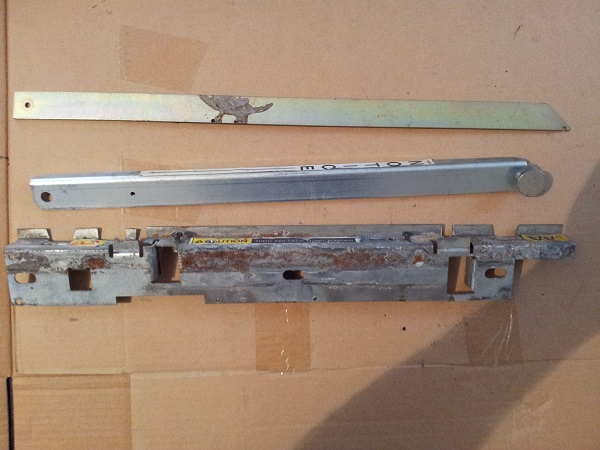 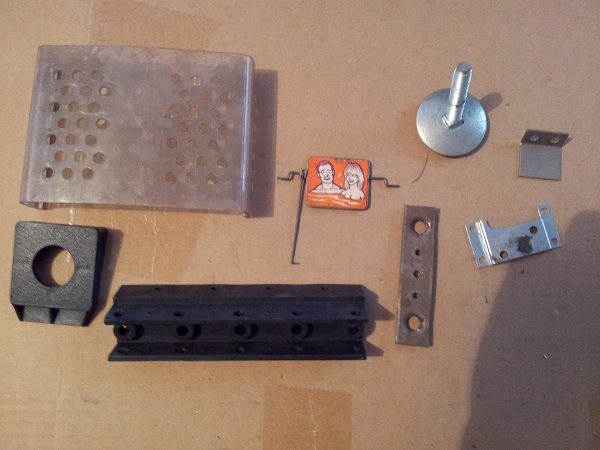 Two parts from a Data East Playboy pinball machine. The target bank is missing a few targets. The panel could do with a good clean. Not much use to me, but perhaps someone could use them in their machine. 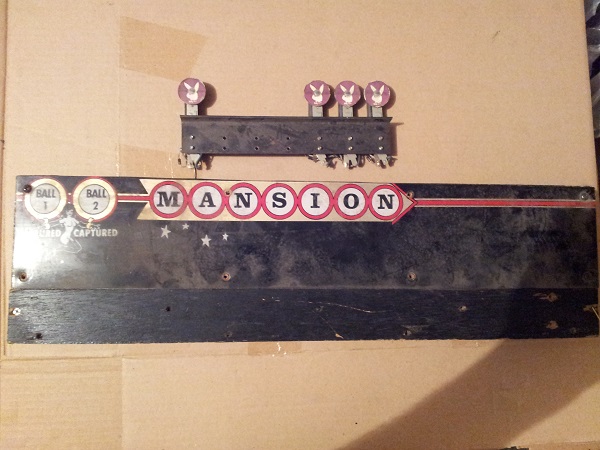 The saturated item in this parts box is lamp sockets. A very large selection of #44/#47, #555 and #89 lamp sockets. Various shapes and sizes too which may come in handy down the track. I’ll sort through these before packing them away and weed out any that are not in good condition. 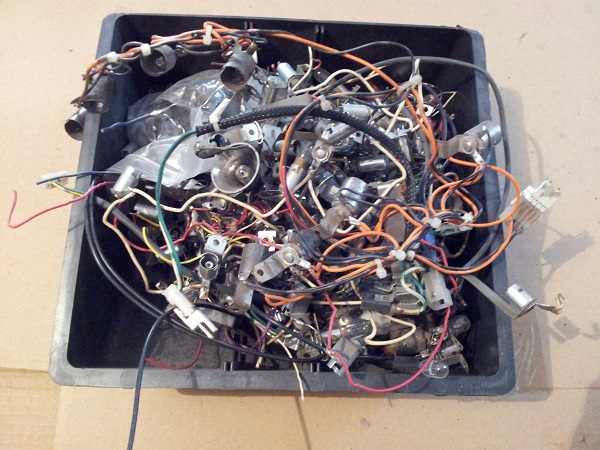 Here’s something quite interesting – a few switch relays. Certainly keeping this. 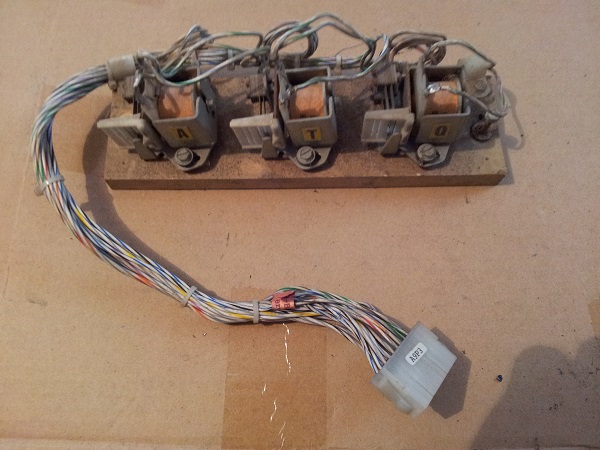 I had finally made it to the bottom of the box and only the crap remained. These parts are mostly broken or worn beyond further use. It’s not an overly large pile considering how much stuff was in the box to start with. The metal cash box was also part of the crap box, but I won’t be tossing that as I can find some storage use for it.

Another (and probably my last for awhile) crap box has been sorted. My spare pinball parts are overflowing now and I really don’t have much need for anything else. If anything I’d like to source some EM parts and some more wiring looms, but that’s about all. Across the 5 boxes of parts, I’ve spent roughly $90 – $100AU and I’m pretty happy with the overall content. It’s helped with some of my current projects as having parts on hand prevents slow down and it’s also good to have access to random parts for future use. It’s also been somewhat fun sorting through parts and finding a few gems along the way 🙂