Playing pinball is fun and it’s something people of all ages can partake in and enjoy. For me, learning how the machines work and getting your hands on the parts that make the games tick take it to a whole new level. In fact I spend more time with my hands on parts than I do on the flipper buttons.

When I was working on that first machine back in January and February, I often found the process very stop-start. In part, this was due to my inexperience with pinball machines and not really being able to plan what I was actually going to need (or being aware of what was available). I kept finding myself held up while trying to source random parts. Certain screw types, nuts, plates, frames, wires, housings, bulbs, etc. Some were easy to source while others more obscure and no real part number to reference. I experienced it again (although to a lesser degree) when working on my Fireball Classic. In most cases the part (or a suitable alternative) were sourced thanks to various sellers or through wanted posts on Aussie Arcade. I decided part way through the Fireball I was going to somehow source a pile of random spare parts from different machines which would help aid me with future repairs / rebuilds.

Enter the “crap box” (or boxes now that I’ve picked up a few). I found these boxes irresistible. Like a big box filled with lucky dip prizes. Some will be cool. Others will be.. well.. crap. Who knows what I’ll score – it brings excitement 🙂 In this first example, I have a 15kg box of random parts that cost $6.60. 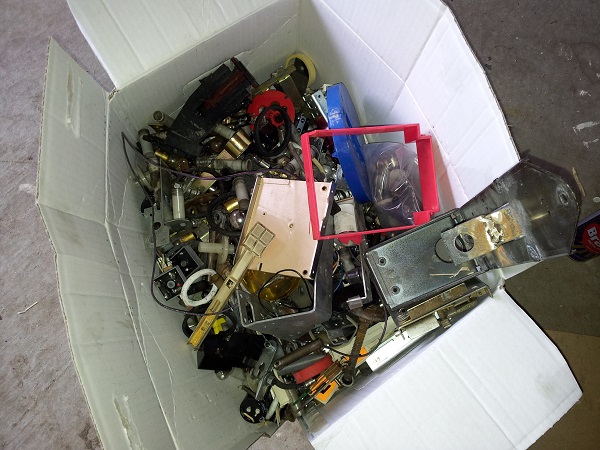 I will have an absolute ball going through this lot. I paid more than that for a recent movie ticket or game of 10 pin. Going through the parts box, excited by what I might find. Sure, there will be some real crap in here that will head straight for the rubbish bin, but – it’s fun finding new parts you’ve never seen before, parts you recognise will suit one (or more) of the machines you own, or even parts you know that someone needs. Then there are (frustrating) times where you find a part that you just recently purchased for more than the cost of the crap box.

On first glance it looks like most (if not all) of the parts are from various SS machines. On the surface level I can see some crap. Used coil sleeves, destroyed rubbers, globes, but who knows what lies beneath. Time to dig in and find out.

My first step was to work my way through the box and sort parts into various piles to then examine in more detail later. This allowed me to also put together a pile of junk that would go straight in the bin. This pile contained things like used rubbers, broken plastic, dead bulbs, burns connectors, etc. This is the sort of stuff that is too crap for a crap box.

The first pile to take shape was an assorted collection of leg bolts. There were various lengths and head shapes. A few were rusted and these will be heading straight for the bin. A number of them would clean up nicely though if needed. I can’t possibly use all of these though, so I will offer the left overs up as freebies to the community. I do spy two longer bolts which could be useful has headbox bolts (that attach the headbox to the cabinet). I’ll set these aside for sure as I can see some value in these for my project machines. 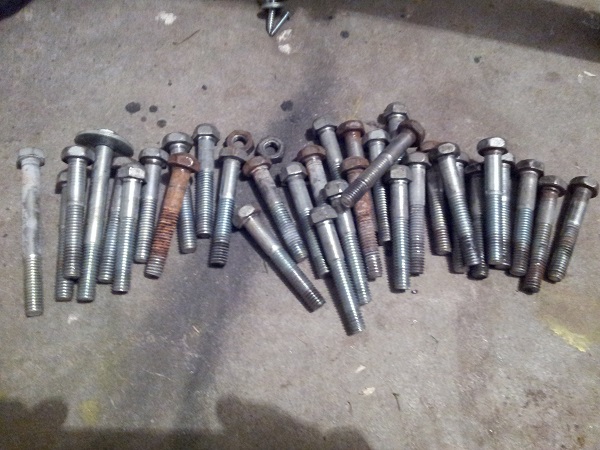 Another pile that filled up quickly is the used coil sleeves. There were lots of these – close to 100 I think. The majority of these will head to the bin. On every machine I’ve worked on, I have tossed out the used coil sleeves once changed over. I’m keen to keep a few of the extra long sleeves and those with a flange as I don’t keep many as backups. The common sized sleeves that I have plenty of brand new spares will be tossed though. Not much value in these but having some backups of the odd ones could come in handy. 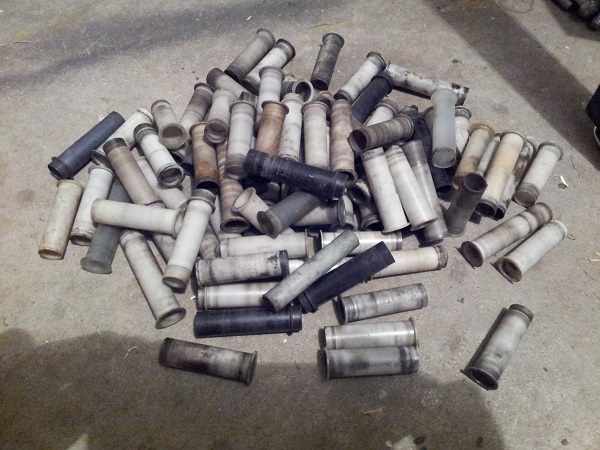 A few caps (16) turned up at various levels of the box. Nothing of value here as I’m not keen to reuse caps. I’d rather buy new ones and replace them – so these will all be tossed. 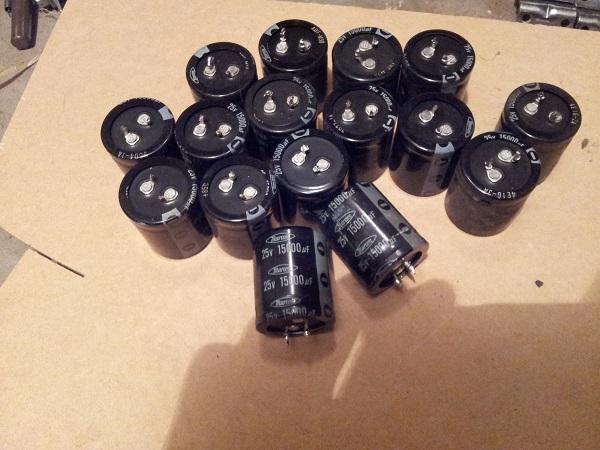 Some leg levelers – 3 in fact. The nuts on each of these might come in handy, so I’ll set those aside. The feet are well used and have not aged well so they can be tossed. I have a spare set already and I can’t see anyone actually needing them, so no need to hold onto these. 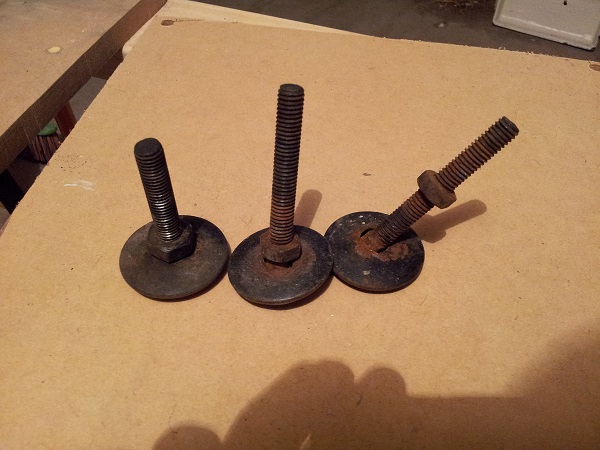 A total of 16 balls turned up in the box. Some very rusty ones and others well pitted. Most will be tossed but a few -might- clean up OK. I’ve been interested in what can be done to restore a pinball, so will set a few aside to look at cleaning and see if there is any value in it. 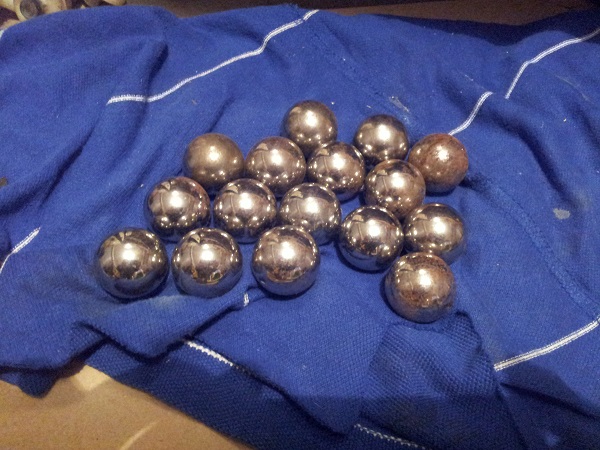 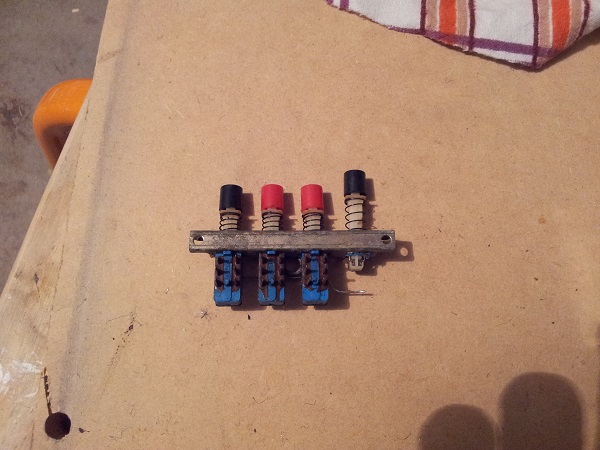 Some smaller piles were also created along the way. Here we have various washers in different shapes and sizes. Also some screws, nuts and even some spacers. These are all handy things to have sitting on the shelf for when required. I often find myself in need of a spare washer, nut or screw that’s gone missing on a new project machine – so this is the sort of stuff I’m happy to find here. 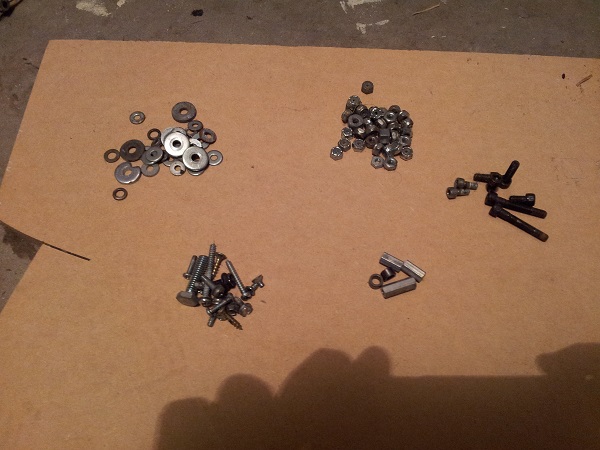 Some random drop targets. The second black target is broken at the base, but the first one is fine. The others are also fine. Not sure on what game they are from, but I’ll put them aside in case someone puts up a wanted thread in the community. 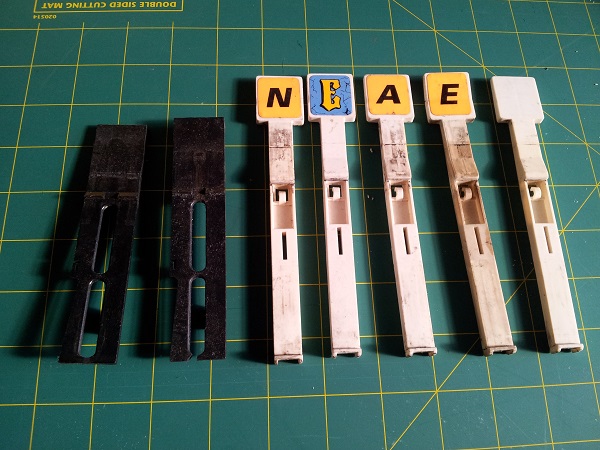 Some more smaller piles. Coin door lock parts. These can come in handy, especially when replacing/fixing a broken lock on a new project machine. Stand up targets – I haven’t needed any of this shape before, but who knows in the future. They are used, but will clean up nicely. One of them had a broken target plastic and this will be tossed. Some fuses – all working. Random switches too. Some cool things here that may well be useful in the future. Most of this will be kept and put aside. 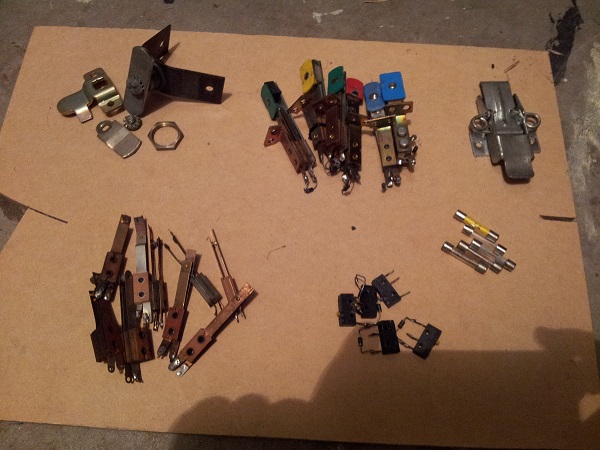 Some coin mechs. All in foreign currency. I’m interested to see if they can be adjusted into Australian currency. These will all be kept. There are two which are not coin mechs, but look to be part of – not sure if these will be kept. 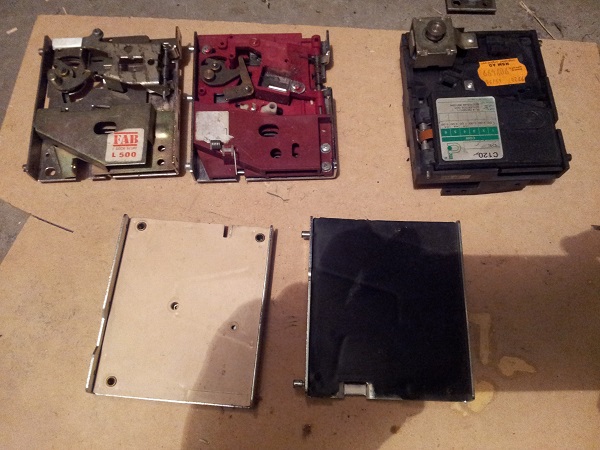 An assorted collection of yokes from pop bumpers. There are a few odd shaped ones here I have no spares of, so will keep. Most will clean up OK and may be useful in a pinch. 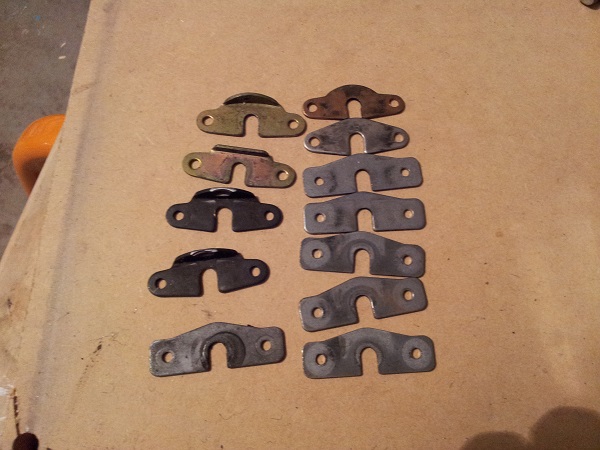 Coil stop city. I’m not overly interested in keeping used coil stops. Most of these look to be from Williams flipper assemblies. There are a few odd shaped ones I’ve not seen so will keep as spares. But in most cases I replace and toss used coil stops. 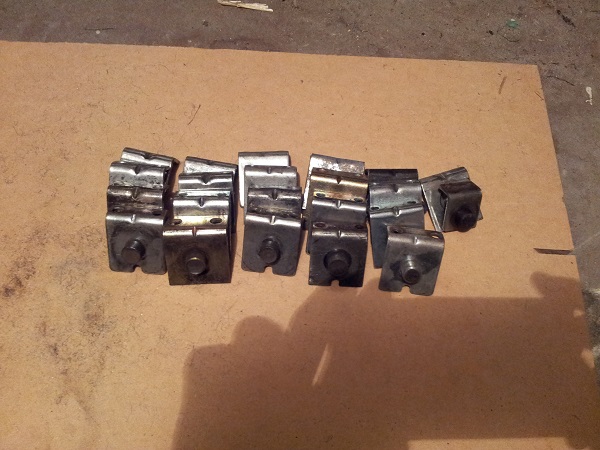 A few flipper bushes. I’m not going to keep these as they are all the same and I toss them when I replace them in my machines. If there had been odd sizes, then I’d be interested as I’m still trying to local some that match those on my Nugent.

Lot and lots of bulbs. This collection is only a sample of what was in the box. I’ve cleaned all of these up as I went. A nice selection of #44’s, #47’s, #555’s, #89’s and a few other types I don’t recognise. These will all checked to ensure not broken, so will come in handy across my machines in the future. This is the sort of stuff I was looking for in the box. 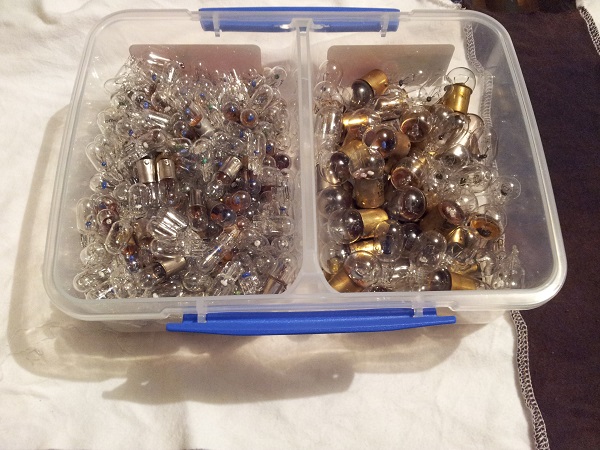 A random assortment of wires and connectors. I really need to stock up on wires and want to track down some spare wire harnesses so I can match wire colours/stripes when required on project machines. Not much here sadly. 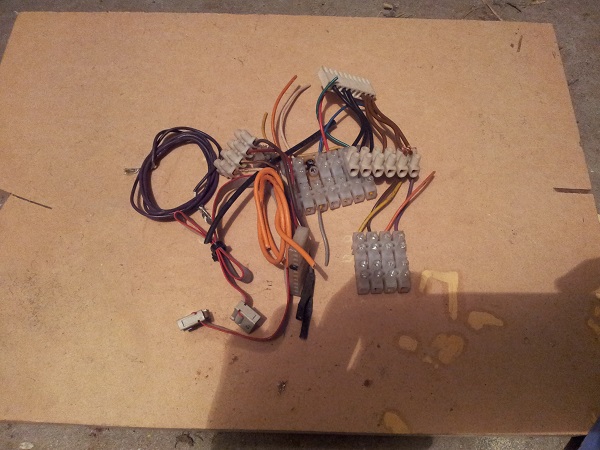 Here is something interesting, some nice buttons and rubbers. I threw out a lot of the rubber in the junk pile earlier. But these few rubbers are actually in excellent condition. I’d say almost (if not) unused as they barely show any stretching. Nice thing here is I need to buy two 1″ rubbers for my pinbot mini playfield – and these two here are a great candidate so will save me having to get them. The buttons are in excellent condition also and cleaned up nicely. Good to score some nice parts in the crap box. 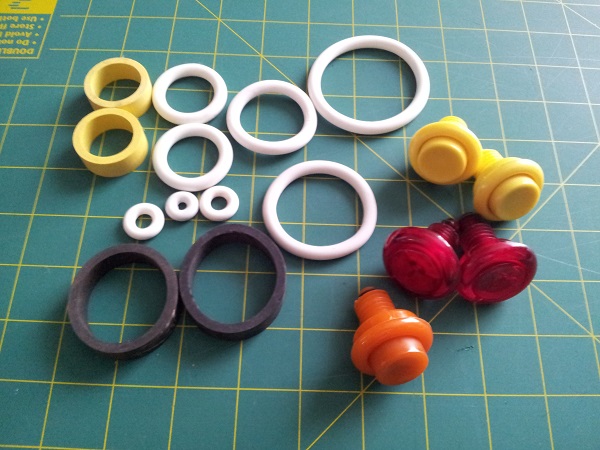 Some Williams flippers (there was a third that is not pictured here). They are in good condition which is a bonus. Three pop bumper caps and a various assortment of star posts and spacers. The red flipper button has seen better days though so will be tossed. The rest of it though will be kept. Good to score even more nice parts in a crap box.

A ball serve assembly with coil. A spare Williams coil. A battery attachment and a few twist #555 sockets are the pick of this lot (the service panel switches I mentioned earlier (and you can see I’ve already raided the two black caps!).

Some random assemblies and frames. Nothing immediately useful here, but these stuff will be kept for later as I may need it, or someone else may come looking. Some smaller parts of the assemblies could well come in useful like e-clips, pins, screws and small plates. These are the sort of parts I sometimes find missing and a pain to track down. So good parts to hold on to. 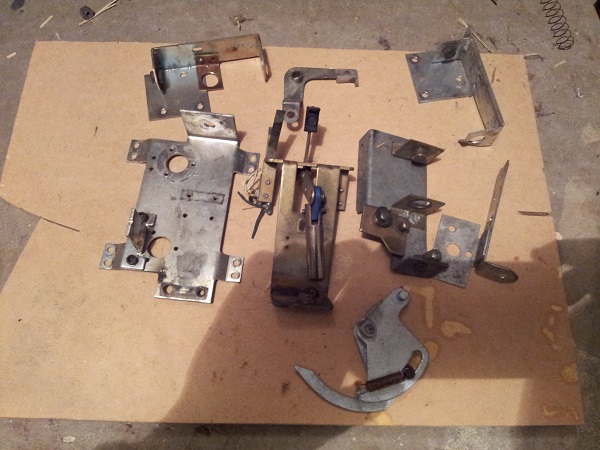 Even more random parts. The coil stop here is perfect for my Williams Pinbot machine should I need to swap one in. A collection of springs and even an unused coil sleeve (makes a nice change from the 96 odd used ones earlier!). I like having a selection of springs handy, so these will be kept. A few more #555 twist sockets too. 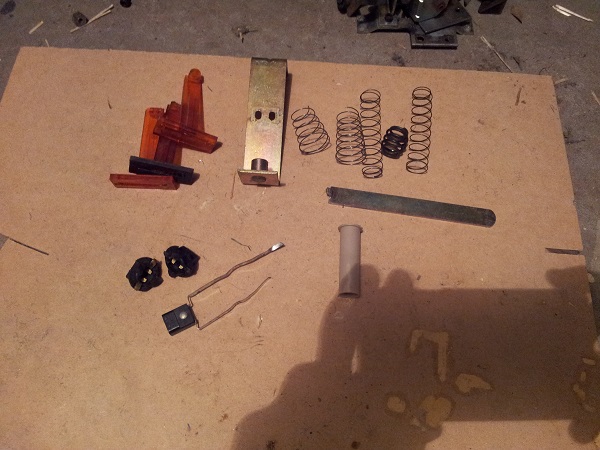 Finally a few random metal parts. I may keep these for the short while but not sure if there is any value in holding them long term. 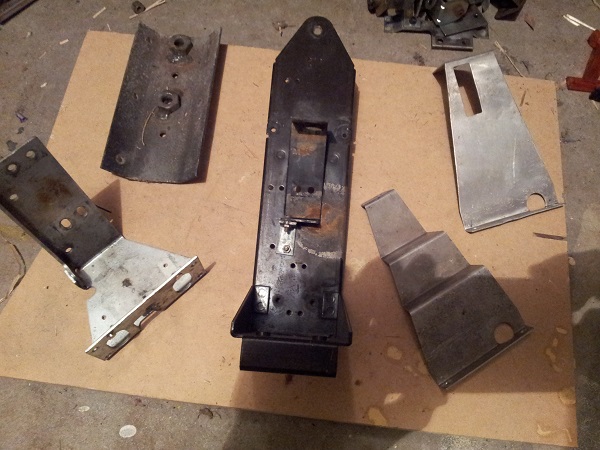 That now brings me to the end of my first crap box of second hand pinball parts. For under $7 I’m really happy with it. Lots of crap in there for sure and many things tossed out. But there were a few parts immediately handy which is nice. There were also a range of parts that might be useful for myself or others in the future. Looking forward to sorting through my next haul of pinball crap to see what sort of treasures I can find 🙂