On even closer inspection I could see the jumper wire was no longer connected to the bridge leg. If you look closely, you can see the board trace that once existed is now gone (just below the BR1 printed text) which is what the jumper wire was put in place for. 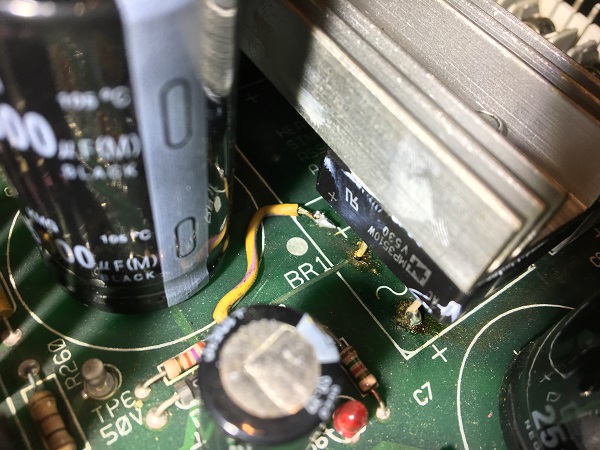 The board was removed and this fixed. While I had the board out, I went around the solder joints for each of the header pins and reflowed fresh solder across them. Several had cracked solder joints. 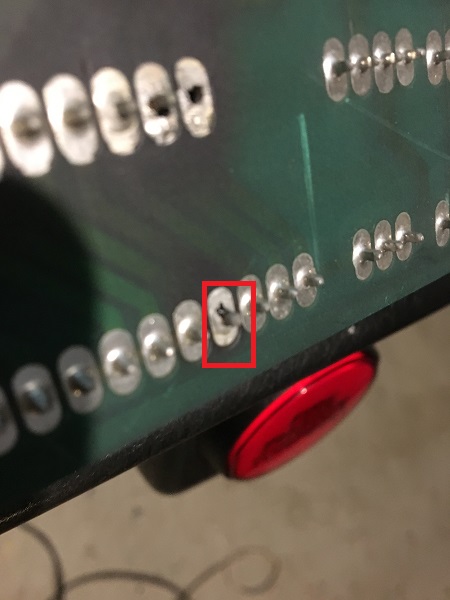 Once I had the board back in the machine, the game now booted correctly to the attract mode. Next up I needed to address a few issues with the GI. While looking at the 12V issue above, I noticed a rather burnt GI connector. It was so crispy that the connector broke while being removed from the board (which I had to do for the 12V repair). 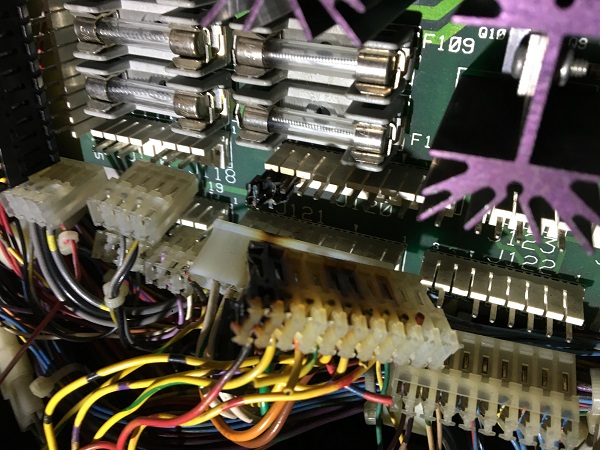 Interestingly, the connector had wires from another game. It looks like it was cut off another machine and then joined up to the original GI wires in this one. My guess is the old connector burnt up and this one was quickly installed. Given its obvious fate, I’d say the header pins on the board were not replaced at the same time and the connector burnt out again. 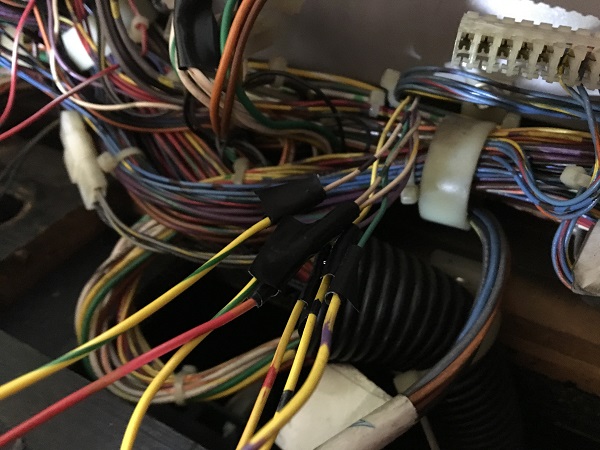 The old connector was removed. There were several unused additional wires that had been snipped off. 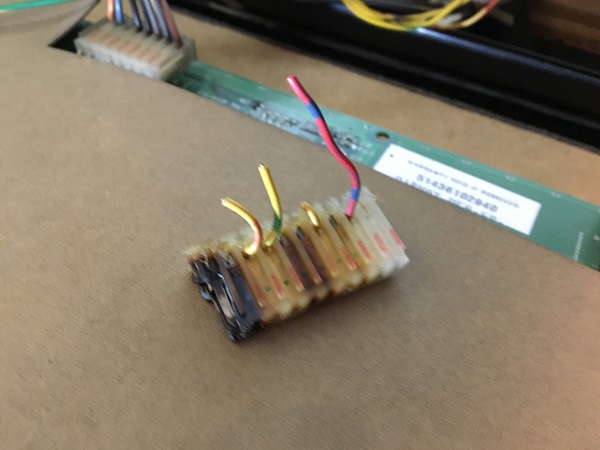 There are two connectors for the GI and the second one also had visible burn marks. This one also needs to be replaced.

When you replace the connectors, you need to do the header pins too. You may ask why not replace these while I had the board out looking at the 12V issue earlier – the reason for that was to remain focused on one problem at a time. I didn’t need the GI plugged in to get the game booting so once I had resolved the boot issue, I felt confident to move on to the next issue.

With the header pins and connectors replaced, the board was put back into the machine and tested. There was still one string of GI not working. This was eventually tracked back to a bad trace on the board. A small jumper wire was run between the bad trace. 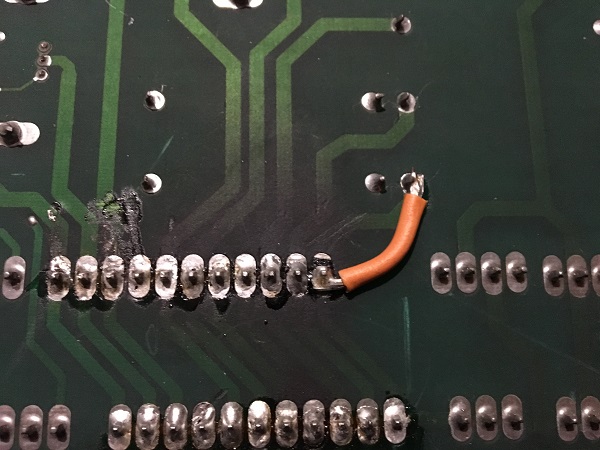 The board was put back into the machine (hopefully for the last time!) and now the GI was fully working. Next up – a flipper issue. The owner mentioned to me that the machine had a flipper issue where they wouldn’t fire when the buttons were pressed and he had tracked it back to being the flipper board in the headbox by swapping in a spare flipper board. Swapping in the spare flipper board myself saw the flippers working again. But the spare board wasn’t really spare since it’s needed in another machine. So this one needs to be fixed. Manually moving the flippers when in switch test, I’d expect to see the EOS switches fire. They didn’t. On the flipper board itself are a set of LM339 chips. These are used to translate switch activity and seemed likely to be the problem. Sadly they are not in sockets. The offending LM339 was removed and a new one installed with a socket. With the board back in the machine, the flippers were tested and now working correctly. The spare board could go back to it’s rightful home too. 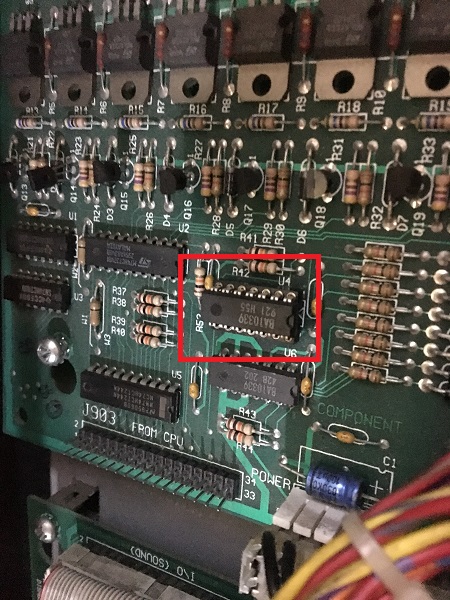 With the key issues now resolved it was time to move onto some cleaning. Time to clean up the shooter rod. 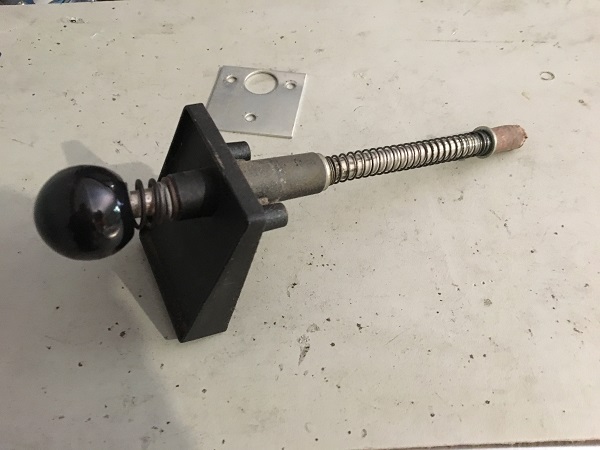 The tip was well worn, with the rubber half hanging off. This is at least better than machines where the rubber is completely missing and the shooter rod deformed from directly hitting a ball for who knows how many years. 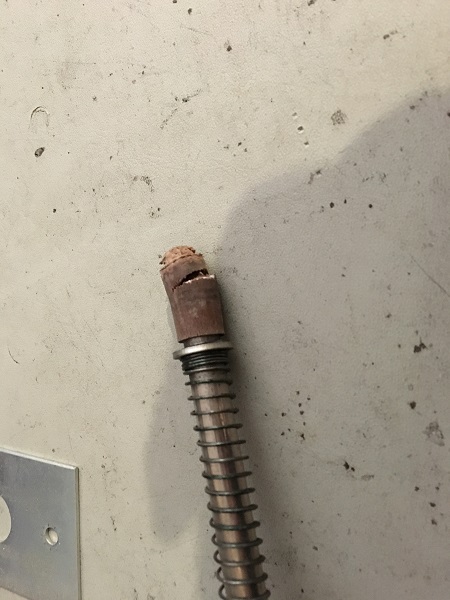 The rod itself has some crap built up on it, which didn’t allow for a nice smooth launch action. 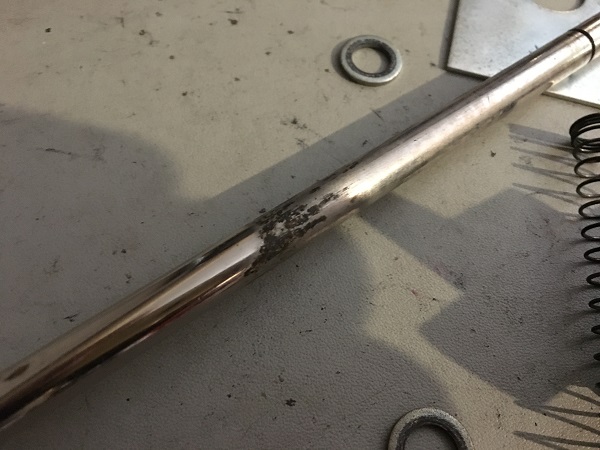 The shooter assembly was disassembled and cleaned. A new barrel spring, coil sleeve and shooter tip were purchased to replace the old ones. 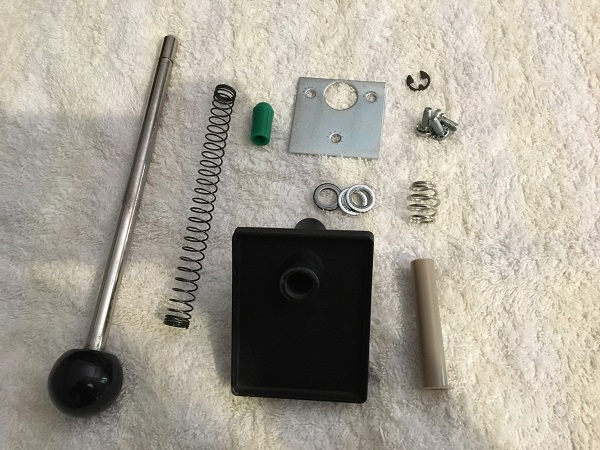 The shooter rod assembly was rebuilt, ready to go back into the machine. It now has a nice smooth feel when launching the ball – just as it should be.

The old flippers buttons were looking tired from years of use. A new set were purchased to give the old ones a well earned retirement.

With some nice weather happening, I decided to make the most of it by looking at the coin door. This one isn’t in terrible condition, but needs a freshen up. 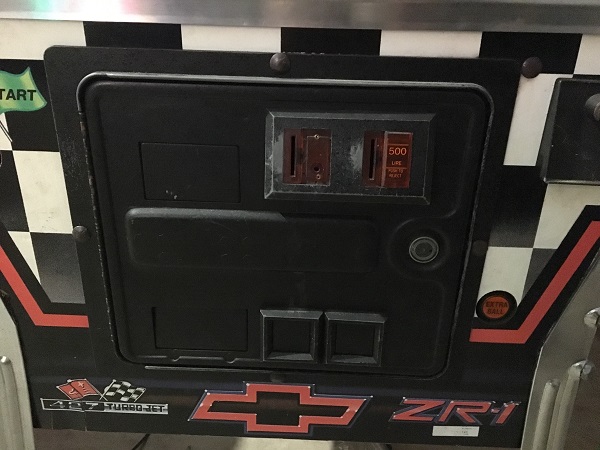 The coin door and its parts were resprayed with gloss black and then a clear. 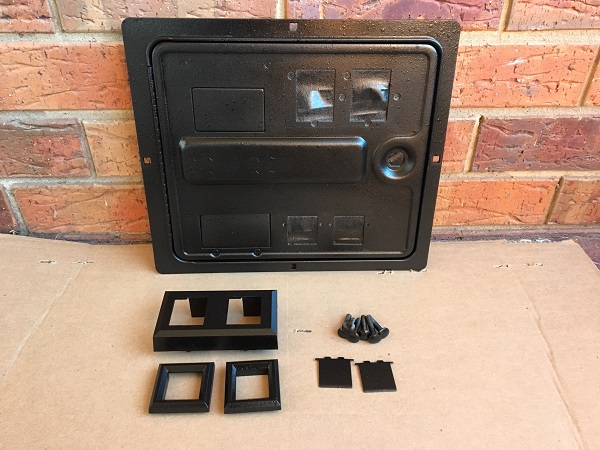 I recreated the speckle effect across the coin door too. 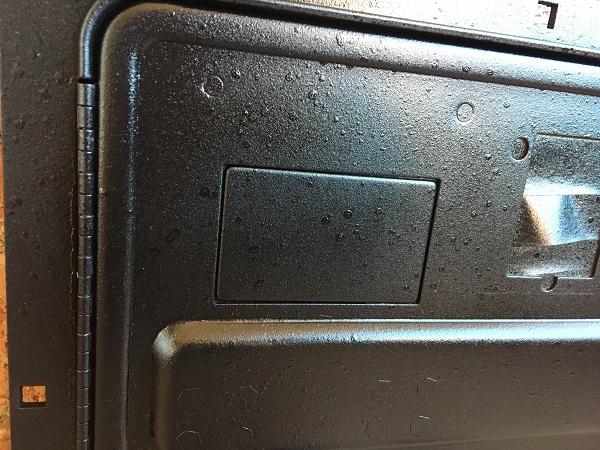 Something I do to all games I work on is create custom coin slot inserts. I’m surprised at how many people overlook little things like this. After a design was settled on, I printed them up to install. 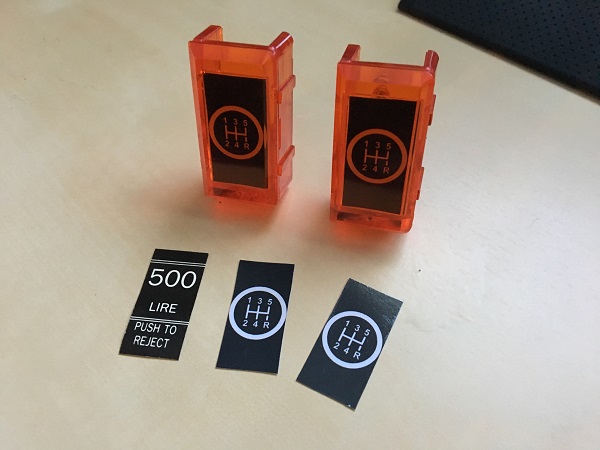 While I was happy with how the coin inserts came up, I wanted to add something a little extra to the coin door to set it apart from other Corvette machines. I decided to make up a small decal to install on the small panel in the top left. 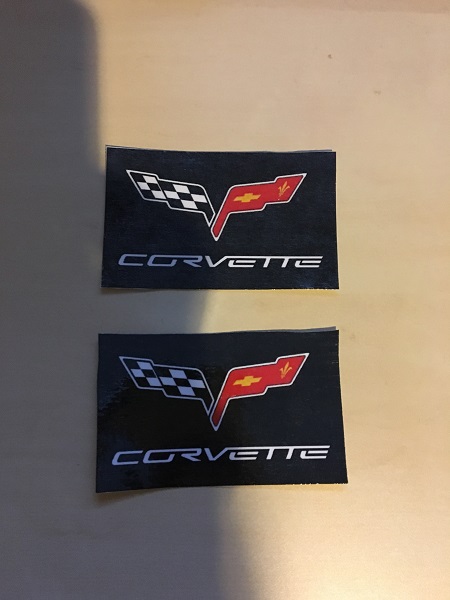 The coin door was then reassembled and installed back into the machine.

It’s amazing how filthy the lamp boards often get in our games. Corvette is no different in this regard. All lamp boards were removed for cleaning. This was also a good opportunity to replace the non working globes I noticed during earlier testing. 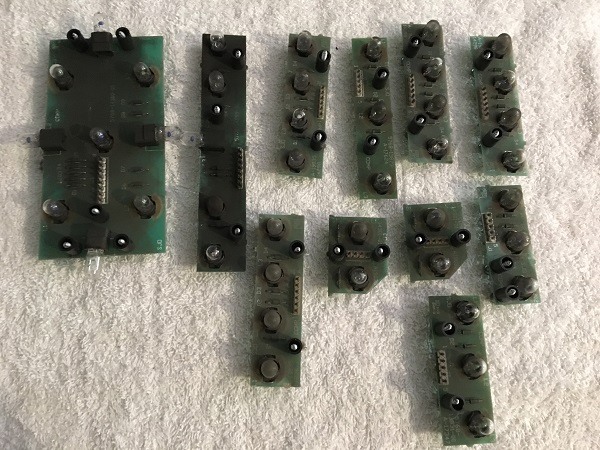 With a bit of attention, they clean up like new. Each globe was also cleaned and any that had been marked as non working were replaced. 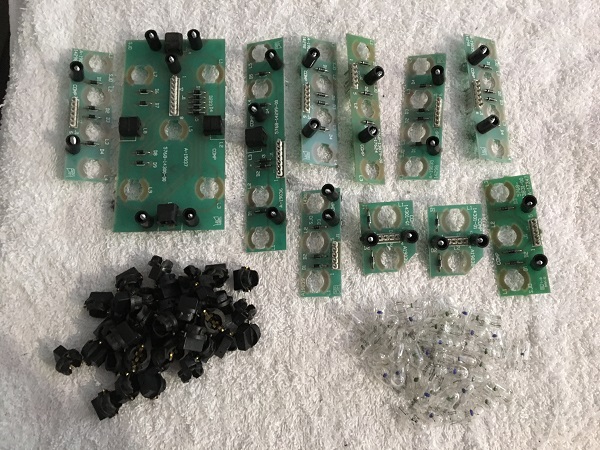 The inserts often attract the filth too, which isn’t going to allow the same amount of light through. 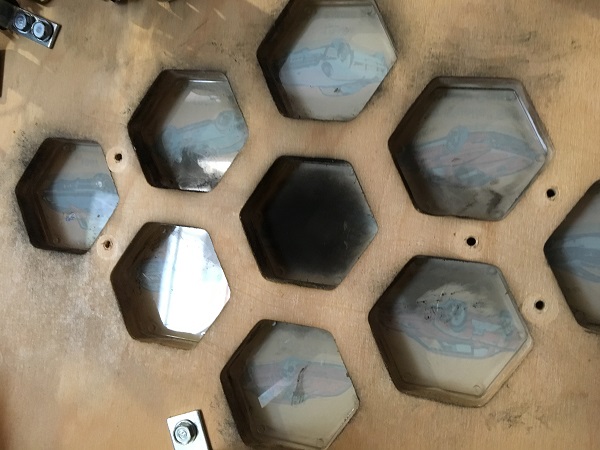 A soft cloth and some Nifit make light work of it through. I went through each insert below the playfield, giving each one a clean. Most are easy to clean. It’s only the arrow or small inserts that present a challenge.

While working my way through the non working insert lamps, I noticed one of the sockets on the lamp boards was broken.

I have quite a few spare lamp boards from parts boxes I’ve purchased over the years, so replacing it was simple. 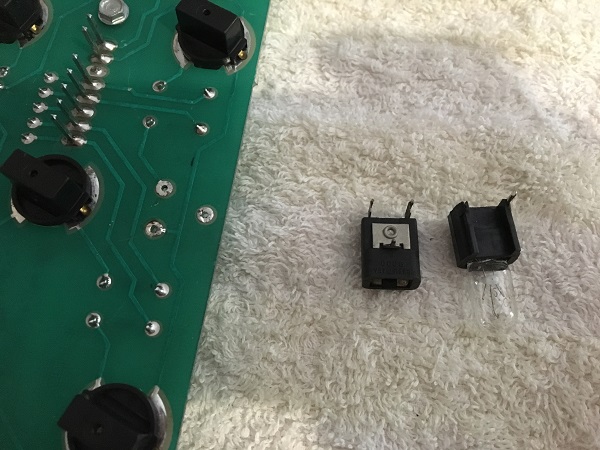 Installed again, the lamps were lighting up nicely. 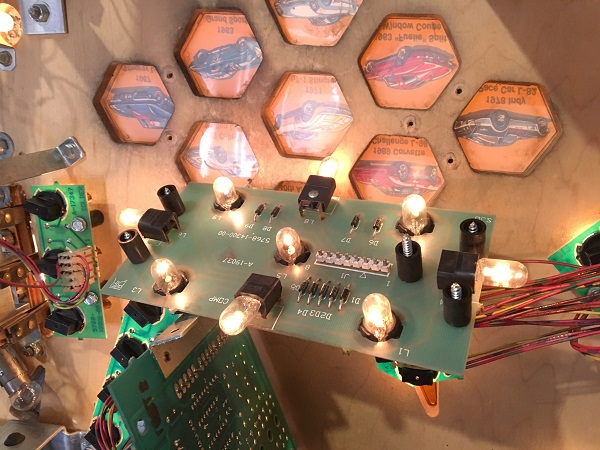 During initial testing on the game I noticed that some of the GI bulbs were out. In some cases it’s the globes, but in this case a wire had come loose. It sits right below the upper flipper assembly, so has probably been impacted with some heavy vibration over the years. The wire was stripped and soldered back into place. 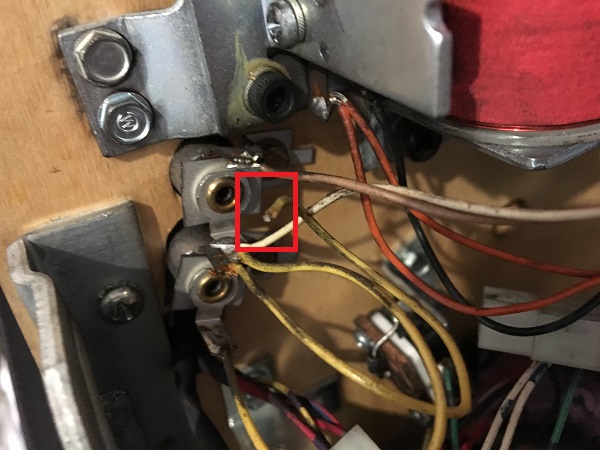 I like to spend some time cleaning the bulbs in the headbox to help get the translite looking bright and colourful. It’s one of those quick wins that don’t cost anything other than some time. These bulbs weren’t too bad, but there was some dust and filth built up on the surface. Any bulbs that had been marked as not working were replaced. 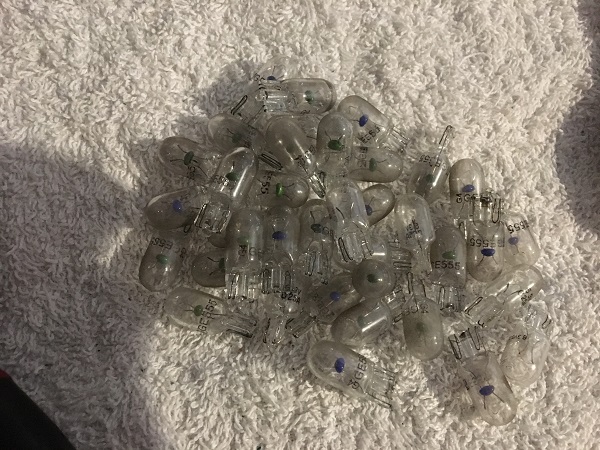 Each one was cleaned, ready to go back in to the game. This is the sort of thing that drives my Wife insane. I’ll fuss over cleaning 100 tiny globes, but can’t be bothered wiping the kitchen bench down 😉 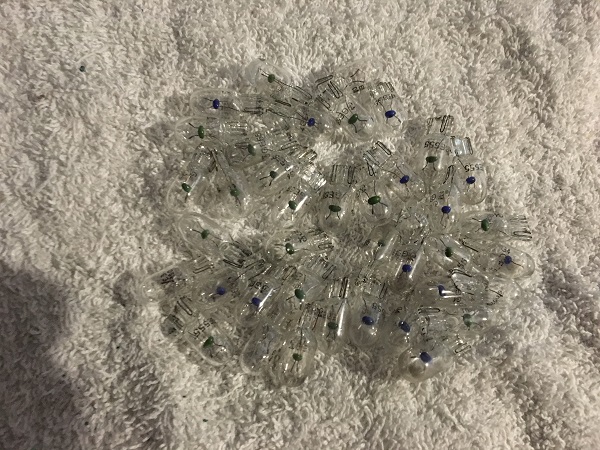 While I had the translite off to clean the bulbs, now seemed like a good time to give it a clean also. It’s amazing how much filth can attach itself to the rear side of the translite over time. 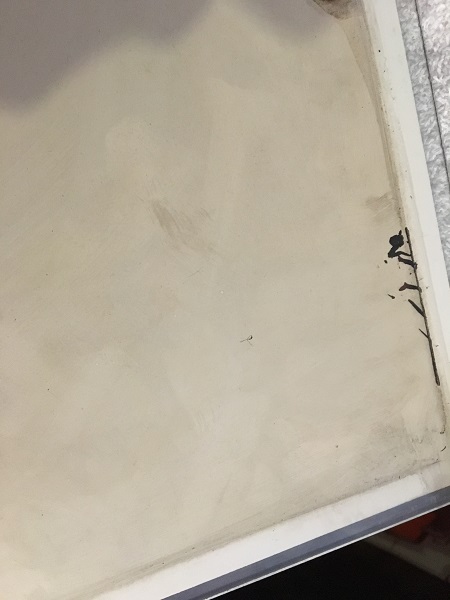 Giving it a gentle wipe down with some Nifit on a soft cloth, the filth cleaned away with ease. 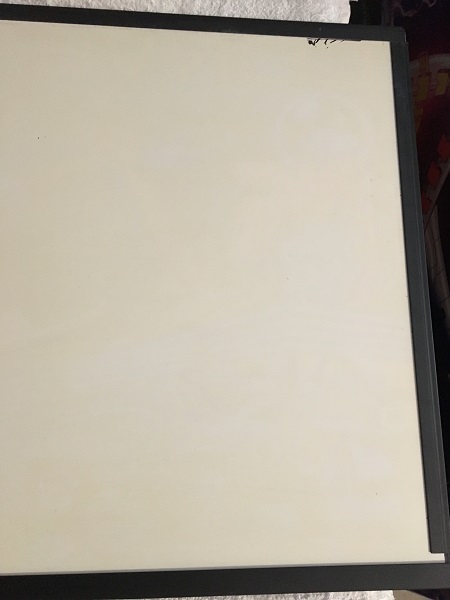 The plastic lift channel at the base of the glass was cracked and needed to be replaced. A new piece was purchased and installed to get the backglass rebuilt. 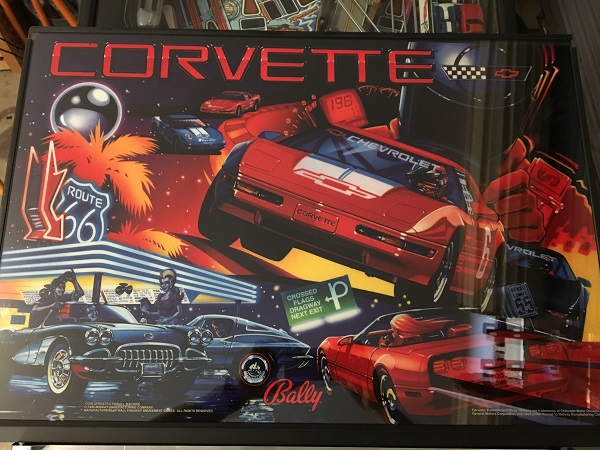 With the bulbs and translite all cleaned up, the colours now look much better when lit up. 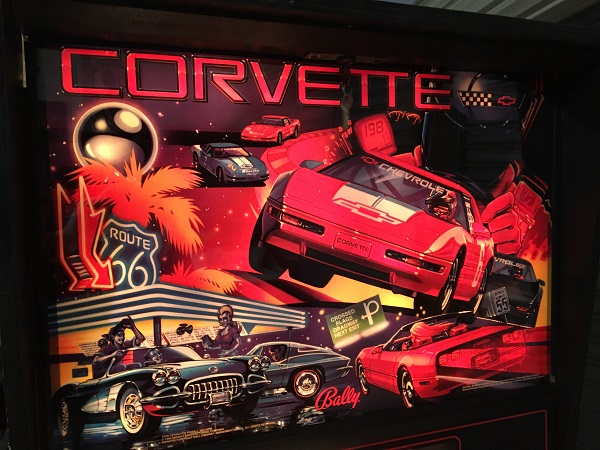 That’s it for the first update. Next up i’ll be going through the apron area, the flippers and sling shots. From there I’ll continue my way up the playfield. Normally I like to break the machine down into sections, that way I don’t have too many parts off at once. But on Corvette, there are so many ramps and rails on this playfield – including a drag strip – that I may have to take the plunge and remove a lot all at once. We’ll see. Until next time!