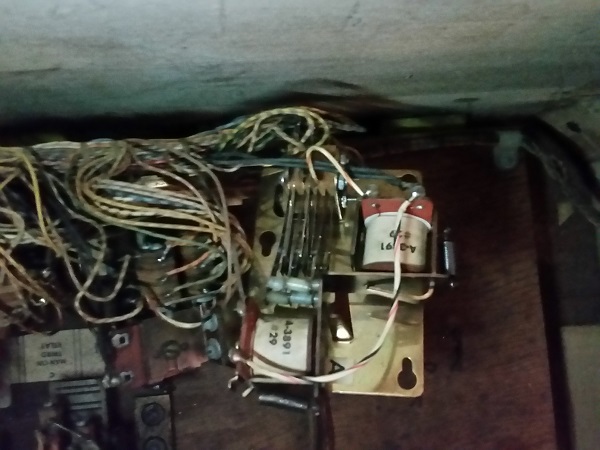 When you press the start button, the three man on base relays should reset to their “off” position. This means at the start of a new game, only the home base should be lit. Right now, this does not happen. Occasionally (actually, rarely), I’ll get the 1st base relay to reset, but that’s about it. These inter lock relays can be a bit of a problem and are known to be a source of issues in these machines. But before I start adjusting and fiddling with these relays, I wanted to understand more about their role in the game. I could believe 1 or maybe 2 of the relays failing. But all 3 suffering the same issue says to me the problem lies elsewhere and I should investigate further before adjusting relays that may in fact be fine.

Around the playfield are a number of base targets, which are lit when there is no man on the corresponding base. As shown here, the #1 target is lit, while the first base is off. 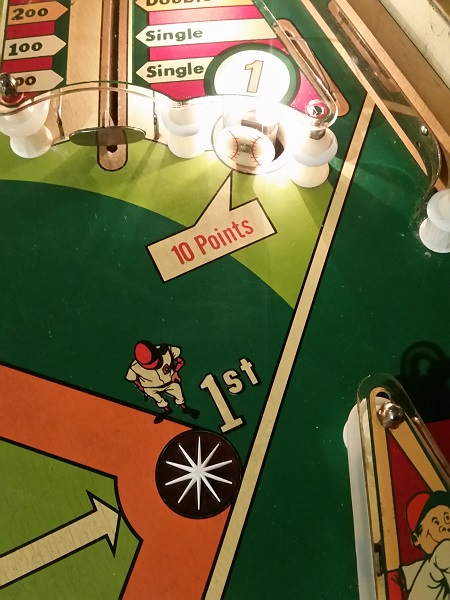 When you activate one of the lit targets, the base it refers to will light up and the target light switch off. Here we see that the #1 target is no longer lit, and the first base is now on. 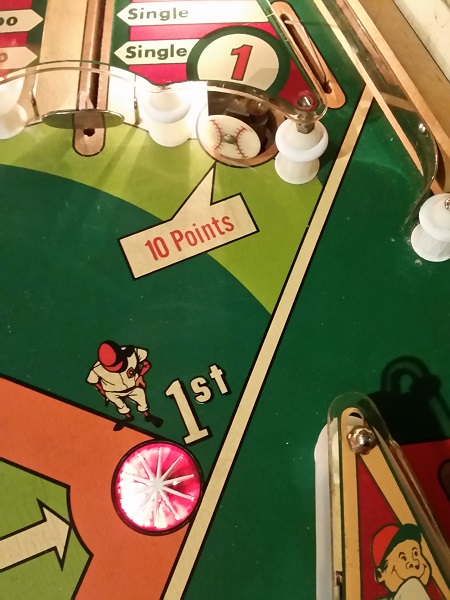 This is working 100% of the time for all 3 man on base lamps (home base is always lit). So that tells me the coil on each of the interlock relays that is used to activate the man on base is working. But which relay is that? A/B/C or AR/BR/CR? I think I know, but off to the schematics to confirm. A quick look shows that the A/B/C relays all run through the number switches to activate them. They also run through the hit unit, which would be part of the feature that advances men around the base and activates them accordingly. 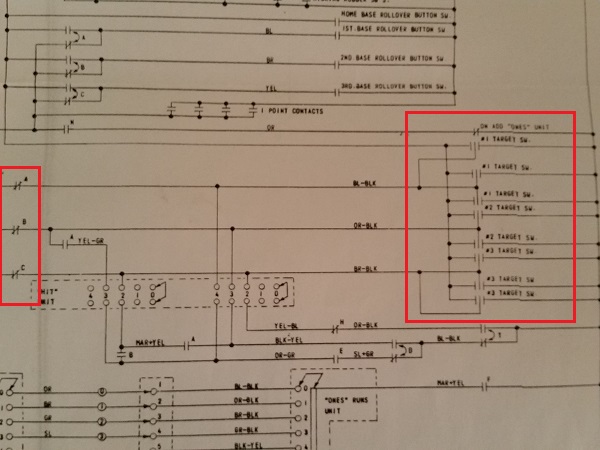 The AR/BR/CR relays however only run through the hit unit and the score motor switch 1A. That’s it. Not a lot required to reset them. These are the ones I’m interested in. A quick visual inspection of the coils showed the looked good and a their resistance tested OK too. All wires looked to be firmly in place and there was nothing abnormal about them. 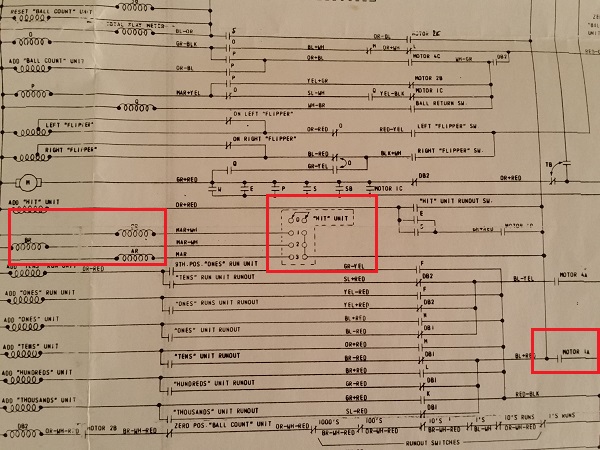 So let’s assume – for now – the interlock relays are OK and investigate how they are activated. A look at that score motor switch these coils join up with shows that it’s the same switch used to reset the score reels. I know for certain that this works correctly as the score reels all reset correctly and the game completes its reset sequence. So the score motor switch is not likely to be the issue. That leaves the hit unit as my first target of interest. 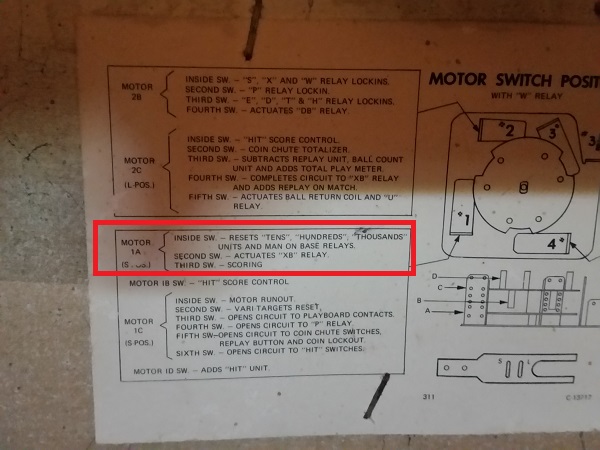 If you remember from the last update, I had already sorted out a few issues with the hit unit itself. The coil was dead and replaced, along with the home switch needing to be adjusted. That got the unit active again during the reset sequence. There could well be issues with the interlock relays, but I suspect the hit unit is the cause of the issue I’m currently looking at. 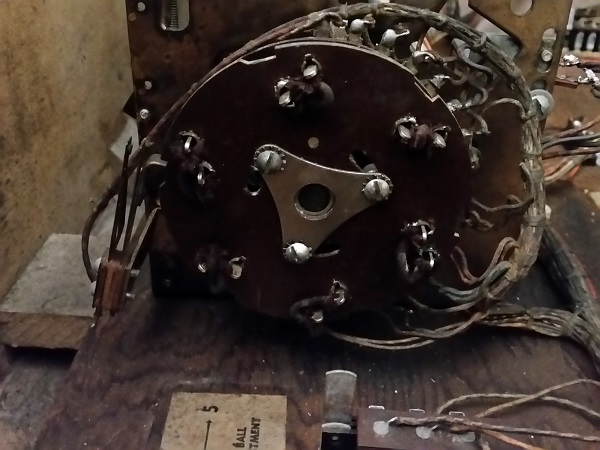 So from the schematics, I could see that each of the 3 reset coils on the interlock relays run through this unit. If there is some sort of contact issue, I believe it would prevent the coil from firing when the score motor switch closes. I manually advanced the unit and noticed that the steps (in degrees) it took were not always consistent. Sometimes it would overstep the rivet while other times just reach the rivet. In other cases, it would land dead centre – which is where I want it to be positioned 100% of the time.

The plate that spins around on the stepper can be adjusted by loosening 3 screws. The rivets on the stationary plate looked quite dirty, so I decided my first action would be to clean the plate and shoes. I could then adjust the position of the moving plate and hopefully each step would be consistent and accurate. You can remove the to plate via 3 screws on the front.

With the plate removed, the rivets were cleaned up and then a small amount of gel lube applied over the surface. Check out the grooves that have been worn in to the rivets on this thing. It’s certainly done a few revolutions over the years. 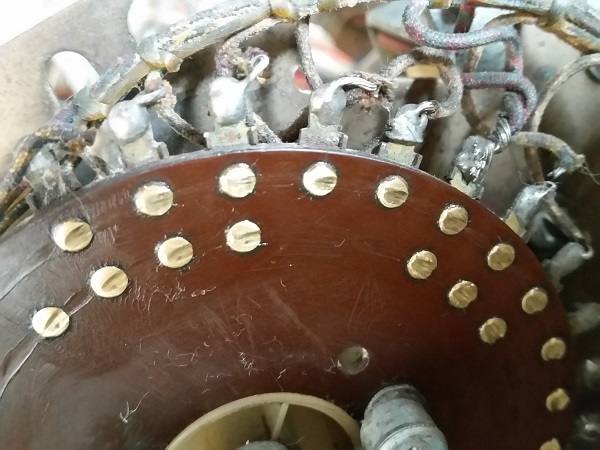 Unfortunately, I believe this stepper unit is quite custom to the game (and maybe 1 or 2 others?), so I’m not sure how easy it would be to find a replacement (new or second hand). The top plate was installed back onto the unit and the game started up. A new game was started and the state of the man on base relays observed. Same story – not resetting correctly. I again manually stepped the hit unit and looked at how the shoes lined up with their rivets. It still wasn’t consistent. The movement was much smoother, but the shoes did not always line up nicely.

I put my hand on the outer disc and gently checked to see what sort of free movement it had. I was surprised at how much I was able move the disc with my hand. We’re only talking about 2mm – 3mm, but it was enough to put the boot on the rivet, or have it not connecting. Because this continuous stepper is very close in design to the match stepper in the headbox, I took at look at how much movement it’s disc had. There was some, but very little. The boots always connected with the rivets. There was too much free movement with the hit unit. Adjusting the position of the plate would not solve this. So why so much free movement?

The answer lay with a small metal arm on the reverse side of the hit unit. 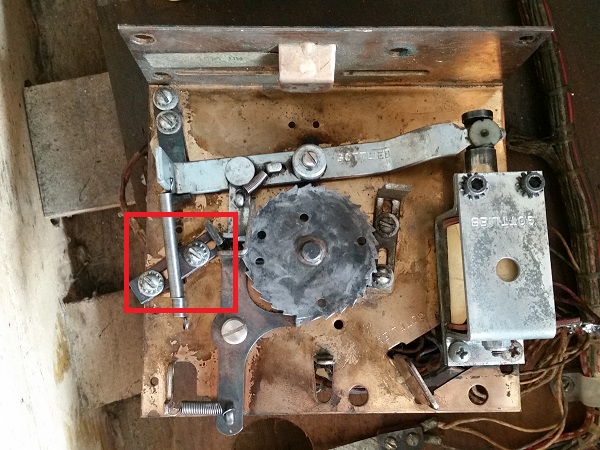 This small arm controls how far back part of the stepper arm mechanism can move. It has two screws, which can be loosened to adjust it. I loosened them up and moved the arm in about 1mm. Not much at all, but it was enough to remove the excess free movement seen on the disc. Now, when I manually stepped the hit unit, the boots connected with the rivets 100% of the time. No under step. No over step. The boots were on the rivets every step and its stepping action was nice and smooth.

A close look at the hit unit again showed the cause. A wire was not connected to one of the lugs. I handn’t noticed it earlier as the wire looked to be sitting in the correct spot. But with my finger gently across it, the wire moved freely away from the lug on the plate. 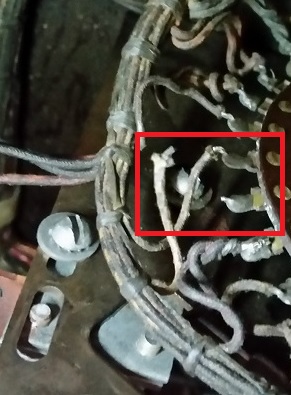 This was soldered back on and the reset sequence tested again. The 3 bases were switched on. 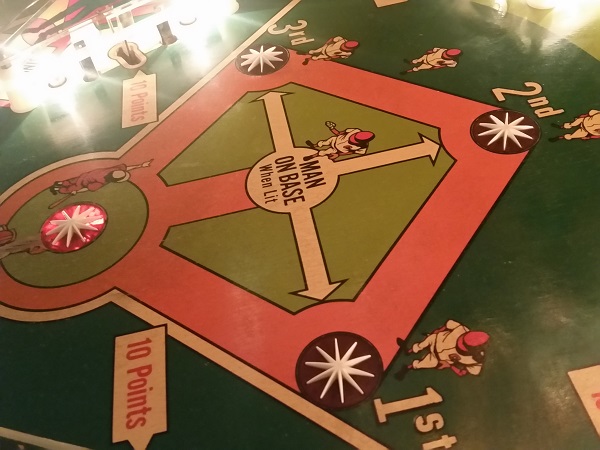 Moving that small metal arm made all the difference as it now ensured those boots would line up correctly 100% of the time, and when the score motor switch activated, the AR/BR/CR relays would trigger as required.

Now to test moving men around the bases. Sure they reset correctly, but what about during play? The bases need to be able to switch on and off as you make “hits” and the men advance towards a home run. I ran through various scenarios for moving the men onto bases and scoring runs. The scenarios worked most of the time, but not all. There are two issues I can still see. In some cases, the 3rd base does not light when it should (say you have a man on first and second and then get a single – this should light up third, but does not always). There is also a couple of cases where the score motor continues to run and I believe this is related to the single relay as it seemed to be an easy way to reproduce it. Sadly the score motor running issue isn’t consistent, so it’s not so easy to pin point the cause yet. The good news though is through all the testing, all 3 bases continued to reset at the start of a new game. So i’m confident that problem is now solved.

My next step is to sort these two issue out. I’m hoping to find some pattern to the 3rd base not lighting issue – it seemed to happen more frequently when I used singles to advance the men, but I need to investigate more before I form any theories.

I’ll leave the update there for now – more progress has been made, but we’re not quite there yet. I hope to set aside some more time over the next week to investigate further.