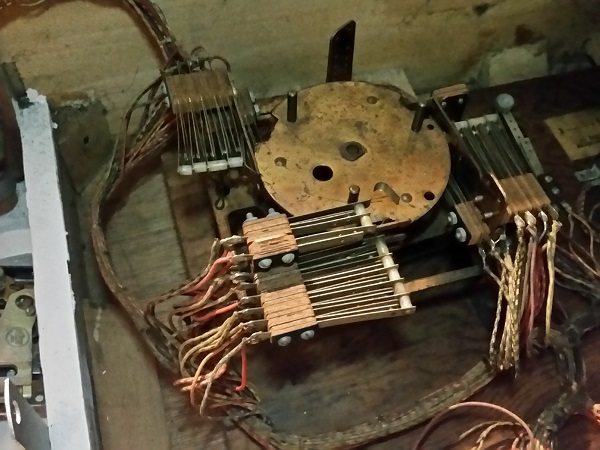 During further testing, I managed to find a second situation where the score motor would continuously run. The first is when activating the single, double or triple switches. The second is at game over – the game switches to the game over state correctly, but the score motor continues to run. Sometimes the score motor will come to a stop on its own – but that could be anywhere from 10 seconds to 2 minutes. Other times it doesn’t stop at all. Both of these issues are intermittent – so I may get 3 or 4 complete games playing without issue and before the problems kick in. Then they go away for a few games before returning again. At this point there were no clear signs of the cause. So something isn’t quite right – but given I can play several games successfully – we’re close. That’s a motivating feeling.

I started with the hit switches, since this seemed to be the easier one to reproduce. I simply had to keep rolling the ball over the single, double or triple switches until it eventually caused the score motor to run. There are a number of switches spread out across the playfield for this. There didn’t seem to be exact combination required or certain switches that would cause the issue.

This also proved to be a good test for the work I did on the hit unit in the last update. I’m happy to say the hit unit and 3 latch relays are all working great and not missing a beat. The score and hit counter relays also held up well during this testing. Something interesting I noticed while doing this was, at times the score motor would want to stop but at the same time want to continue on. It would make a stutter effect before finally stopping. There is a brake switch on the score motor to prevent it going too far. This is easy to spot as it’s the only switch on the score motor that doesn’t have any wires running to it. 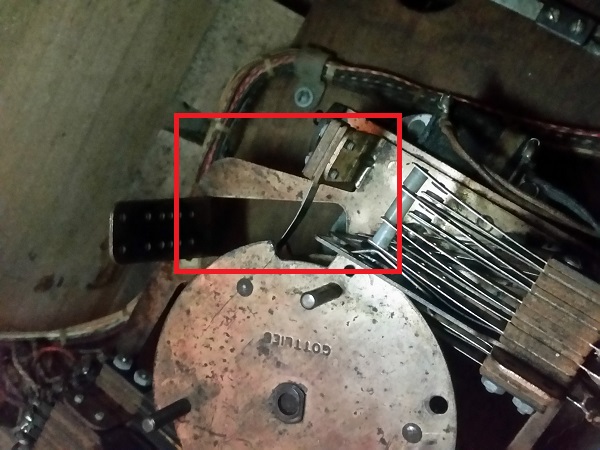 Sometimes these switch blades can be broken – but here it was fine. It’s not designed to prevent the score motor from spinning if it’s being told to – only to stop it from going too far once the power it cut from the motor. So this isn’t likely the issue – but something to worth checking anyway. I put the score motor stuttering to the side for the moment as it too was intermittent and had no clear way to replicate. I examined the single, double and triple relays at the base of the cabinet. The double and triple relays looked fine, while one of the blades on the single relay was a little too close, causing it to make contact when it should not. 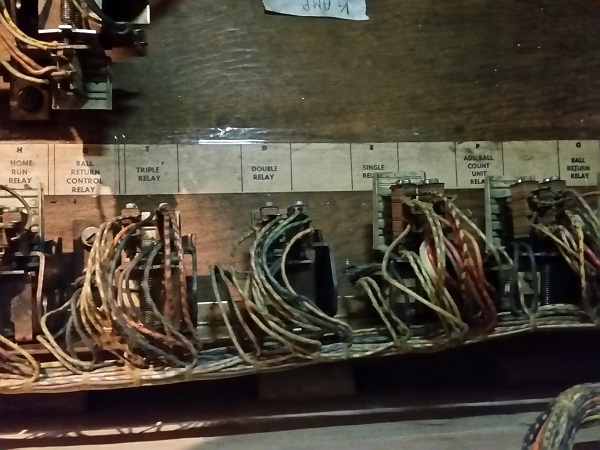 After the adjustment was made, I again tested the machine. It held together a lot better and took longer to get the score motor issue occurring. But sadly, the issue was still there.

I continued to diagnose the issue and eventually got to a game over state with the score motor running again. Now was a chance to look at this second issue. The game over relay tripped and “Game Over” was lit on the headbox. The game knew it was in the game over state, but something was causing that score motor to continue to run. I wanted to check the game over relay itself – even though I had looked at it several times in earlier updates – maybe I missed something. 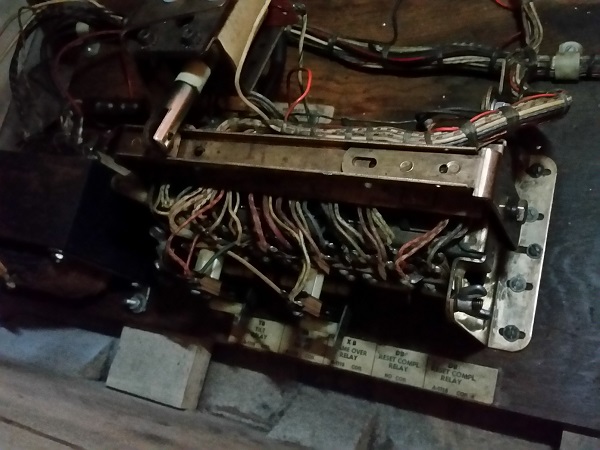 At this point, I wondered if the large reset bar on the control bank was not sitting properly and causing a switch (or a few switches) on the relays of the control bank to be in an incorrect state. I applied a small amount of pressure with my finger to the reset bar arm, making sure it was away from relays. The score motor suddenly stopped. Hmm, that’s interesting. I switched the machine off an swung the control bank relays up for a closer look. There was no way the arm was in contact with any of the switches on the relays. In fact the only switch it could touch was…. The SB armature switch. Yeah – that guy. The one that had been causing all sorts of issues with the game reset sequence (see earlier posts). The reset sequence has been working 100% since I fixed it in an earlier update – but maybe my work in this area was not yet complete.

There are two small metal brackets, one on each side of the control bank. Adjusting these allow you to control how far back that large reset bar can go in its resting position. Since it’s resting position appears be causing the armature switch some grief, let’s make a very small adjustment. 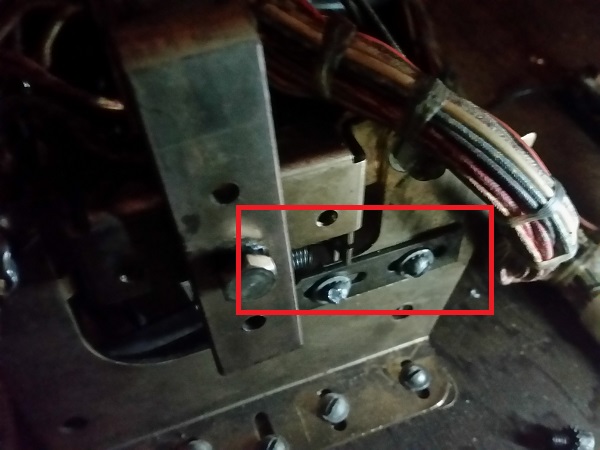 I first marked the original positions and loosened the screws on one side. The metal bracket was adjusted only 1mm and then tightened up. The same was done for the second side. I did them separately so the position of the first one acted as a guide for the second side. With the reset bar now sitting slightly further away than it was before, I fired the game up. I got through 20 games without any issues. A new record! No score motor issues at game over -OR- on the single/double/triple switches. I put about 40 or 50 games in on 3 ball mode without any further issues. Not once did the game fail or even look like failing. That small adjustment to the reset bar on the control bank made all the difference and solved two problems. The owner wanted the game set to 5 ball mode, so this was a good chance to test that out too. I switched the game to 5 ball and played more. The first 10 or so games played without any issues. I thought I was done.

Having let the owner know the machine was good to go and all issues sorted, pick up was arranged for later in the week. I continued to put in 5 – 10 games each day to continue testing and weed out any additional issues that were lurking. Better to catch them now while the machine was here. I’m glad I did this. Two days later I returned to the game and first game for the day, after pressing the start button, the game failed to reset correctly and the score motor continued to run.

After picking myself up out of the floor and wiping away the tears I begin to investigate. Why is it now not resetting? Turned out to be really simple. The ball count unit was having trouble resetting back to home position during the reset sequence. The ball count stepper is a step up/reset stepper. I noticed that the ball count was sitting on 3, so that unit had attempted to reset to the zero position, but failed. When I manually moved the stepper back to zero position, the reset sequence completed and a game could be played successfully. The solution here was to clean the 4th and 5th rivets (I ended up cleaning them all) and apply a very tiny bit of gel lube across the surface. I continued to play games on 5 ball mode for the remainder of the week without issue. The machine was finally done! 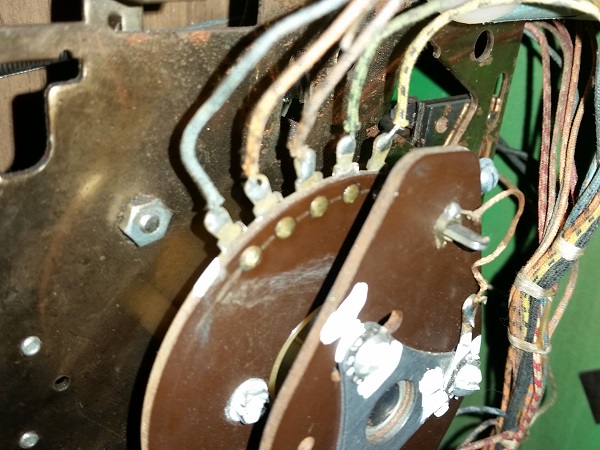 Playball is now ready to go back home. The owner purchased this machine out of a container around 8 months ago and had never seen it working to play. I think he’s going to enjoy it 🙂 Working on the machine has been an enjoyable experience – despite some of the frustration with intermittent score motor issues. It’s been the most challenging one I’ve worked on to date. As always, there are new things learnt and valuable experience gained. It’s great looking back to see a machine that arrived in a non working state, leave fully working and ready to play for a long time to come.