It’s time to once again dive into a pile of trash pinball parts and see what sort of gems I can uncover. This lot of pinball spare parts (or crap box as it’s also termed) cost under $16AU. There wasn’t anything in the original photos that caught my eye, I just wanted more spare parts available at hand for my projects. So, let’s have a look.

The first thing I wanted to dig out were all the plastic pieces. This mostly consisted of star posts. There weren’t as many as I had expected, but there was at least a few different colours and styles. A few flasher domes were also there and some plastic lane guards. A red saucer shield was included too and it’s undamaged. This would have been perfect for Pinbot as all of the ones on my machine are broken. Sadly I purchased some new ones a few days before I got this lot. Not to worry, all these parts have been cleaned and stored away for future use. 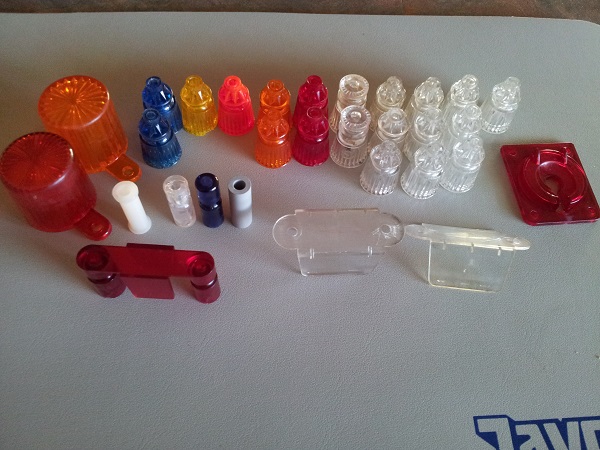 Next out of the box were a nice range of pop bumper caps. I like to find some of the older styles as they are not as readily available new and I’m keen to try my hand on more 70’s and early 80’s machines. I also came across a few small posts I’d missed earlier and another lane guard. All these parts will certainly be kept, except for the medusa cap, which is broken on the sides.

Following on from the pop bumper caps are some pop bumper bodies and skirts. The skirts cleaned up nicely, although I’m not so interested in them. The bodies however are well worth keeping and in reasonable condition. 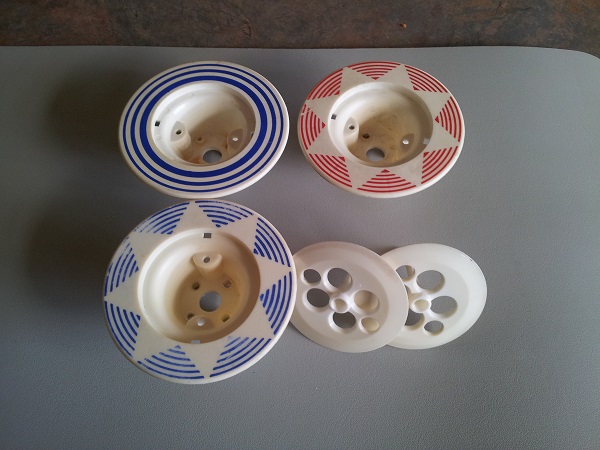 Looks like they wanted to get rid of a few buttons. Twenty five buttons in total with a few different colours and styles. Some cleaned up OK and will be kept for future use. The others i’ll set aside for people who like to use damaged buttons in their projects (gives it more character they say..)

Thankfully not as many leg bolts in this crap box. I’m going to keep all but 2 of them. The two longer rusty ones can be tossed. The others may come in handy down the track and they often clean up really well in the tumbler.

Now here are some handy parts – cable clips. I often find myself needing these when tidying up wires and cables inside a machine. Great to have some extras and in varying sizes too. This is the sort of stuff I love to find in my crap boxes. 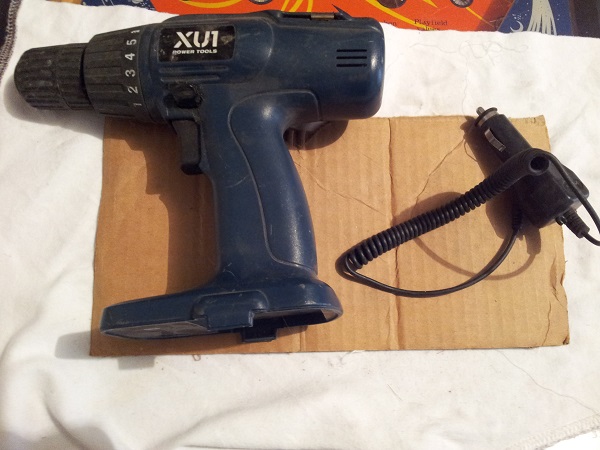 A small collection of fuses. I ran the my digital multimeter on them and they all work fine. I’m not a big fan of second hand fuses, but they may be useful as I don’t often keep a stash of fuses around. I’ll keep them for emergency use. 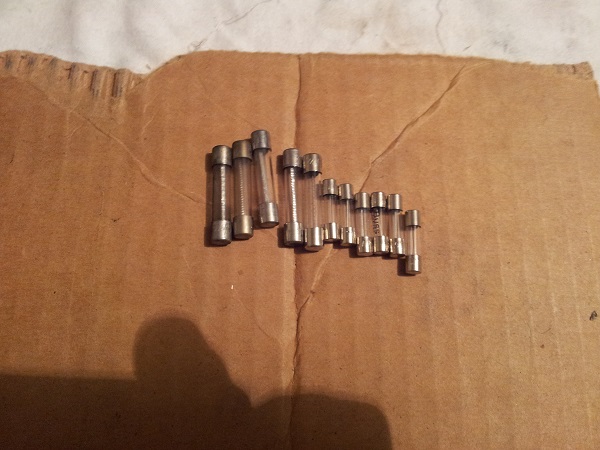 Oh wow, how about some flippers? Thirty five in total!! Most in really poor condition and I’ll only be hanging onto a small selection of them as the others would just be taking up valuable storage space and never used.

I wanted to keep the flippers with unique shafts and those which the shaft can be removed as these are certainly reusable as I found on my Nugent machine when originally servicing it. 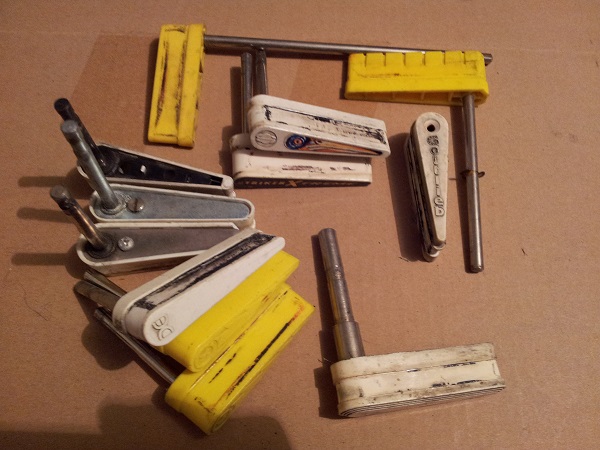 Two of the flippers have nice decals on the top, so I wanted to keep these just in case. I’m not likely to ever own either machine, but others will and do – these could be passed on if someone needs them.

A small selection of drop targets were found in among the rest of the parts. Nothing a good clean won’t fix and certainly welcome into my spare parts stash. 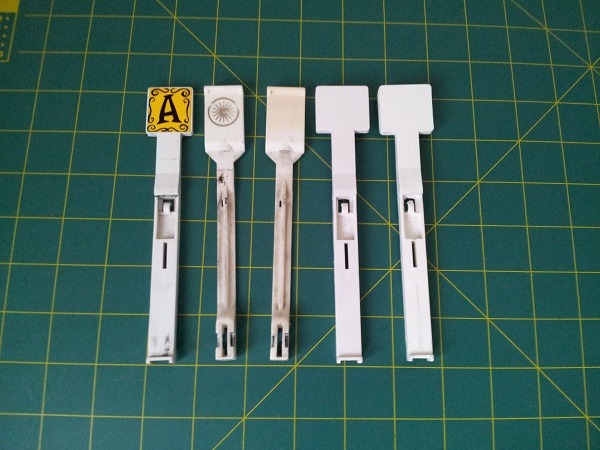 A couple of mechanical coin mechs. These are set to euro currency, but I’d like to try converting them to use 20c and $1AU coins. 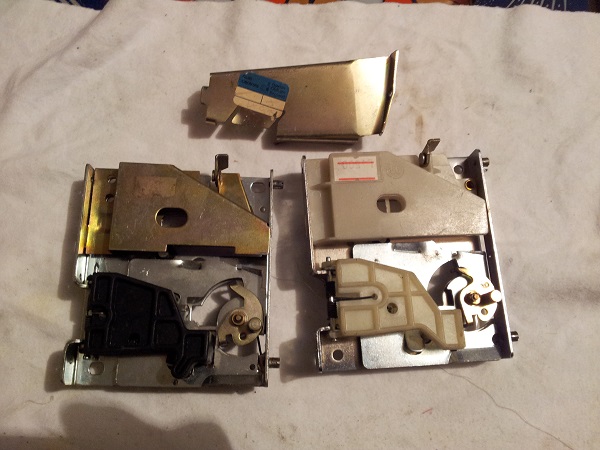 Some leg levellers that have seen better days. Not in good condition at all and i’ll most likely toss these straight away. Leg levellers are cheap enough and readily available anyway.

A set of 4 rubber feet for the leg levellers. Not very clean, but still very usable.

Here are some ever useful parts. A nice assortment of screws, bolts, washers and nuts. Some new unused ones in there too. Very happy to see these as it’s hard to know what sort of screws and bolts to stock up on for projects. Having a range helps cover you and get your past any immediate hurdles while working on a machine.

Three very well used pop bumper rings. I’d like to try running two of them through the tumbler and seeing how they come up. The third is far too rusty and will be binned. 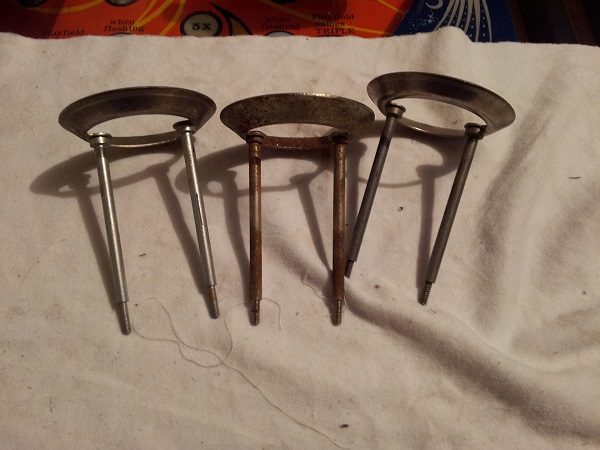 Lots of pop bumper coil frames. A few of these are OK, while the rest are no longer any good. Those worth keeping will be set aside and the others thrown out. A couple of older Gottlieb ones in there I’d like to keep. 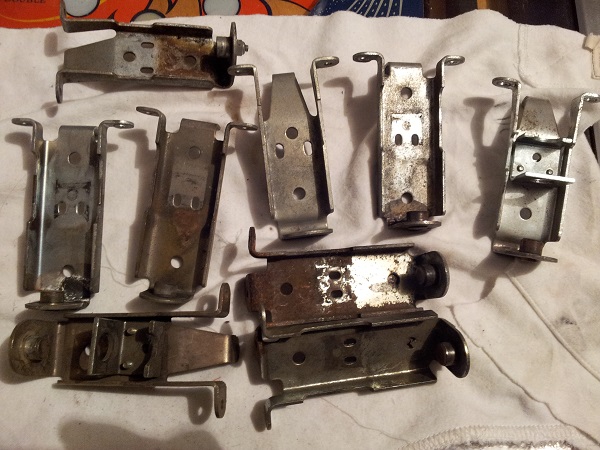 In the first crap box there were hundreds of globes. This time, only a small handful. Which is good as my spares are overflowing. These ones cleaned up and are in working order. The rest were put into the bin. 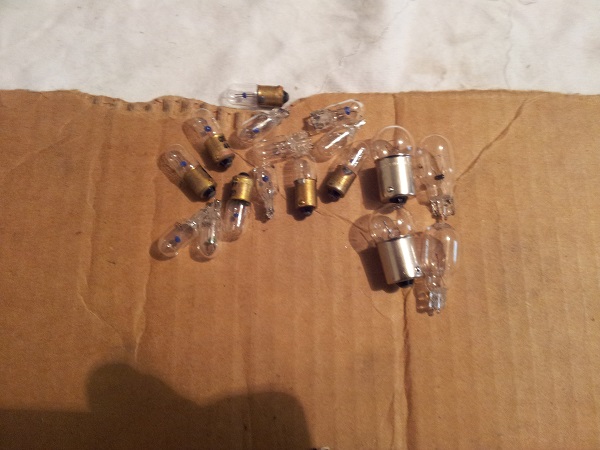 A couple of well worn ball serve assemblies, missing their coils. I know there are a few coming up in my next crap box that are in better condition than these. So I’m going to raid these for their E clips, springs and one of the striker arms. The other parts will be in the bin. 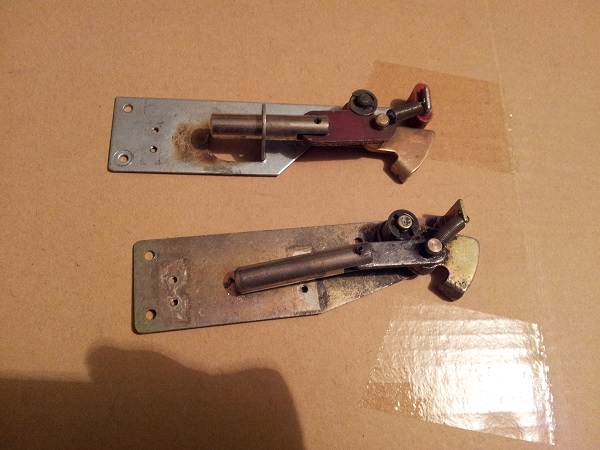 Some coin door parts with quite a few holes drilled in them. The only parts I want to keep off these are the two white return arms and their E clips. The metal parts can go straight to the trash. It’s a shame there are holes drilled in the coin acceptor frames as these could be sanded and resprayed to look as good as new.

A few different flipper assembly base plates. I’ve got a few of these now and more coming in the next crap box. I’ll keep them for now, but may toss them if better ones show up in the coming crap boxes. 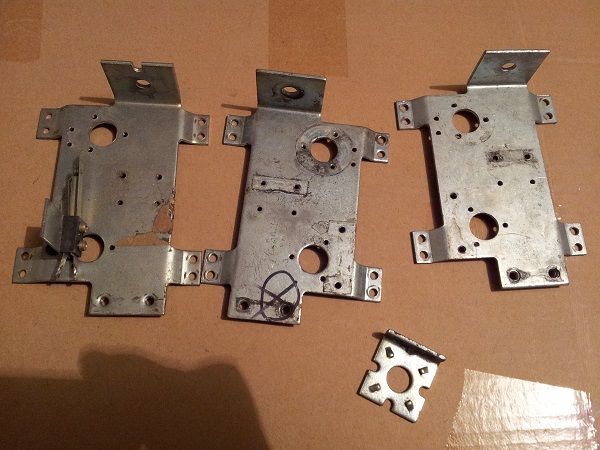 Only a single ball in this crap box. This one isn’t in terrible condition, but I really don’t want to use second hand balls in any of my pins. It’s just not worth it. The metal spacer and gate frame are worth keeping and will clean up fine. The coil sleeve is actually brand new and unused, so will keep that too. I’ll add the 3 switches to the pile of switches I’ve accumulated, but not sure how much use i’ll get from them. 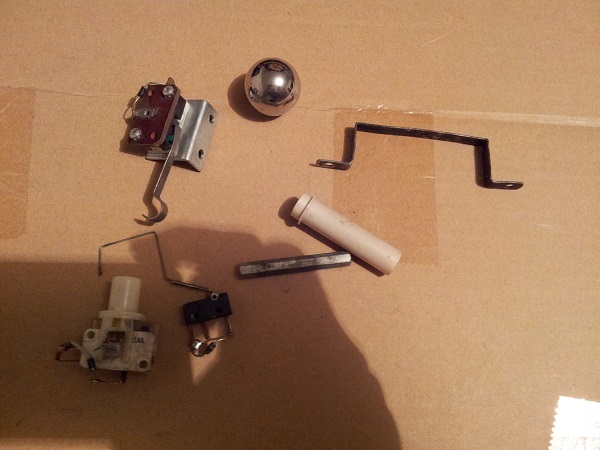 Some more random parts. A couple of small coils that i’ll certainly keep. Their assemblies are mostly trashed though. A small switch stack of an EM I think – this i’ll keep. I’ll raid parts from the blue pop bumper assembly. Both blue plastic parts are actually damaged though, so ill toss them. 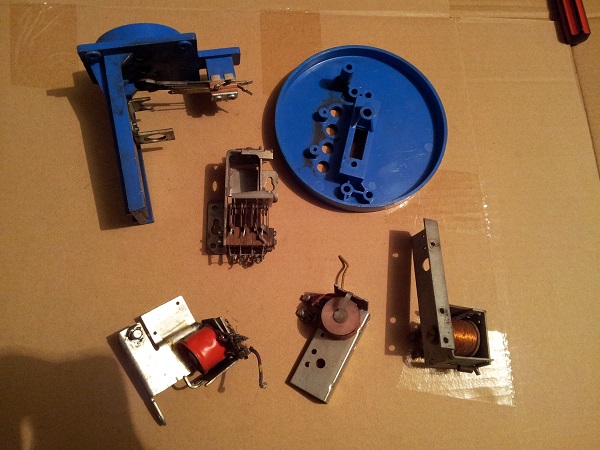 This looks very similar to the plate the motor in my Pinbot it attached to. It isn’t quite the same though as the microswitches are different, but ceratinly similar concept. 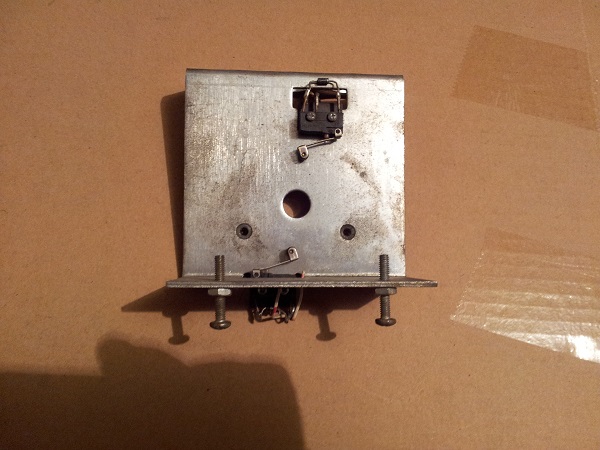 Here’s a few sling shot arms. In need of a clean but i’ll certainly keep these for future use. 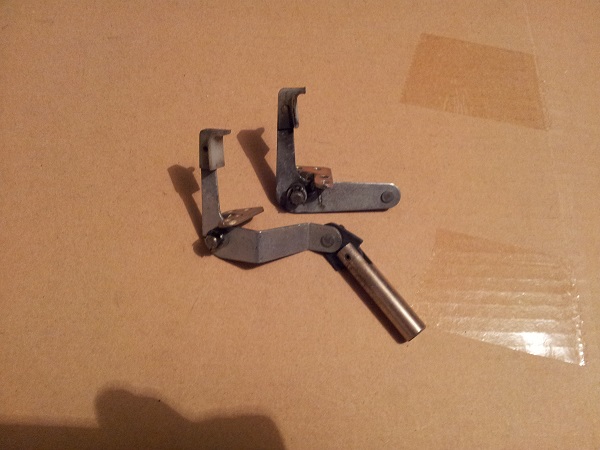 A few electrical wires. I’ve got plenty of these in my Arcade spare parts box, so these can be thrown out. 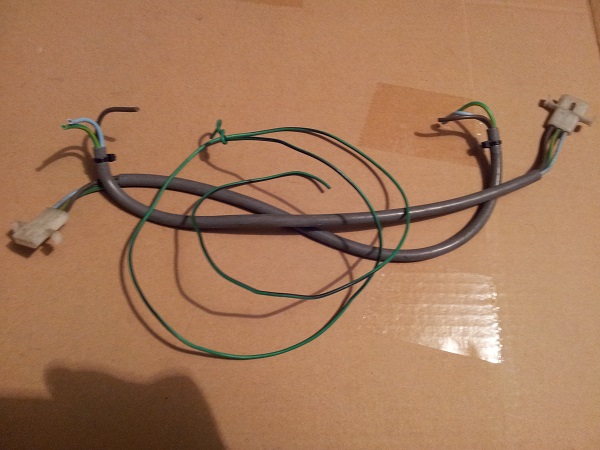 A few eject assemblies and parts. In need of a good clean, but otherwise fine to keep. 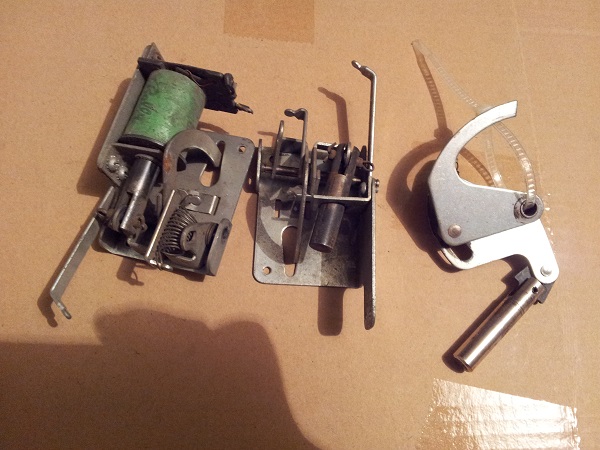 A long ball rail and two smaller ones. Both the smaller ones are missing a foot, which makes them useless since they will not be attached strongly enough to the playfield. If they were complete I’d keep them, but since they are broken, no point. The longer rail is OK though but could do with some restoring. I’ll keep it.

Lots of random parts to come, many of which I’m not too sure on. The good (unbroken) parts will be kept, which anything broken will be raided for smaller parts and the rest tossed into the bin. I’ll start with these two large assemblies. Not sure what machine they are from or if they’ll ever be any use. But they are unbroken so worth keeping either for myself or if someone in the Pinball community needs them to fix their machines.

Some sort of lamp PCB, a wooden side rail and some misc metal parts. I’ll probably toss the metal parts, but the rest I’ll keep. The PCB can be kept in case someone comes looking for it. 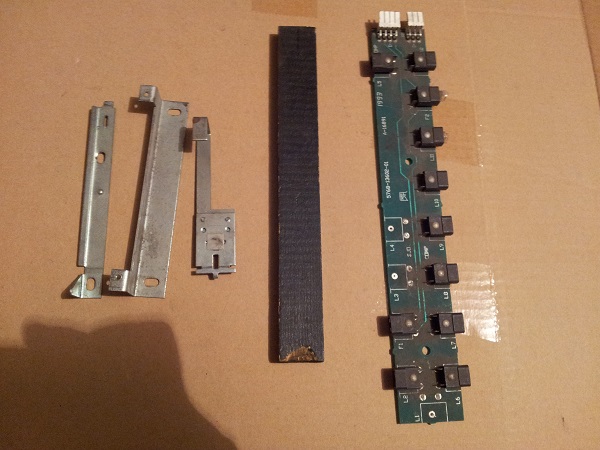 A few random metal frames from assemblies. Nothing stands out here, although none actually broken. 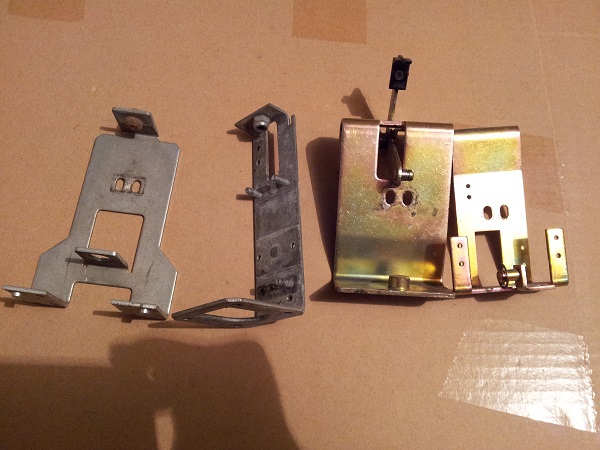 I’m not too sure what to make of these. I suspect I’ll just raid them for smaller parts as they are broken or bent in some places.

Starting to get towards the bottom of the spare parts pile now. Some random metal parts from assemblies and a #555 lamp socket. I’ll put the metal parts into the next tumbler load I do as they should clean up fine.

A random mish mash of metal frames. They are all undamaged, so I can’t throw them out although there is a lot of rust built up on the flipper button plate, which may see it head straight to the bin. I like to keep these sorts of frames since they are in reasonable (or better) condition. 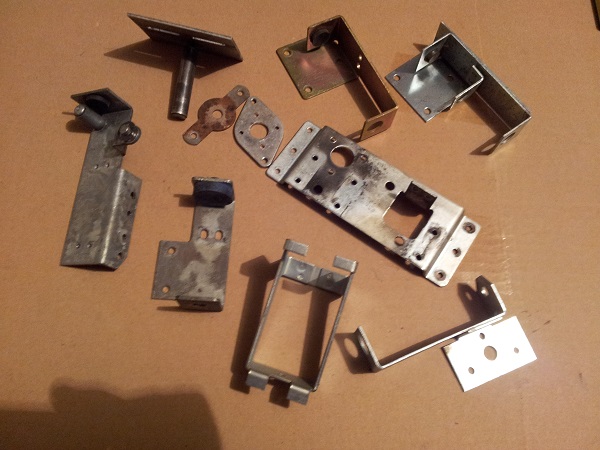 This small gathering of random parts has a few interesting things. Firstly is three lamp sockets, two of which are actually brand new. A couple of nuts in a white container. I’ll toss the container but keep the nuts. A small unbroken plastic piece. Not sure what machine it’s from and there isn’t a number on it sadly to identify it. An unused orange stationary target piece. A tilt plumb hook and some small foam pieces that sit behind stationary targets. These are worth keeping at the foam on existing targets is usually well worn or has fallen off completely. A few unused shooter rod tip – these just need a clean. Finally an old shooter rod. I’ll try cleaning it up but I suspect it’s a gonner. 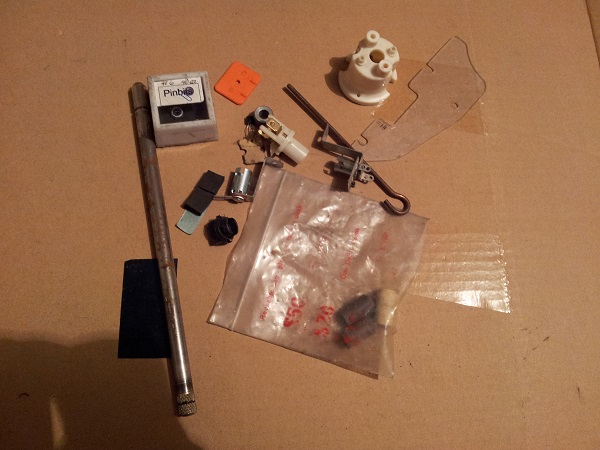 The variety in the crap boxes is one thing I love so much about them. A dead speaker was the next thing to be dug out. Shame it’s not working. Too large to be useful as a paper weight, so I think you know where this is headed. 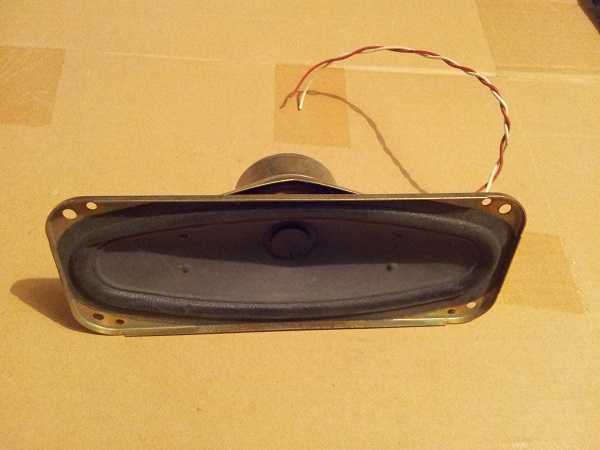 The junk I didn’t want to waste my time on. Not too much actually considering how much was in the boxes to start with. 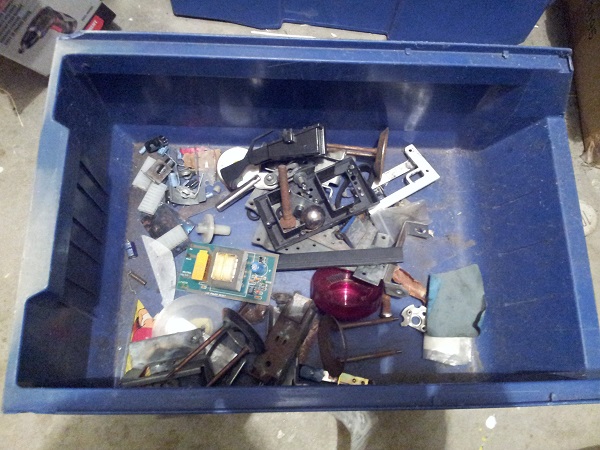 With that, the third crap box comes to an end. A bit of a mixed lot this time. Quite a lot of metal assemblies and frames. Not sure how much use those will be, but time will tell. I’d rather be overloaded with spare parts ready to go for my up coming projects than having to hunt around for things and continually being stopped while I wait for parts to arrive. For under $16, I’m happy with it – kind of hard to go wrong really 🙂