There is quite a bit of work to be done in the top area. Two saucers, an upper ramp section, pop bumpers, messenger ball, gates, mylar and a few plastics. I decided to work on the right side of the play field first, and then work back around to the left. I’m waiting on parts for the pop bumpers to arrive before I can properly service them, so i’ll be skipping them for now.

First up is the ball saucers, which allows you to trap a ball. There are two on the play field, one on each side – which allows for a 3 ball multiball during game play. 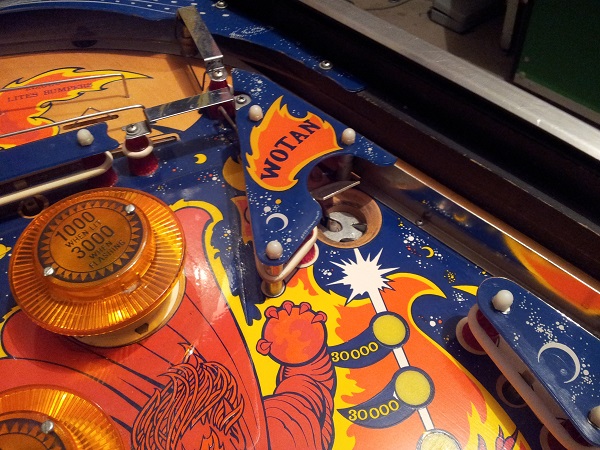 First step was to remove all the parts, ready for cleaning.

I also wanted to give the assembly under the play field a service too. 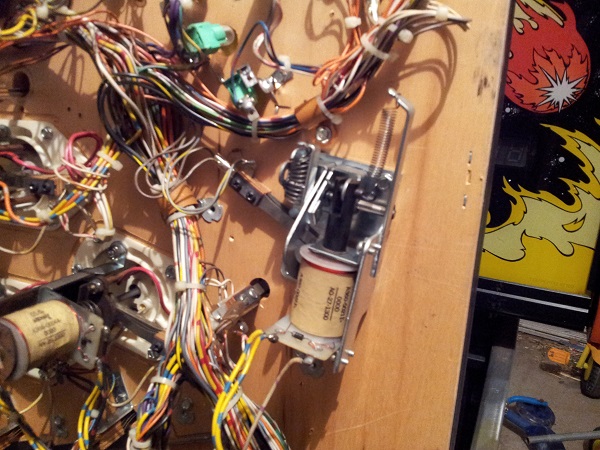 Given how much black crap was through the rest of the assemblies, I was surprised at how clean this one was. I pulled the assembly off the left side at the same time and found that both saucer assemblies were very clean. Even the coil sleeve only contained minor markings.

After giving them both a wipe over, I put it back into the play field. I was looking forward to disassembling it further, but there was really no need. The only part on both that needed a decent clean was the plate which sits facing the play field. This had collected dust and dirt from the ball. 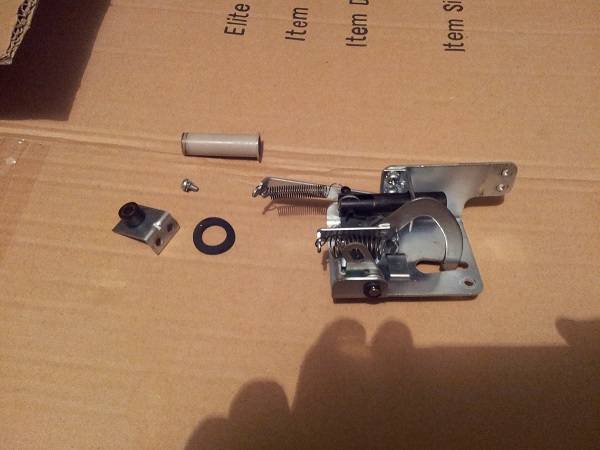 Topside, new posts were added along with new rubbers and spools. The metal posts were cleaned up, along with the metal cover that sits over the saucer. The plastic was given a good clean too with some Novus. The play field in this area was also given the Novus 2 and 1 treatment. 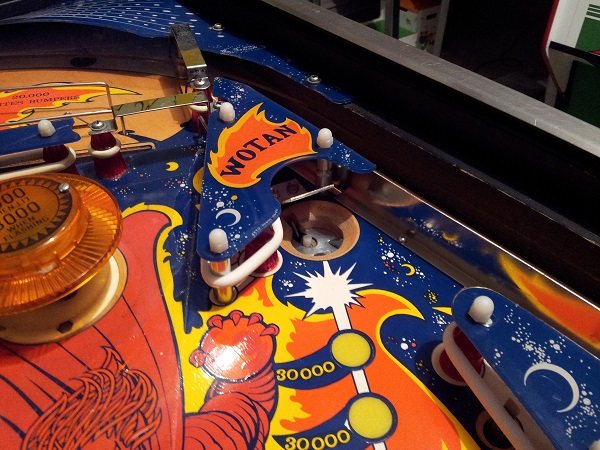 Next up is the long plastic “rail” that sits just above the pop bumpers. This plastic has interested me since I picked the machine up. When you look at it compared with the other plastics on the play field – it’s dead boring. Every other plastic piece has stars, comets, moons and even fire. This one is just plain blue. I did some searching online thinking maybe someone had replaced it – but nope – this is how it’s meant to be. How boring. 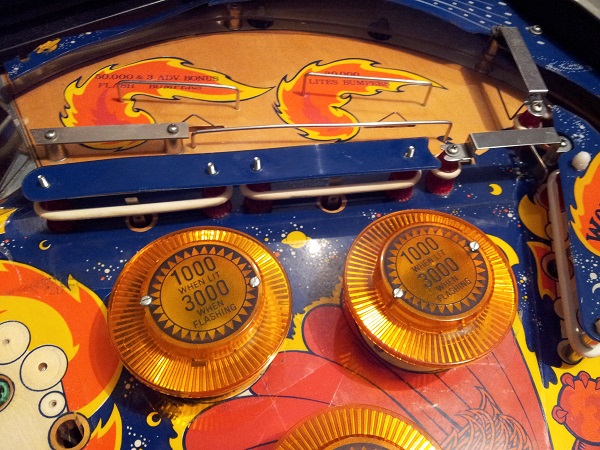 I removed the plastic, old rubbers and posts, so I could access the play field and give it a good clean. 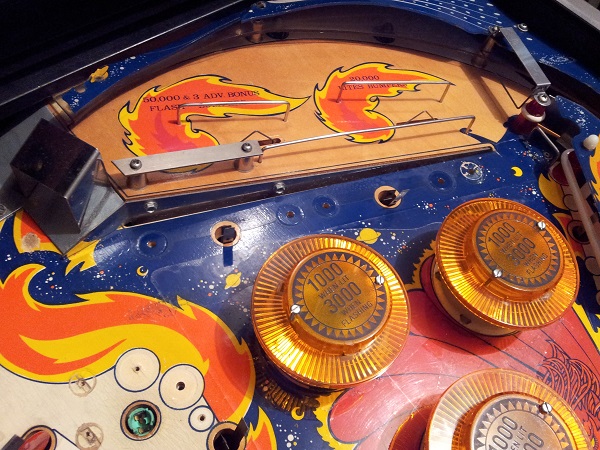 Sitting behind the posts is a metal rail that covers the raised section at the top of the play field. There is a small gap between the top section and lower section, which has collected dust and dirt over the years. I decided to remove it and give it a good clean. It’s attached by two screws on the top and three under the play field. 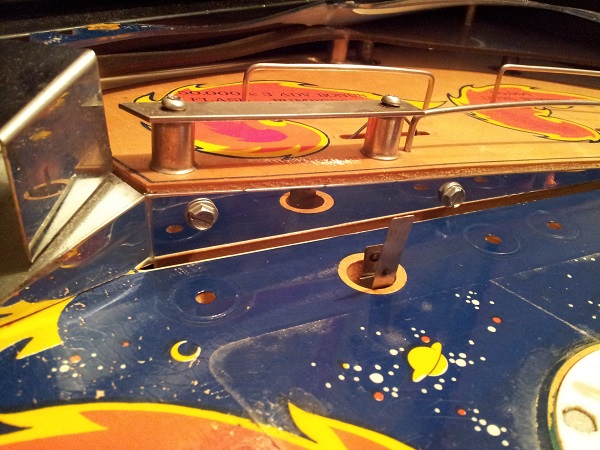 It’s a bit of an odd shape, so had to maneuver it out of the play field from the under side. You can see what’s collected there over the years. 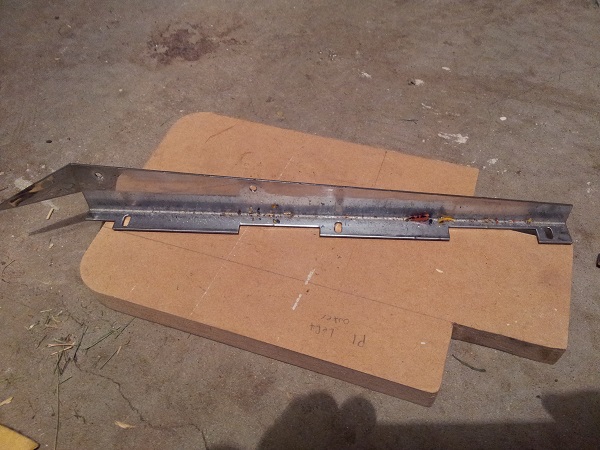 The rail was then added back onto the play field, new star posts and rubbers added. All switches were also cleaned. The plastic was given a clean too. 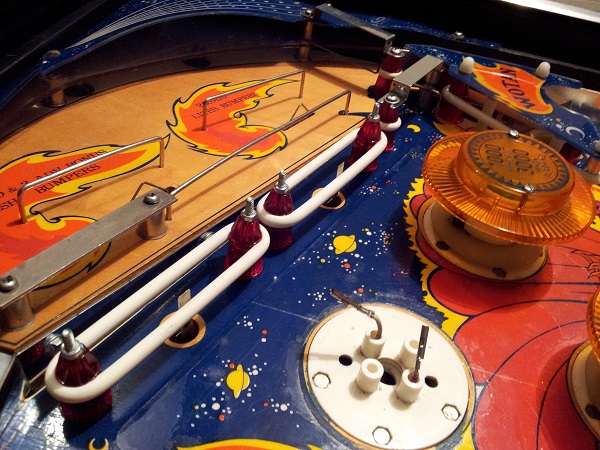 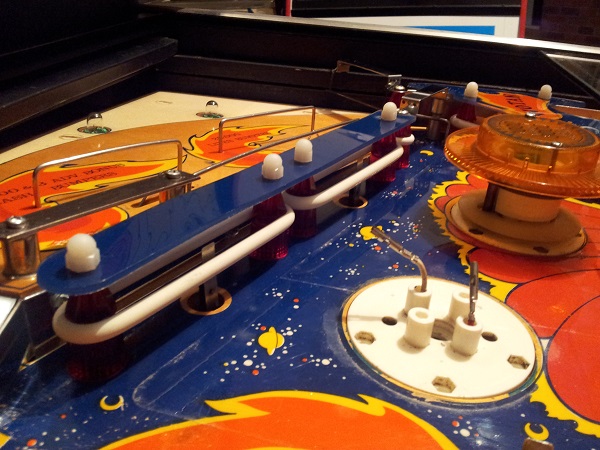