The coin door on my Nugent isn’t too bad. It has some rust, and the bolts could do with a polish, but otherwise it’s fine. I wanted to make a few minor tweaks to it though.

I firstly gave it a good wipe down and clean, removing built up dust, gunk and what looked like the remains of a drink spill. 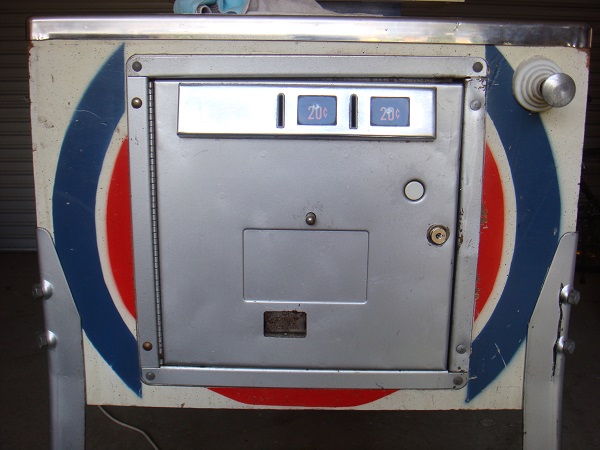 When I recently ordered a bunch of parts from Marco Specialties, I grabbed a credit decal that was found on old Stern pinball coin doors. 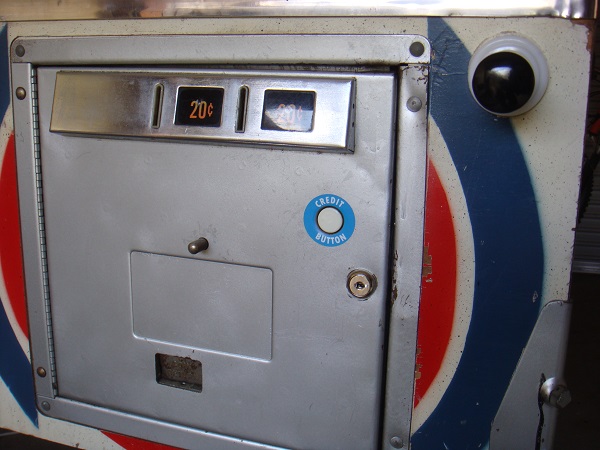 When I fired up the machine for the first time, I noticed that the light on the left coin decal didn’t light up. Opening up the coin door showed that the coin mech on the left was not installed, which would explain why the bulb had been removed. I really wanted to add a second coin mech, just so coins could be accepted on both sides.

A quick search on ebay turned one up and for $20 delivered, I snapped it up. It was already configured for 20c coins and was a match for my existing coin mech. 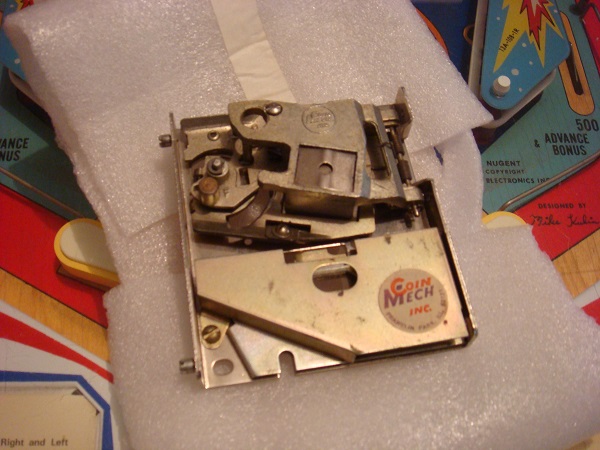 One of the previous owners of the machine had installed a microswitch in place of the second coin mech. It was attached to the frame in such a way that when the coin return button was pressed (on the front of the coin door), it would add a credit to the machine. I thought this was an excellent idea as it avoids adding new buttons to the coin door or side panels of the pinball machine. I wanted to keep the microswitch so I could easily add credits. It couldn’t remain in it’s current position and hooked up to the coin return button as it would be in the way of the new coin mech. 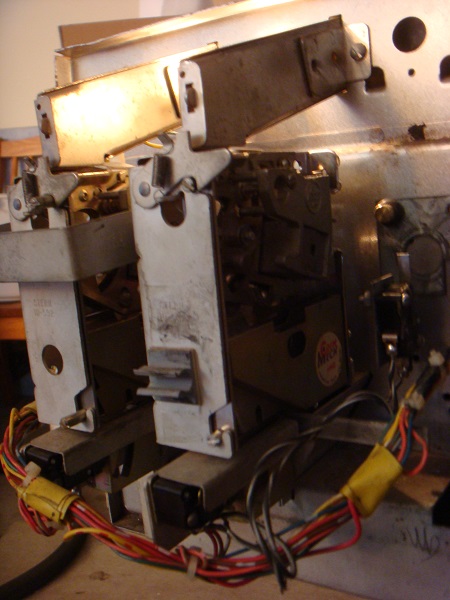 Finally, I added a cash box to collect the coins.

I’ve got some new bolts on order to replace the old tired bolts currently in use, but otherwise the coin door won’t need any further attention from me.

One last thing I wanted to adjust was the coin/game setting on the right coin mech. The coin door itself can support up to 3 coin mechs. My machine only has two installed and the plate on the front only has support for two coin slots. The middle coin mech was already configured for 1 coin = 1 game. The coin mech on the right was configured to 2 coins = 3 games.

The coin/game settings are controlled by 3 seperate sets of switched on the game board. Switches 1 to 5 control coin slot 2 (middle), 9 to 13 control coin slot 3 (right) and 28 to 30 control coin slot 1 (left). Interesting the coin slot 1 only has 3 switches available compared to the 5 allotted to coin slots 2 and 3. To achieve 1 game = 1 credit, I only needed to set switch 2 from each set to on. I had originally thought the coin mech on the right was coin mech 1 (looking at it from the inside of the door), but it’s actually coin mech 3 – which makes sense when looking at it from the outside of the door. No doubt this can actually be customised based on the wiring – but I will leave it as is.