It’s that time again for me – I begin a new project. While my previous project (Pacman cabinet) remains at the 90% complete mark, it should be coming to a close shortly. I will hopefully be posting details in the next week or so to finish that off with final pics.

So project #3. This first installment actually started a few months back. My sister and brother in law briefly mentioned they would love a cab for their cafe. I didn’t think much of it at the time since I was busy with my PacMan cab, but decided to start looking at what I might create if I was to do one. The topic came up again a few weeks back and was more solid this time. So I figured why not – I can’t really fit another one in here at the moment, and I love building them – so why not build one for someone else.

The first step was to look at what would suit them. They run their own cafe – people come in, sit down, socialise, drink their coffee/tea, then head out again. That instantly screamed a cocktail cab would suit. I considered an upright, since having built two already, I’m familiar with how to do it. But I think that a cocktail cab here would be best for them given their environment, and they agreed. Another benefit here is it will be cheaper to make. As I’ve found on my last two projects, artwork and finishing is where the real costs lay. Putting together some wood and internals isn’t expensive – but making it look nice is where it will increase the cost.

With a cocktail version in mind, I began researching other projects and styles that have been done before. Google as always turned up plenty of interesting results. I grabbed a number of pictures from the projects I was most impressed with, and began looking at them closer to see what direction I wanted to go in. Some key things I had in mind:

1) I wanted to stick to a theme
2) No multiarcade artwork if possible
3) Use a well known game (Galaxian, Galaga, Pacman, etc)

I also asked about the games they wanted to be able to play – the response made the choice of a 60-in-1 board easy. This works fine for me as I’ve used one before, and they are simple to configure and setup inside a cab. You can also use a VGA CRT monitor, which cost no more than $5 on eBay and are easy to come by.

So a cocktail build, with a 60-in-1 board and nicely finished with artwork. I wanted to avoid redoing Galaga and Pacman. Galaxian was a possible winner. But Ive seen cabs like these before. I felt like doing something different. Something I had never seen. While researching I came across pics of some Donkey Kong restorations. I started to ponder shrining a DK cab down into a cocktail. I’d never seen one – never recall playing on one (apart from a standard cocktail with Dk installed). So after some thinking about how I could make a cocktail version, I decided this was going to be it.

My first step was to plan out parts purchasing. This worked well on my pacman cab since I could group all purchases before spending to ensure I minimised postage while resourcing all the parts I required (and as much of it locally in australia too). I also took some rough measurements from the cocktail cab at work to get a general idea on the size/quantity of wood required. I was able to organise rough cuts of each panel into a single 2400×1200 MDF sheet of 18mm thickness. I just hope my cutting is straighter than my drawing… 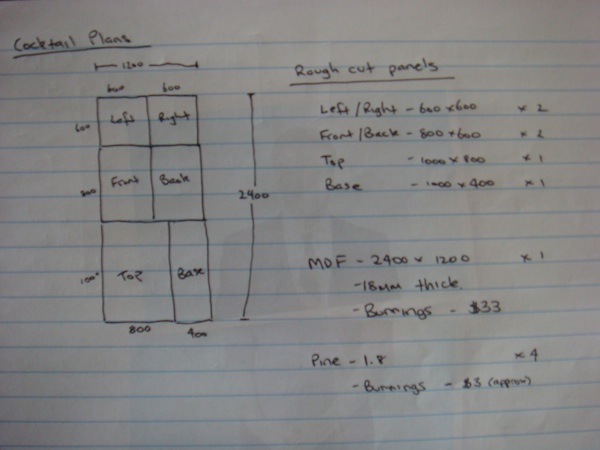 I purchased the wood from bunnings earlier today and did the rough cuts. The MDF had come down in price by $2 since my last cab – $31 for a single sheet of 2400x1200x18. I also picked up 4 x 1.8m strips of pine – more then enough and probably plenty left for the next next project (arrhg better not thing about that yet). 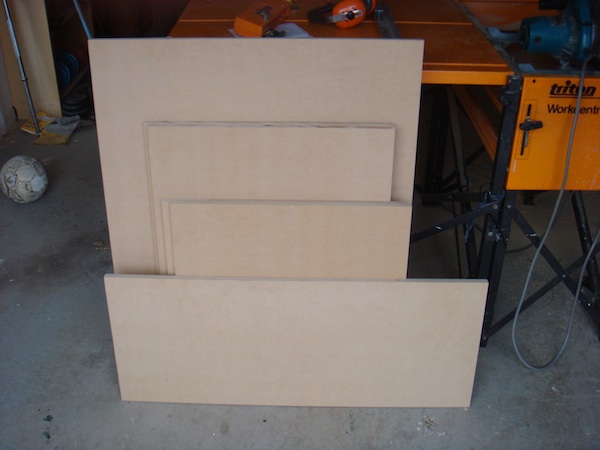 A few months back I also picked up some cocktail legs incase I ever did a cocktail project – turned out to be a wise move. $25 for the pair. 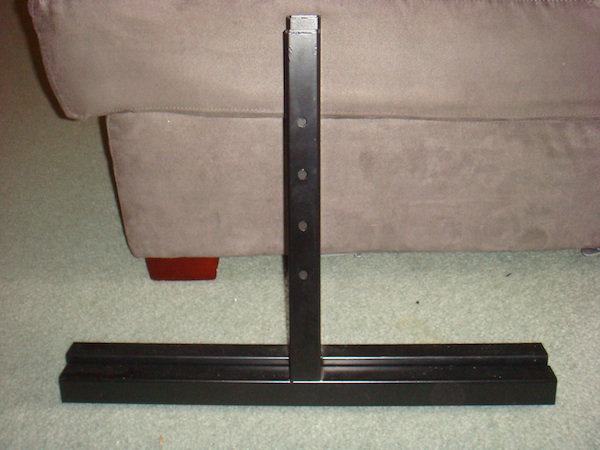 The next step from here, I will be looking at getting some more accurate measurements down for the panels, along with the control panels and how they will be fixed to the cab itself. I also need to take into consideration the size of the DK control panel artwork, what the absolution minimise size the panel can be to fit it, and how I can best apply that to a cocktail control panel. It will possibly mean the control panel is a bit larger than normal, but I guess I’ll see what I come up with I will also spent some time with the router to practice those speaker “grill” slits.