It’s that time again for me – I begin a new project. While my previous project (Pacman cabinet) remains at the 90% complete mark, it should be coming to a close shortly. I will hopefully be posting details in the next week or so to finish that off with final pics.

So project #3. This first installment actually started a few months back. My sister and brother in law briefly mentioned they would love a cab for their cafe. I didn’t think much of it at the time since I was busy with my PacMan cab, but decided to start looking at what I might create if I was to do one. The topic came up again a few weeks back and was more solid this time. So I figured why not – I can’t really fit another one in here at the moment, and I love building them – so why not build one for someone else.

The first step was to look at what would suit them. They run their own cafe – people come in, sit down, socialise, drink their coffee/tea, then head out again. That instantly screamed a cocktail cab would suit. I considered an upright, since having built two already, I’m familiar with how to do it. But I think that a cocktail cab here would be best for them given their environment, and they agreed. Another benefit here is it will be cheaper to make. As I’ve found on my last two projects, artwork and finishing is where the real costs lay. Putting together some wood and internals isn’t expensive – but making it look nice is where it will increase the cost.

With a cocktail version in mind, I began researching other projects and styles that have been done before. Google as always turned up plenty of interesting results. I grabbed a number of pictures from the projects I was most impressed with, and began looking at them closer to see what direction I wanted to go in. Some key things I had in mind:

1) I wanted to stick to a theme
2) No multiarcade artwork if possible
3) Use a well known game (Galaxian, Galaga, Pacman, etc)
END_OF_DOCUMENT_TOKEN_TO_BE_REPLACED

I have made some minor alterations to the wiring diagram I posted a few weeks ago. Mainly modifying some earthing wires, and adding in an additional earth wire for the metal control panel.

Here is version 3 of the wiring plan for the cab:

END_OF_DOCUMENT_TOKEN_TO_BE_REPLACED

I have put together an initial plan for the wiring of the cab. Most of it is very straight forward. The only tricky bit really is the power wiring. But after sketching out a few plans, and getting some expert advice from experienced cab builders, I think it has come together nicely and is fairly straight forward. Another thing I like about this plan is it should help ensure the insides of the cab are tidy, organised and easy to maintain (not to mention safety first also!). 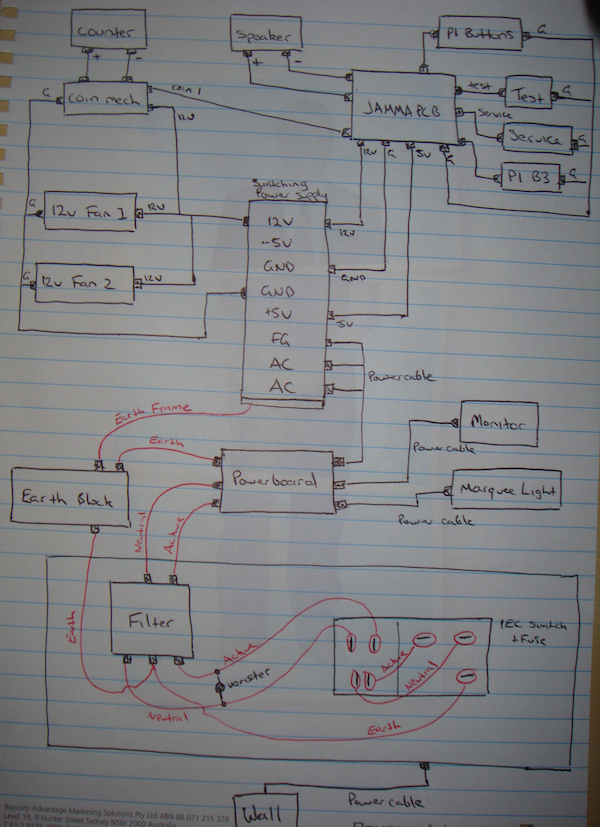 I’ve added in a filter and varister to deal with spikes that may come through, but probably the biggest decision I made was to use a power board to power the key components of the cab. This makes the wiring simpler, and certainly easier to replace, expand or upgrade features. So things like the monitor, switcher and marquee lighting can all plug directly into the power board. It will increase the cost slightly, but not much. In the end, I think its going to work really well.