Time to do some work on the coin door on my Fireball machine. On arrival it had 3 coin mechs hooked up, with some sort of modified pricing plates installed. It also contained a delightful sticker warning about the terrible content of the game.

I don’t plan to do too much with the coin door as it’s not in bad condition, but a few improvements can be made. 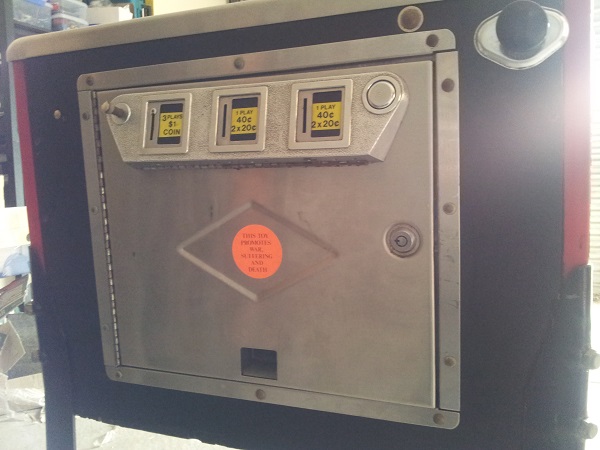 First step was to test each of the coin mechs. I opened the back glass and toggled the MPU switches to set all 3 coin mechs to 1 coin = 1 game to make them easy to test. I noticed in the manual there was no setting for free play. Not sure if this is common on Bally games, but I found it interesting. Fired the game up and tested each coin mech by putting a coin through each slot on the coin door – all working fine and registering a single credit for the coin. Two were set to accept 20c coins and the other $1 coins. My personal preference is 20c as that’s what I grew up with.

One thing I noticed missing however was the lamp from the far left pricing plate. Luckily I had a spare socket in my parts box. All the bulbs in the Fireball are #555’s, but this socket is for a #44/#47. Not a big deal as I have plenty of spare #44’s, but it just looks a little out of place – but no one will ever know…. I connected up some wires and gave it a quick test. All 3 pricing plates now had light.

While sorting out the lamp, I began tossing up what to do about the pricing plates.

The existing ones were a bit average looking. On closer inspection it looks like the plastic parts are from another region – but the pricing scratched out and a home made sticker attached to the front. The plate on the far right has Quarter printed on it – confirming they are American.

I’m a fan of inserting a coin to play – it’s part of the experience. But I had noticed that I rarely put coins into my Nugent as it always has credits available. In fact I had kind of made it a challenge to earn free games while playing to prevent the credit count from dropping to 0. Kind of like some extra challenge to the game once I had started getting good at it. My Space Orbit (an EM machine) has been set to free play, so I never put coins into that. I’d considered working out how to wire one up, but I’ve read the coin mechs on EM’s can be a source of issues, so haven’t bothered. I had a quick look online to see what sort of new pricing plates I could purchase and found some really nice Bally plates that would look good on free play. I wasn’t interested in having american pricing displayed, so decided to scrap coin play and replace the existing plates with free play plates.

The section holding the pricing plates in place folds down from the front with a hinge. It’s held in place by 4 screws accessed from inside the door. 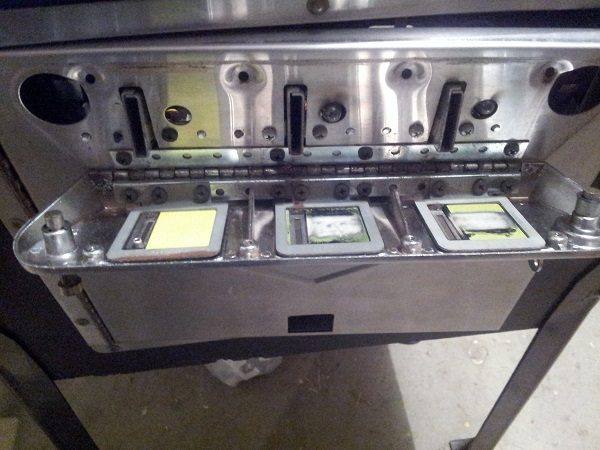 Each plate is held in place by a small metal frame which can easily be removed via two screws. 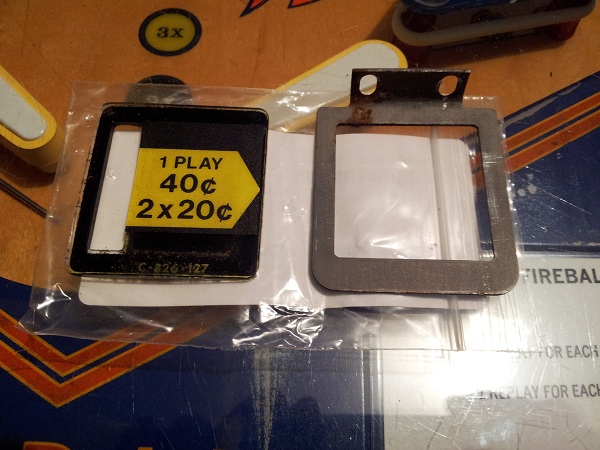 With the new plates in place, I also replaced the old lock (which I had no key for) with a new lock and also added a new Bally decal. The coin door was looking much nicer. I like having the plain Bally plate in the middle as it breaks it up a bit. 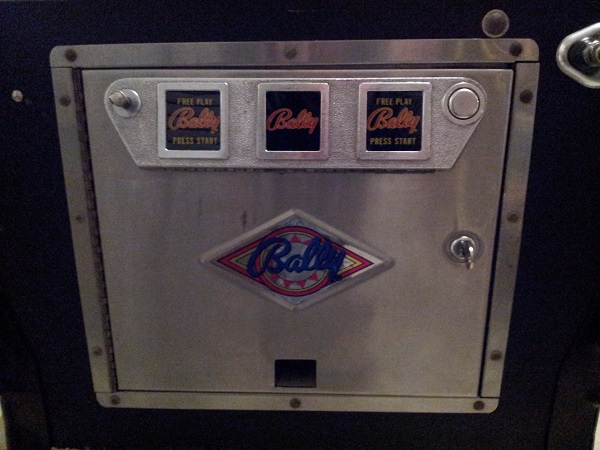 When I remove the coin door to repaint the front of the cabinet, I plan to clean the bolts up a bit to give it a slightly better look. But otherwise, I’m happy with it.

One final thing to do was make it easy to add credits without modifying the machine. I removed the coin mech from the slot on the far right since it’s the closest when opening the door. I installed a small microswitch to the back of the frame and rewired the coin mech to the new switch. This is easier to access than the switches below the coin mech and will allow easy addition of coins without any modifications to the machine.

For now though, it’s back to the play field to continue working on that.