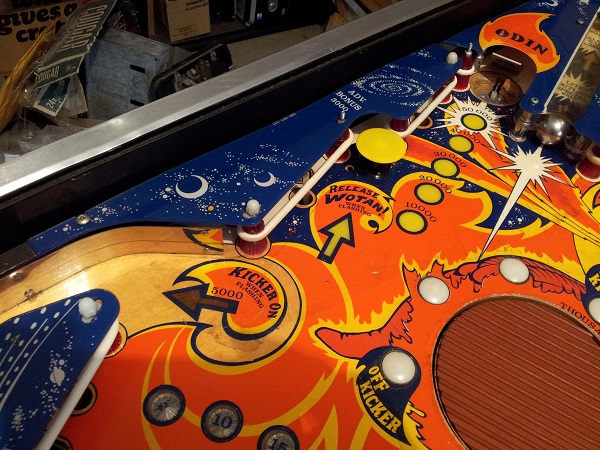 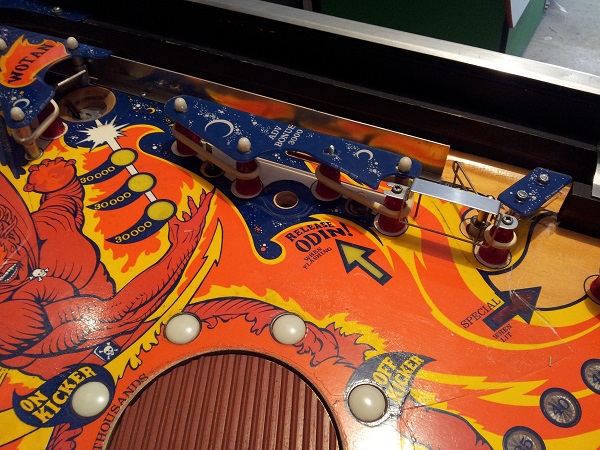 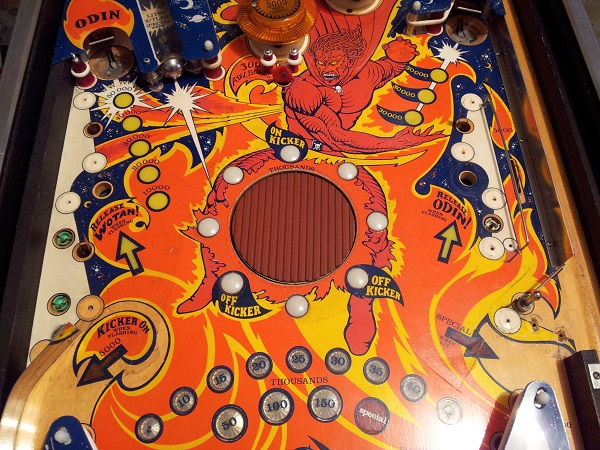 With the parts off, I continued with the mylar removal. I took things even slower this time as there were more inserts covered by the mylar. The main trouble spots were the edges of the inserts. The mylar came up alright, but as you can see on the “kicker on” and “release Wotan” arrows on the left, there was some paint lift. The arrows on the right were fine. There was also some minor paint lift around the yellow inserts leading to the saucers. All of it is very fixable.

With the mylar up and goo gone, I gave the middle section a really good clean with eucalyptus oil, followed by Novus 2 and 1.

On the right has side of the play field is a gate which allows the ball to return to the shooter lane, or guides it back into play. Since I was in the area, I thought I would take the opportunity to service the gate assembly and give the area a good clean too.

One thing that concerned me here was the gate rests on a thin (and weak) metal post. When the ball is ejected from the saucer up higher, it can hit the gate with some force and this has slowly started to push the metal post back, causing it to bend.

Note that the image was taken before the mylar was lifted from the middle play field and shooter lane areas (you can see the cracks and dirt in the mylar easily enough). 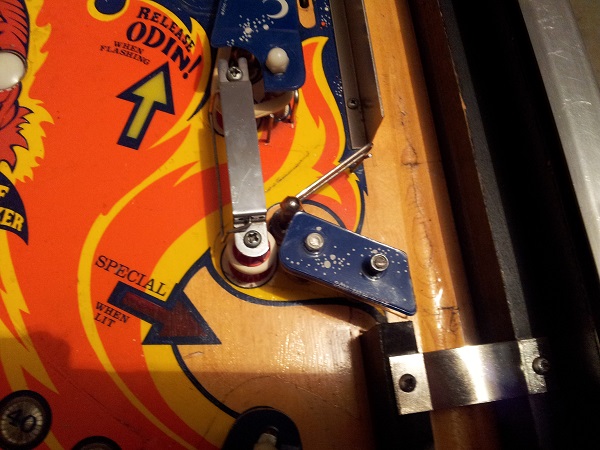 Under the play field, the gate assembly is pretty simple. It’s a very small coil, arm and bushing.

Although it was reasonably clean, I still wanted to pull it out and inspect it. When the small coil energises, it pulls the arm in, causing the gate to close. When it stops, the gate returns to it’s open position. 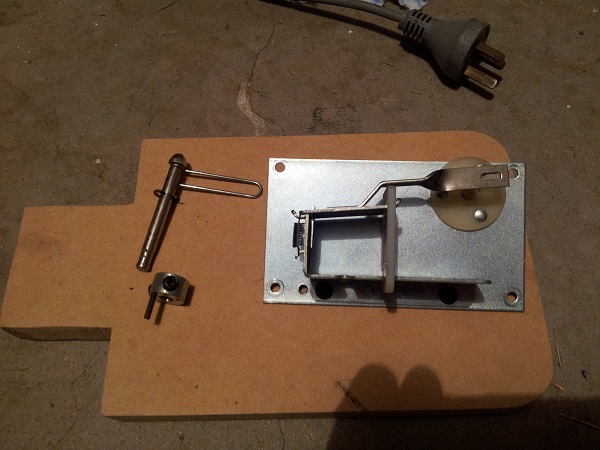 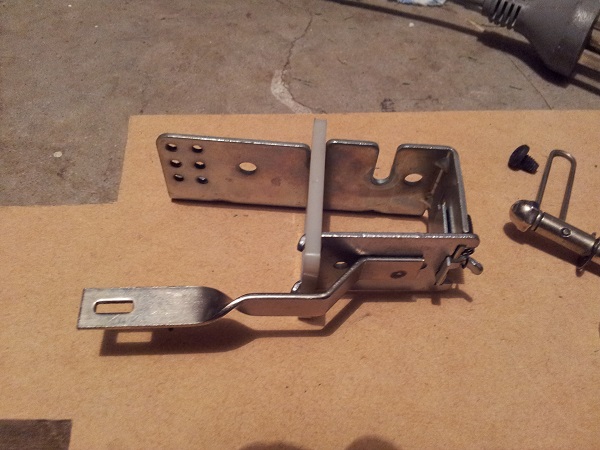 With everything cleaned, it was time to put it back into the play field. Top side, the plastics and bolts were also given a clean too. I straightened up the small metal post. 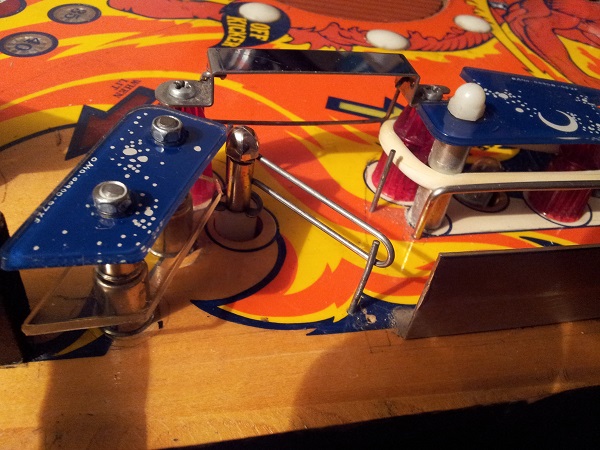 I rolled a ball down the lane a few times to see how the metal post would hold up. Sadly it started to bend straight back again. I noticed a small hole next to it where either something existed before, or I could add another post (see above image).

I tried a few different posts with rubbers, but they were all too wide. It caused the ball to get stuck in the lane. I did some googling to see what other people had done, and noticed that one person had put one of the white spacer spools (found under the slingshots elsewhere on the play field) in that spot.

I had several spare from the ones I replaced. I cleaned it up and gave it a try. You can also see the difference removing the mylar has made in that area. The cracks and dirt from the shooter lane are gone and the play field is looking much cleaner. 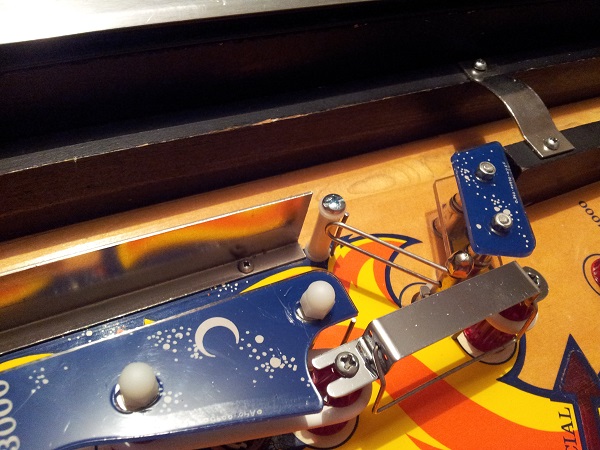 The spool post made a huge difference. It offered the gate much more support from the ball rolling down the lane, but still allowed enough room to not trap the ball.

With that done, the two sides of the middle play field area were also put back together with new posts and rubbers. 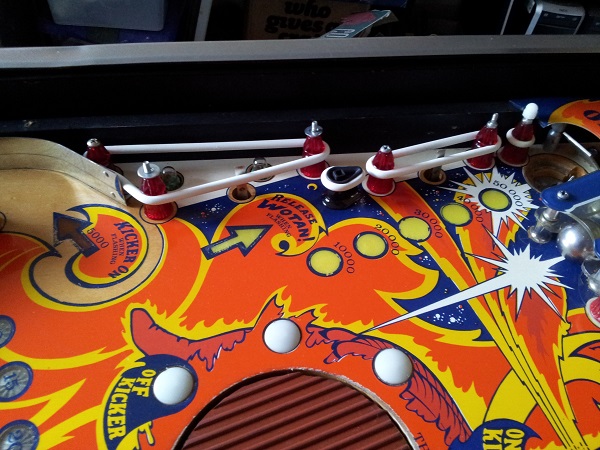 With the plastics cleaned and added back on, the middle section was now complete. The middle play field area now looks much cleaner. It needs some minor paint touch up on a few of the inserts which I’ll be doing shortly. 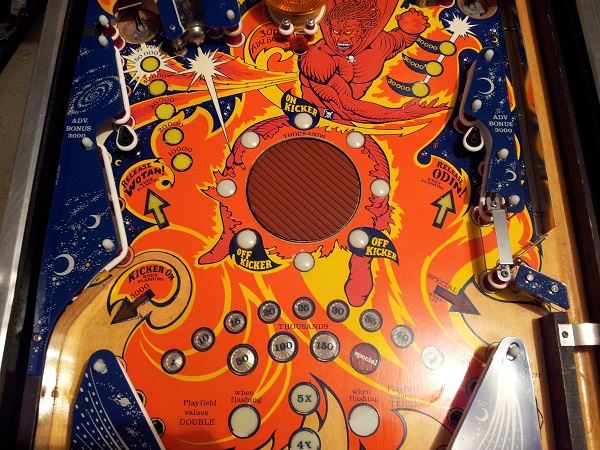 Before I moved on though, one last thing to look at was the metal rail that divides the play field and the shooter lane. Since I was working in the middle area of the play field, I decided to remove the metal rail and give it a good clean. Removing it allowed me to give the area on both sides of it a good clean, and also lift some more of the mylar covering the shooter lane. 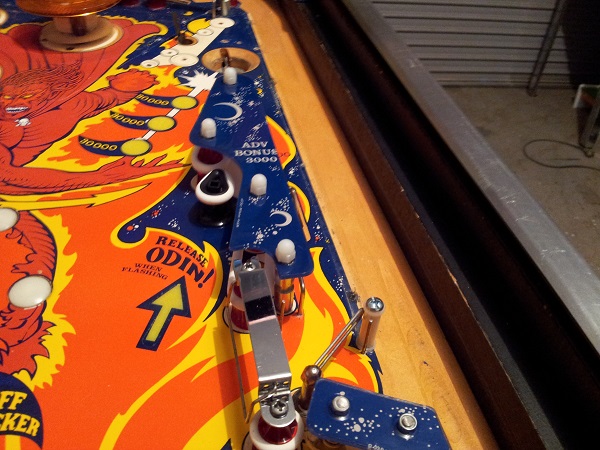 So that’s the mid section on the play field taken care of. I need to return for some paint touch up and servicing the spinner. But for now, I’ll continue working up and look at the saucers next. I also have 3 new yellow mushroom caps on order which will arrive soon enough and will be added.